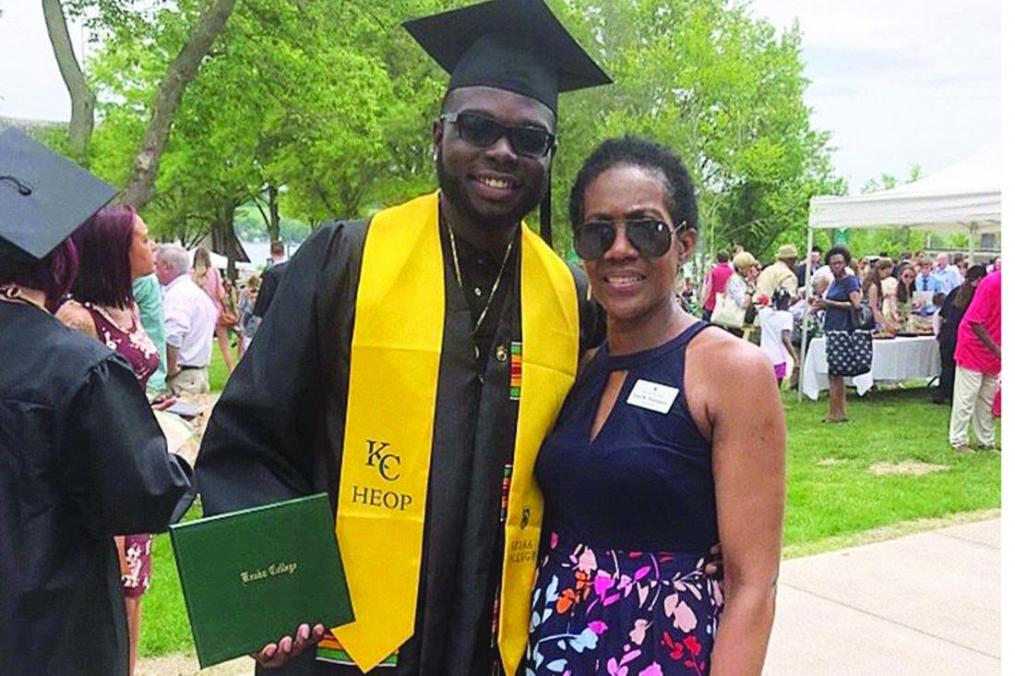 Marvin Duncan '18 poses with HEOP Director Lisa Thompson during his May 2018 graduation.

When Marvin Duncan ’18 was growing up, he learned an important lesson at an early age—the better things in life will never come easy, and you have to work hard to obtain your goals.

Marvin took that lesson to heart when he enrolled at Keuka College.

“Keuka College has many great qualities that interested me,” he says. “I was born and raised in Brooklyn, N.Y. —a.k.a. the ‘concrete jungle’—and the beautiful lake scenery is what initially sparked my interest.”

HEOP is committed to offering higher education opportunities to New York state high school graduates and GED holders who do not normally meet admission criteria but have the potential for success at Keuka College.

As an HEOP recipient, Marvin was required to attend a mandatory summer program before his freshman year. A critical component of HEOP, the Keuka College Summer Institute provides students with a stronger foundation to be socially and academically prepared for the years ahead. Students are engaged in a four-week accelerated and intense program that challenges, prepares, and provides them with a smoother transition to college.

According to HEOP Director Lisa Thompson, the program also benefits the College.

“It draws from a diverse cross-section of students in New York state. In addition, these students are financially disadvantaged. HEOP is the vehicle that provides the opportunity for students who show potential to attend Keuka College and showcase their abilities,” Lisa says.

After attending the Keuka College Summer Institute, Marvin realized he was not as academically prepared as he believed he should be for college-level coursework.

“During this time, I began to develop the analytical and writing skills that are so crucial,” says Marvin, who was initially a psychology major. “During the first few weeks into the fall semester, I became increasingly homesick and unsure about my school choice. But Chevanne DeVaney [former HEOP director] was very influential during my freshman year and served as a major source of emotional support. She helped me assimilate into the campus lifestyle and, with her guidance, I managed to successfully establish myself.”

As Marvin became accustomed to College life, he says, establishing his social life became a priority and “unfortunately, my academics suffered.”

“After obtaining a GPA that I was ashamed of, I decided to be a better student,” says Marvin. “I chose to change my major from psychology to social work because I believed that social work was a better fit for my personality and future career goals. I am fascinated with clinical social work, and one of my professional goals is to become a supervising social worker or a program director.”

“Lisa was very supportive and quickly assumed an active role in a smooth transition,” says Marvin. “She motivates me during my lazy moments, and has taught me the importance of not taking blessings for granted.”

“Something happens when our students let go and trust the process of growth and development—transformation occurs,” says Lisa. “I see it every day. And Marvin was able to push through despite the numerous financial, familial, and academic obstacles that he faced. He has managed to do well academically and socially with tremendous grit and resilience. And now, he is pursuing his master’s degree in social work at Keuka College.”

Part of learning to engage with other people was meeting those with different values and beliefs. While growing up, Marvin says, he was influenced by Afro-Caribbean heritage and the teachings of Christianity.

“Once at Keuka College, I became exposed to individuals who were different than myself, and I began to challenge many of the traditional and religious values that I held,” says Marvin. “It took much self-reflection, and deep conversations in order for me to finally develop the skills, and an open mind, to be unbiased and non-judgmental.”

“The racial diversity is most apparent, however, as our program also celebrates other types of diversity like geographic, ethnic, and religious differences,” says Lisa. “As a result, our program has a uniqueness to it, one that might not be shared with other institutions.”

Through his experiences and the lessons he has learned, Marvin has some advice for those who may find themselves in a similar situation.

“Be yourself. It makes it much easier to find people you can relate with when you express your true self,” says Marvin. “Improve your time management skills, and keep an open mind to new people, thoughts, cultures, and lifestyles. Utilize all financial and academic supports offered to you, and take your Field Period® experiences seriously.”

It Takes a Campus

Marvin’s academic support has come from a variety of faculty and staff members from across campus.

But it’s Lisa whom Marvin believes is his loudest cheerleader.

“From assisting me with scheduling classes, to referring me for internship opportunities, to letters of recommendation for graduate school,” Marvin says, “Lisa has been my biggest advocate, resource, and confidante during my recent years at Keuka College.”

“Through the support of the program, lives are changed, and dreams and potentials are realized,” says Lisa.

Marvin’s dream is to have a successful career as a social worker. The next step to that career is earning his master’s degree.

“With my choices selectively narrowed down to two graduate programs, I decided to attend Keuka College because I already have an established network of peers, professors, and professionals in the field through internship and volunteer experiences,” says Marvin.

After graduation, Marvin intends to sit for the licensure exam. He would like to pursue a career in a state- or county-funded social work position within a clinical setting.