Art and Design majors Sarah Tower ’22 and Sydnie Brown ’22 share the experience of fulfilling an academic requirement with good planning, hard work, and plenty of flare. 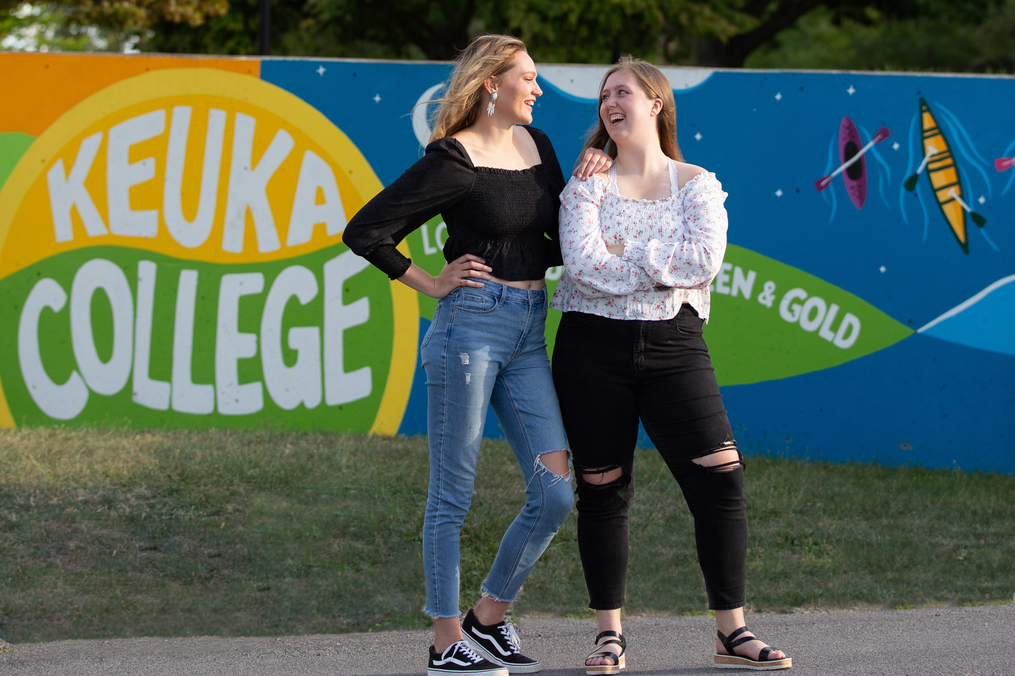 Art and Design majors Sarah Tower ’22 and Sydnie Brown ’22 continue to attract attention for the colorful mural they created this spring on the campus of Keuka College.

The learn-by-doing credo that defines a Keuka College education has seldom been more colorfully displayed than in a recently created on-campus mural.

Art and Design majors Sarah Tower ’22 and Sydnie Brown ’22 joined forces to turn their Senior Capstone project into a public display of art. The mural, located on the wall between Lightner Library and North Avenue, was completed just in time to welcome friends and families to the College’s 113th Commencement ceremonies this spring.

The artists recently shared the origins of their project with the Penn Yan Chronicle-Express. They discussed developing their mural-painting skills alongside a Holiday Inn Express swimming pool in Cooperstown, how they coordinated with College faculty and staff to bring their concept to reality, and their biggest challenge in completing Keuka College’s favorite new hot spot for selfies: western New York weather.

Sydnie said she and Sarah have been amazed by the impact the mural has had on the local community.

“(We) felt like it would be a great way to leave our mark on the place we had spent the last four years,” the pair added.

Read the entire interview online and watch for Sydnie and Sarah’s latest project on campus later this month. The two helped create a series of informational panels for a Finger Lakes Museum traveling exhibit. Several of the panels will be installed on campus as part of the College’s Saturday, Oct. 29, Fall Open House.