Jim Crowley '93: From Keuka College to Division I Basketball

The Division I coach brings the authenticity he valued at Keuka College to the Providence College women’s basketball program. 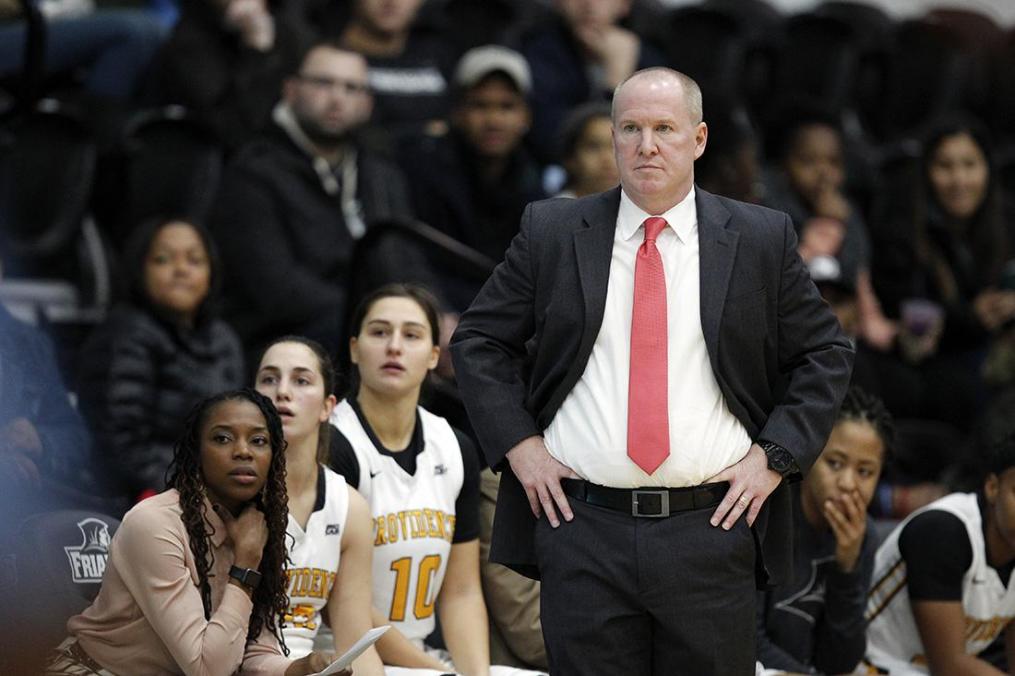 There was no madness this March for the Providence College women’s basketball team and its second-year coach, Jim Crowley ’93.

But if it is true that what’s past is prologue, it is only a matter of time.

After all, Jim’s 20 years with St. Bonaventure University women’s basketball team – including 16 seasons as head coach – were replete with success. He built the program from a Division I doormat to its first 20-win season, then followed with five more. He led the team to its first post-season appearance in 2009, its first NCAA Tournament in 2012 (and a second in 2014), and its first Atlantic 10 title. He was a three-time Atlantic Coach of the Year and ESPN.com National Coach of the Year in 2012.

No surprise, then, that Jim was recruited by Providence.

“They’ve had struggles over the past couple of decades, but we’re seeing some progress,” he says. “People always talk about wanting to turn the corner, but there are just so many corners. That’s the thing. And some of the corners are really big.”

Indeed, the team recently capped its 2017-18 season with a record of 10-21. But Jim, who endured half a dozen such seasons with the Bonnies, says tough times are part of the learning process.

“One of the things that’s really important is an attitude that you’ve got to be able to learn from losing – to learn what needs to be done better,” he says. “That’s easy to say. But it’s hard to do because everyone is in this business to compete.”

So the focus out of the gate has been building the right kind of culture, he says.

“There are people at other schools who, it’s all about, ‘Hey, we’ve just got to get players,’” Jim says. “Our thought process is that it’s a lot more about getting the culture in place and making sure we stay consistent with what that culture is. Then we recruit players who share that mindset.”

Does Jim pull from his Keuka College experience as he goes about building a culture of winning at Providence College?

“Absolutely,” he says. “Daily! When we were there, Keuka College, to be very frank, had difficulty in getting name recognition going against the ‘UofRs’ and the St. John Fishers and the SUNY schools. We didn’t have the same resources they had, so we had to find different things. We had to be very resilient. We still had to find ways to be successful.

Still, the relatively modest resources were also a reflection of one of the College’s strengths, says Jim’s mother, Shirley Crowley: Its size.

“That’s why we liked Keuka College: It was big enough to get the education he wanted, yet small enough where we felt he would get opportunities to succeed,” she says. “We didn’t even look at any other schools after visiting Keuka College. We knew that’s where he wanted to go.”

Jim agrees the College offered him ample opportunity, not only educationally but to play basketball and assume the responsibilities of team captain. And his success was such that he was inducted into the Keuka College Athletics Hall of Fame in 2012. But he says there was another almost indefinable element at the College.

“You’ve got to really, really search for ‘the authentic,’ and usually you’ve got to really peel the layers back for that,” says the Adolescent English Education major. “I never felt like that’s something you have to work for at Keuka College; it’s there. What you see is what you get. It’s there and it’s real.”

That authenticity was what drew Jim to the College in 1989 when he himself was recruited by then-Coach Sweet for the basketball team – on which he would be a standout for the next four years.

“Like a lot of Keuka College alums, I was the first one from my family to go to college,” Jim recalls. “My parents had some trepidation, they had to make the investment. … But the bigger part for my parents (was), ‘what are the people like?’ They just wanted me to be a good person and everything else would fall into place. We visited the College, and everyone we met was very authentic. That’s a tough thing to find. And we felt it right away.”

And the opportunity to assist Coach Sweet cemented Jim’s career direction – and launched him on an arc from Keuka College, where he coached the women’s basketball team for three years after graduating, to Division I St. Bonaventure to Providence College.

Still, he stays tied to the people he met – and the memories he made – at Keuka College.

“What’s surprising, looking back on it as an adult, was that every day was good,” he says. “I stay in touch with teammates and roommates and we still talk about it. I mean, we struggled too – we had some tough times … but every day was a really good experience.”