The double major has been nominated for Keuka College’s Student Employee of the Year award. 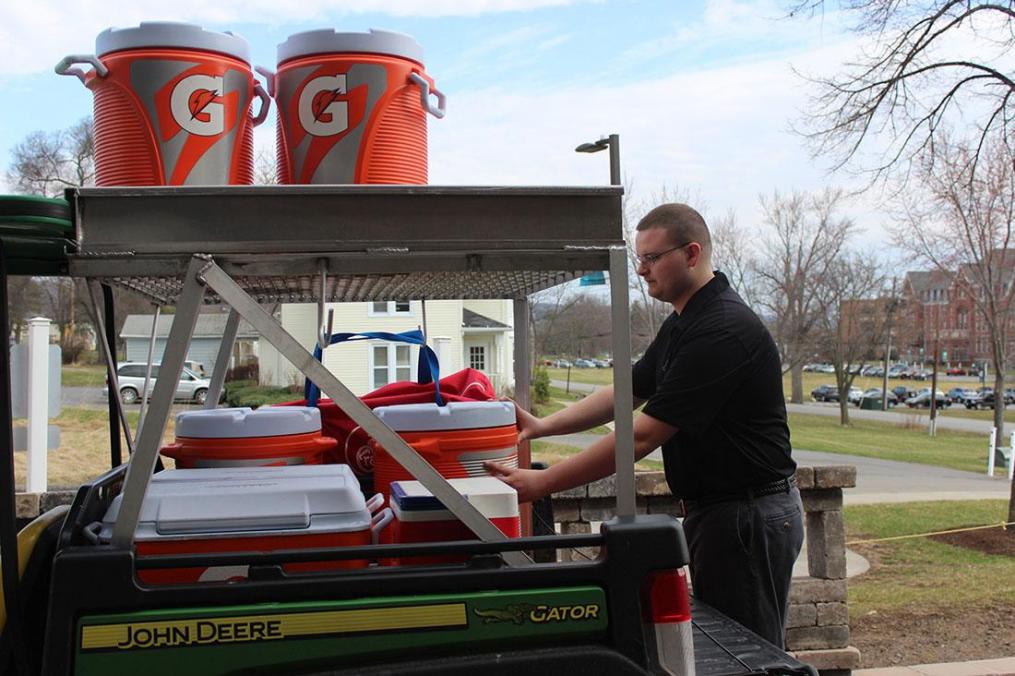 Among Justin Latz '19's responsibilities as a senior athletic training room assistant is to ensure the athletes he helps care for stay well hydrated. Justin was nominated for Student Employee of the Year.

Before Associate Athletic Director Jeff Bray considers nominating one of his student workers for Keuka College’s Student Employee of the Year award, he thinks carefully about his choice. The award recognizes student-employees for their hard work and contributions.

Some of Jeff’s criteria include showing sustained excellence over the entire course of employment, and making an impact greater than expected. This year, senior Justin Latz, a dual criminology/criminal justice and business management major from Cicero, checked all of Jeff’s boxes.

“Justin is an outstanding example of what a student-employee can be,” says Jeff. “This is his fourth year working in my department, and he has never disappointed us. As a senior athletic training room assistant, he has stepped up to play a key role in helping to train the underclassmen that will eventually taking on his responsibilities.”

Some of Justin’s responsibilities include assisting in daily athletic training room functions, practice prep, and field/gym set-up, as well as helping with recording of injuries, treatments, and rehabs. He must also provide assistance with emergency procedures, and be CPR/AED-certified, among other requirements.

“In his position, the time spent outside in inclement weather is significant ... I don’t think I have ever heard Justin grumble, complain, or negatively comment on the situation,” says Jeff. “He just deals with it and moves on.”

“When there is an event that I am covering and I ask what student is assigned, when I hear the response ‘Justin is working,’ I just smile knowing we will be good to go,” says Jeff. “He is the go-to guy, and has consistently exceeded our expectations.”

One example of exceeding expectations: Jeff was walking through the RAC when he came upon Justin and two new student-employees carrying loads of laundry.

“He just looked at me and said, ‘I figured it was time to teach them how to do the laundry,’” says Jeff. “He just knows that it is a task that must be done daily, and he took it upon himself to teach the new hires. No task is beneath him, and he consistently demonstrates that as a senior he is willing to do the task, regardless how small and insignificant it may seem.”

Jeff says Justin’s background as a volunteer firefighter lends itself very well to the job.

“He comes equipped with an outstanding work ethic,” says Jeff. “He consistently sets the bar high for the underclassmen that work with him, and leads by example on a daily basis. He is just so dependable and conscientious, whatever is on the schedule for him is going to be done, and it will be done well. He knows what the level of expectation is and never disappoints.”

In fact, Jeff has worked at the College for some 27 years, and he says Justin’s level of work “ranks easily in my top five” student-employees.

“Justin has been outstanding since year one, and has just continued to improve in so many ways,” says Jeff. “He will be missed by our professional staff and his peers. It will be a pleasure to see where he goes from here, though I can promise you, he will be successful in whatever avenue he takes.”