The Penn Yan resident and Keuka College official is honored for her dedication to serving her community. 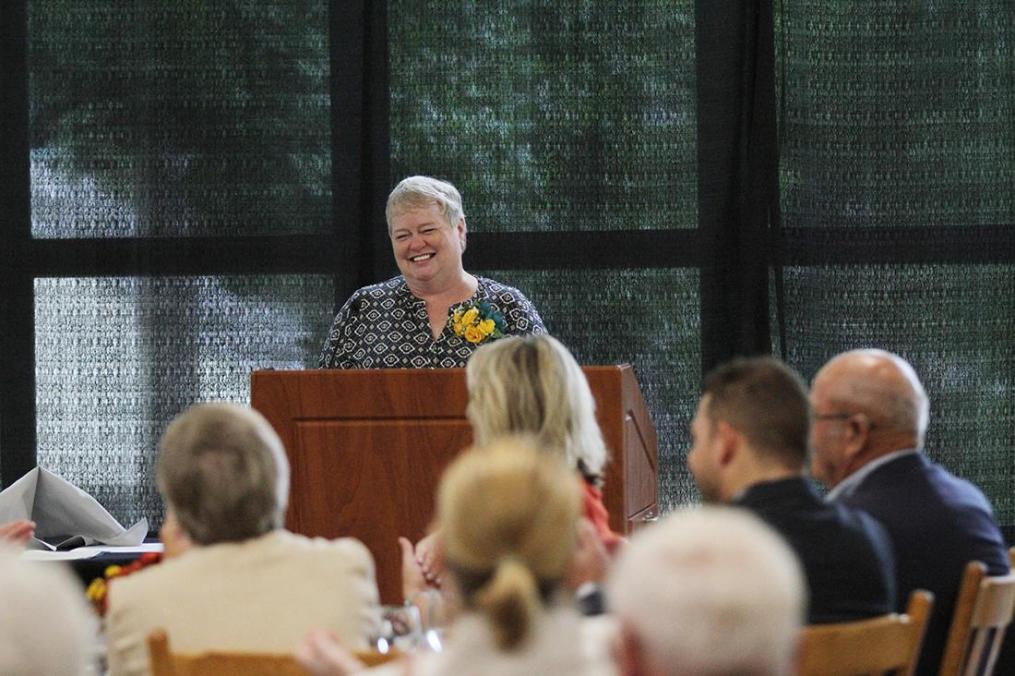 Kathy Waye speaks from the podium during the August 14, 2018 Stork Award Luncheon in the Geiser Dining Commons.

The 2018 Donald and Corinne Stork Award for Community Service was presented to Penn Yan resident Kathy Waye on Tuesday, Aug. 14.

Keuka College established the Stork Award to recognize those individuals who exemplify its historic commitment to the value and benefit of using individual initiative for the common good. The award was named after the first recipients Penn Yan residents Corinne Stork and the late Donald Stork, in 1991.

“The decision to present Kathy with this award was unanimous,” said Corinne Stork, in helping to present the honor before a luncheon crowd of more than 140 at the College’s Geiser Dining Commons. “Kathy has been praised for her leadership, hard work, and her love of Penn Yan. She is thoughtful about remembering others, and it is particularly poignant to me to have her win this award, as Don and I were close friends of Kathy’s parents for years.”

Ms. Waye was recognized for her efforts on behalf of numerous Penn Yan-area organizations including the Penn Yan Rotary Club, the Yates County Chamber of Commerce, Yates Christmas Program Board, Celebrate Service ... Celebrate Yates (CSCY), Keuka Housing Council, and the Tony Collins Foundation, among myriad others.

“It is such an honor to receive an award named after the Storks,” said Ms. Waye, Keuka College’s Director of Community Relations and Events. “I am humbled to be here, and I am lucky to live in this community.”

In addition to the receiving the 27th annual award, Ms. Waye was recognized by state and federal officials for her outstanding community service.State Assemblyman Phil Palmesano sent a citation honoring Kathy for her “personal investment, hard work, and the many hours she’s dedicated to her community.”

“I am proud to know Kathy, and she is so special to this community,” said Neil Simmons, who serves with Ms. Waye on the College’s Community Associates Board, which seeks to connect Keuka College with surrounding communities.“She was my selection for this year’s recipient, as she is a human dynamo. Like Corry, I have been privileged to watch her grow into an influential and popular leader of our community.”