The College teams up with a Monroe County company to aid local ospreys. 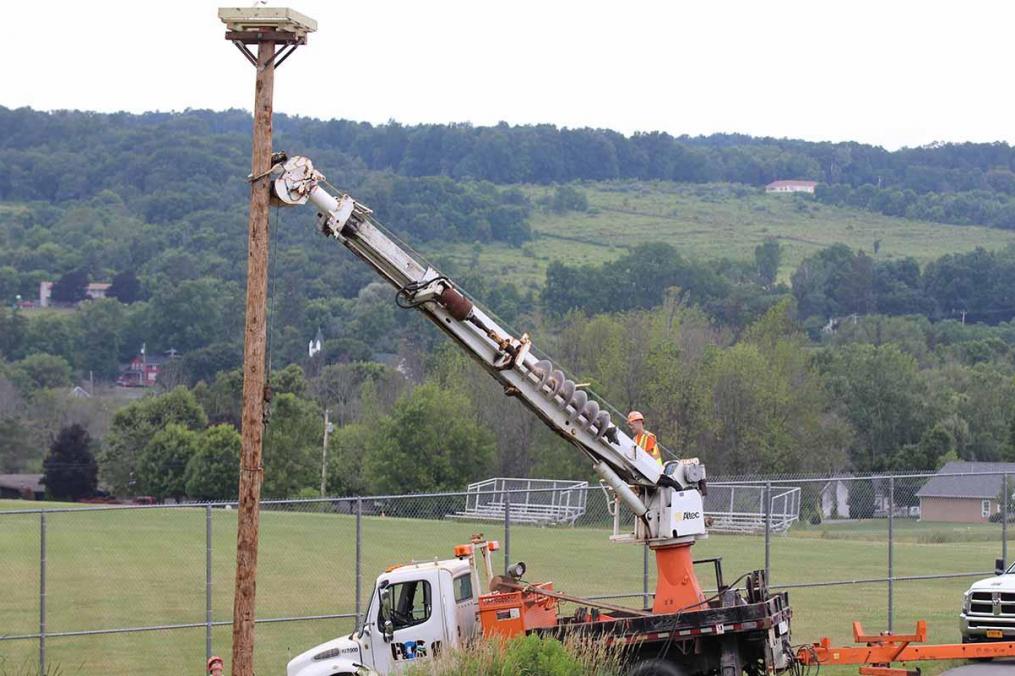 When the Keuka College Soccer and Field Hockey teams open their 2019 home schedules, the Wolves will have some new fans watching from above the turf at the Jephson Community Athletic Complex.

Over the summer, after a number of loose sticks were found at the base of one of the complex’s light towers, it was discovered that a family of ospreys were attempting to nest in the lights.

“It would be both dangerous for the osprey in the lights as well as potentially damaging to the lights,” said Director of Athletics David Sweet.

A solution was found thanks to the generosity of Scottsville-based Power & Construction Group, a utilities and construction company that specializes in the installation of street lighting and electric poles.

“Driving around the Finger Lakes region I have seen a lot of these osprey platforms showing up, so I saw an opportunity for P&CG to help out,” said company representative Steve Losey.

Power & Construction Group built a platform for the osprey to nest and installed it beyond the southwest corner of the turf field to provide a safe place for the birds. The platform is affixed atop a 40-foot pole. The materials and labor for the project were all donated by P&CG, an act that reflects its environmentally conscious corporate philosophy.

Now all fans, birds and humans alike, can watch the Wolves as they open their home schedule on Wednesday, Sept. 4, with a field hockey/men’s soccer doubleheader. The Keuka College Field Hockey team will host Houghton College at 4 p.m. and the Men’s Soccer team will follow at 7 p.m. against the Rochester Institute of Technology.