Never mind sibling rivalry; it was more like sibling harmony as Monica, Alex, and Michael Leljedal all attended the College’s Social Work program. 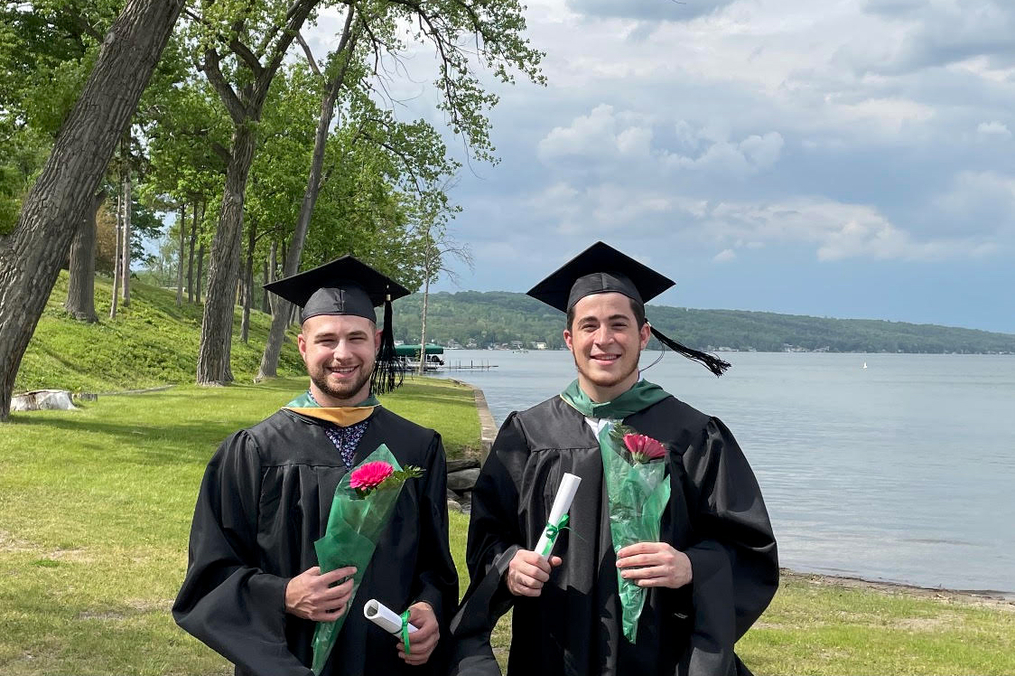 Brothers Alex, left, and Michael Leldedjal pose near Keuka Lake after they graduated with their Master's degrees in May 2021. The brothers were in the same Evening and Online Social Work cohort.

A strong desire to help others runs in the Leljedal family. So does a keen assessment of quality education.

That’s how it turned out that Monica, Alex, and Michael Leljedal not only selected the same career path -- social work -- but the same institution to prepare them: Keuka College.

The Leljedals say the College’s social work programs matched what they were looking for: small class sizes at an affordable college close to their Horseheads, N.Y., home.

In other words, the idea of heading off to college and leaving their siblings behind went right out the window. A social work student, Michael was a junior on campus when Monica was taking classes, and the sibling spillover continued as he and Alex were in the same cohort for their master’s degree. Michael goes so far as to joke that the biggest challenges to college were the pandemic and “going to school with my brother.”

More seriously, he admits, the family ties were beneficial rather than burdensome.

Michael and Alex liked being able to discuss their classes. And Alex -- giving as good as he gets -- says he liked having Michael in his classes “to pick on him and embarrass him. … It just added a bit more fun because I got to annoy my brother at school.” 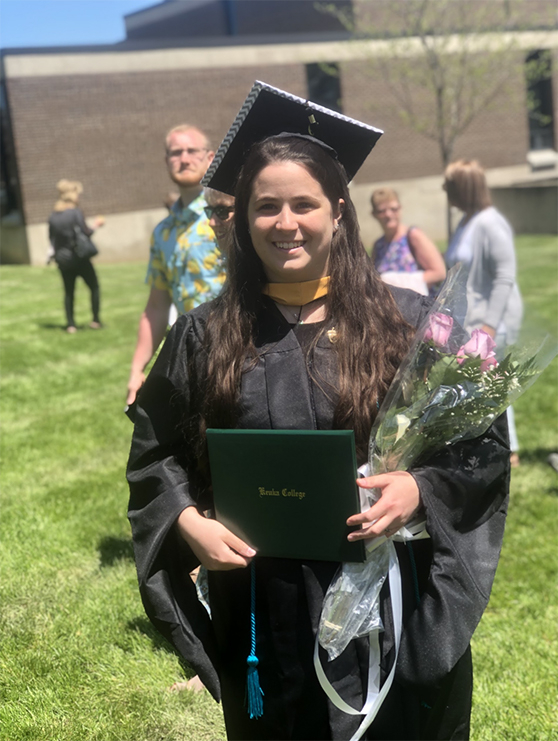 Monica Leldedjal poses with her diploma on the Keuka College campus.

It wasn’t all taunting and teasing; the siblings did their homework before landing in Keuka Park.

“I heard that Keuka College’s social work program was very strong, and I chose it because I wasn’t interested in going to a big school,” says Michael. “It was a perfect fit. I also liked the Field Period® aspect; I don’t think any colleges around the country have the required internship that Keuka College does.”

Monica liked how the College’s field placement program and capstone classes were organized.

“We met weekly and had time to discuss cases, things we were learning, or things we were struggling with. I felt I had the support I needed from my faculty and cohort members,” she says. “My cohort became a family.”

Alex says, for him, the College’s master’s program checked all the boxes.

“When it came time to look at grad school, I looked at Keuka College’s MSW program and compared it to other schools,” he says. “Quite frankly, Keuka College was less expensive, faster, and I had already done my BSW, so it made sense to continue.”

Once classes began, they discovered another benefit: the College’s engaged -- and engaging -- faculty.

Alex has high praise for Adjunct Instructor and Social Work Cohort Advisor Susan Groover-Van Pelt, who was “incredible.” and Michael credits Professor of Social Work Jen Mealy for being supportive.

“She sees your potential and pushes you to it,” says Michael. “She was one of the most influential people in my academic life. She’s incredible.”

Monica, Alex, and Michael credit the College’s professors, classes, and real-world opportunities for preparing them for their careers -- which are off and running: Each began a new job in April.

“What prepared me the most for my job is the teachings and instructions on one-on-one interactions, and building a rapport with clients,” says Alex. “We learned therapy models and techniques, theoretical frameworks, and the focus on individual relationships, which was the biggest preparation for me. Thanks to Keuka College, I learned how to conduct therapy sessions with actual experience in practice.”

While the Leljedal siblings earned their degrees in person, Keuka College also offers its MSW program in a hybrid format. Students attend face-to-face classes close to home in Rochester, Syracuse, or the Finger Lakes, then complete homework, assignments, and other coursework online during the week. Click here to learn more.