A pair of grants from the Interfaith Youth Core will help the College promote diversity, equity, and inclusion. 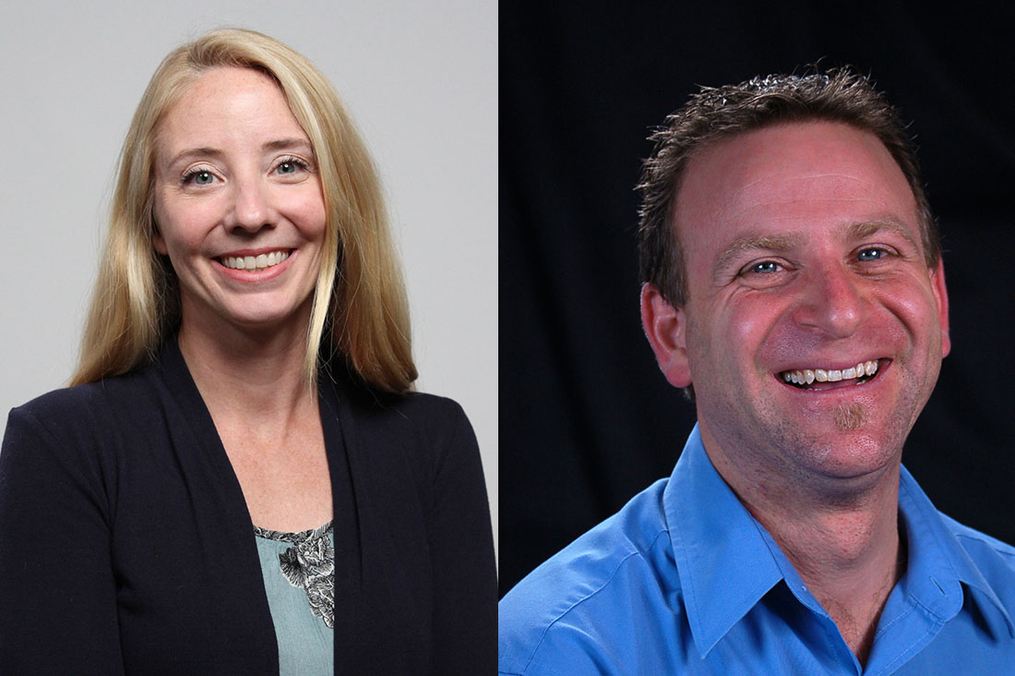 Dr. Malia Spofford Xavier (l) and Chaplain Eric Detar each received a $1,000 grant from the Interfaith Youth Core to develop curriculum at the intersection of racial equity and interfaith cooperation.

Keuka College’s efforts to promote racial equity and inclusion just got a big boost from a national organization.

Associate Professor of Spanish Dr. Malia Spofford-Xavier and College Chaplain Eric Detar have each been awarded $1,000 grants from the Chicago-based Interfaith Youth Core (IFYC). The grants, from IFYC’s Racial Equity & Interfaith Cooperation Award, are part of IFYC’s We Are Each Other’s Campaign, which supports interfaith leaders responding to the current national crises, such as the coronavirus pandemic and the massive uprisings sparked by the death of George Floyd.

The funds will help Dr. Spofford-Xavier and Chaplain Detar strengthen curriculum and training to promote broader consciousness on issues of diversity and inclusiveness – areas they say students are hungry to explore.

“Students are especially eager to discuss religion and race, but can be afraid to reach out,” says Dr. Spofford-Xavier, who says the grant will help her revise the current KC301: Intercultural Studies curriculum, beginning Fall 2021. “A revised Intercultural Studies course could more effectively empower students to fully understand the social justice and civil rights movements and to engage with the community around them.”

Given her students’ interest in discussing race and religion, Dr. Spofford-Xavier says understanding the relationship between racial equity and interfaith cooperation could provide a path towards thinking “more daringly about how people from all backgrounds and beliefs can affirm and further the principles at the heart of racial equality movements.”

“In exploring the inherent interconnectedness of these key aspects of cultural identity—race and religion—I would like to first include the analysis of this intersection in previous movements, such as the Civil Rights movement, and lead into the discussion of contemporary movements such as Black Lives Matter,” says Dr. Spofford-Xavier. “Interfaith cooperation, in itself, is a prime example of effective intercultural communication, and will provide an important model and inspiration to students in this course.”

Chaplain Detar, meanwhile, will focus on developing new training for student leaders, emphasizing the connection between anti-racism and interfaith. He intends to begin by having the students read Robin Diangelo’s White Fragility and IFYC’s founder Eboo Patel’s Out of Many Faiths: Religious Diversity & The American Promise, then using the works to train fellow student leaders.

“We believe this grant will also jumpstart our core competency initiative for our student leaders,” says Chaplain Detar. “Anti-racism work and interfaith cooperation are critical pieces to global citizens of the 21st century and will help our student leaders be the best leaders they can be on this campus.”

Keuka College has been actively engaged with, and supported by the Interfaith Youth Core. IFCY founder Eboo Patel was the College’s Fribolin Fest speaker in 2017 and, since then, IFYC has helped create an interfaith action plan for the College. Students have participated in IFYC’s Interfaith Leadership Institutes, and the College has received two previous grants from the organization.

“We are deeply grateful for your important work as leaders, teachers, and scholars, and in the transformative classroom spaces curated by you and your colleagues,” says Dr. Carolyn Roncolato, director of academic initiatives at IFYC, which awarded the grants. “With this award, you will join a diverse group of faculty dedicated to developing curriculum at the intersection of racial equity and interfaith cooperation.”