Six Professors of the Year – and a surprise guest – provide insights and inspiration at the College’s Spring Star Faculty event. 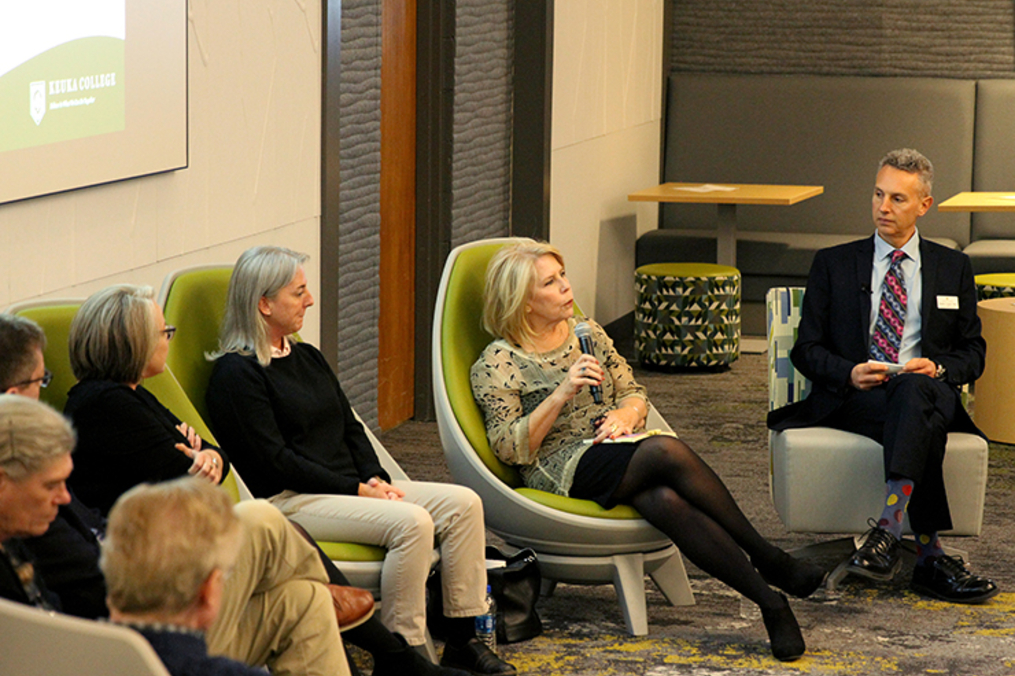 Take risks. Grow where you’re planted. Work hard. Give your academic career time. And be wary of kayaks built for two.

Though they took varying paths to Keuka College and specialize in different academic disciplines, participants in the Spring Star Faculty Panel Thursday in the Hawkins Lounge spoke with one voice about the importance of facing fears and accepting the here and now.

“Grow where you’re planted – I got that advice after being at Keuka College for one year and desperately trying to leave,” recalled Professor of English Dr. Jennie Joiner, chair of the Division of Humanities and Fine Arts. “It was some of the best advice that I got. … I went from California to Georgia to Oregon to Minnesota to Kansas to here but this is where I’ve grown the most. Taking that a step further, it’s here I’ve blossomed.”

Like Dr. Joiner, Professor of History Dr. Chris Leahy did not come to New York by design. In 2005, Hurricane Katrina uprooted his life, his family, and his career.

“I spent the first two years in New York being very angry that my life had been disrupted,” he said. “Like Professor Joiner alluded to earlier, I just had to realize that I had to give Keuka a chance. … I think if I had to convey a message, especially to freshmen, it would be to give Keuka time, give your academic career time.”

Those messages were punctuated by an unexpected participant: Associate Professor of Art Melissa Newcomb, who delivered a videotaped message while holding her four-month-old daughter, Emily. Emily has undergone a series of medical procedures to treat a heart ailment – a journey Professor Newcomb has shared on social media and revisited Thursday.

After summarizing her personal story of facing fears and taking risks in her career, Professor Newcomb spoke of the risks that have been necessary in caring for her daughter, especially pursuing heart surgery. The experience has been emotional but enlightening, she said.

“She is absolutely amazing,” Professor Newcomb said of Emily. “She is so, so brave. I feel so blessed to be her mom. She has taught me to still take risks.

“And I can tell you that Keuka is our family. … This place is very special – unlike any other place. And even if you have doubts, take a chance because you never know where it may lead you.” 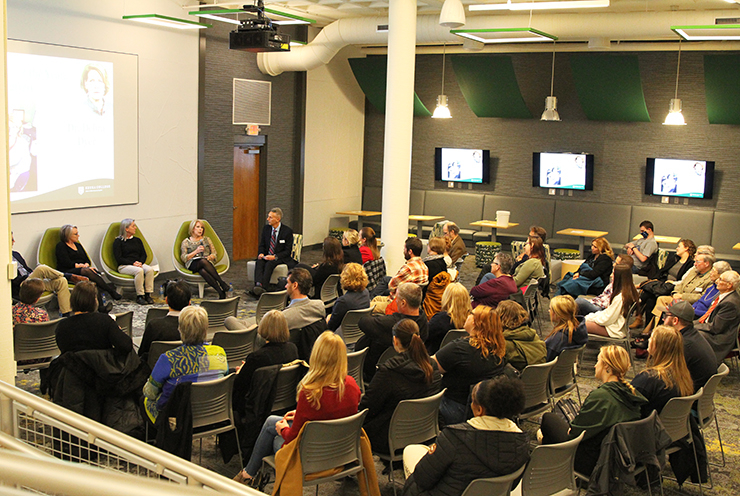 An audience of some 50 students, faculty, staff, and friends attended Thursday's Star Faculty Panel in the Hawkins Lounge.

Professor of Education Dr. Deb Dyer spoke of the skills necessary for academic research and how they are shared with and reflected in her students.

“It takes organization and a strong work ethic to complete a book or an article – any research,” she said. “And I’ve learned that from my students. I see my students work very, very hard. … Work ethic, organization, tenacity; I see my students many times overcome so many obstacles – anxiety, long hours, sleeplessness, pressure – and they soldier on and they become very successful educators.”

Professor of Social Work Jen Mealey ’99 said what she’s learned about herself through teaching is that it’s OK to ask questions and be vulnerable – even among her students.

“From my perspective, working with students every day, it’s important to help them understand that, just because this is my role and that’s your role in this situation, I’m not going to know everything, and they’re going to teach me,” she said. “I really enjoy that aspect or relationship-building with the students.”

Professor Mealy also discussed her role in questioning a since-discontinued College tradition of naming each incoming class after a Native American tribe.

“We weren’t really doing anything (with the tradition) other than using a name of tribes, of a culture, of nations that we weren’t, from my perspective, respecting and acknowledging in a way that I felt we need to,” she recalled. “It took a little bit of time to have that change happen but we just weren’t walking the talk. … That advocacy part of being a social worker is really important.”

Professor of Chemistry Dr. Tom Carroll, who is in his 40th year of teaching at the College, continues to conduct research with colleagues across the country and around the world – work that he says informs his instruction.

He cited a sabbatical he took from the College in the mid-1980s to conduct extensive research with a professor at Oregon State University following his marriage – a “two-year honeymoon in Oregon”:

“I did two solid years of basic research on relatively simple molecular systems – small molecules,” Dr. Carroll recalled. “And when I go into the classroom in Chemistry – in many ways in Physics and other things I teach – we use small molecules as prototypes for everything else.”

How deep does the love of teaching their discipline at Keuka College run? Professor of Mathematics Dr. Catherine Abbott said she couldn’t think of anything she’d rather do.

“I have had a lot of interests other than mathematics but mathematics is probably the strongest and most lasting interest I have,” she said. “I love the challenge of solving problems. And I enjoy teaching my students and passing along the love of mathematics to them.”

Passing along that love is one of the things Dr. Abbott said she most enjoys about teaching at Keuka College.

“I like the fact that there are a lot of personal interactions with students,” she said. “They can drop by, ask questions. I spend a lot of time working with them.”

A few additional tidbits were shared by the panelists, all of whom are past Professors of the Year at the College:

Dr. Carroll rooted for a younger Jen Mealy when she was a standout on the girls’ basketball team in the late 1990s.

Dr. Abbott at one time took classes alongside her father, who returned to college later in life to earn his bachelor’s degree.

Dr. Leahy and his wife enjoy kayaking in the Hudson River – in separate kayaks. “We had a kayak that fits two,” he explained. “My wife nicknamed it ‘The Divorce Inducer.’ So we sold that thing pretty quickly.”

The Faculty Star Panel was sponsored by the College’s Professional Standards Committee and moderated by Vice President for Academic Affairs and Provost Dr. Brad Fuster.

“I think we should be doing more of these types of things at the College,” Dr. Fuster said at the evening’s conclusion. “It’s always really a wonderful opportunity to shine a spotlight on our amazing faculty.”