The environmental science major helped improve the lives of people in Thailand. 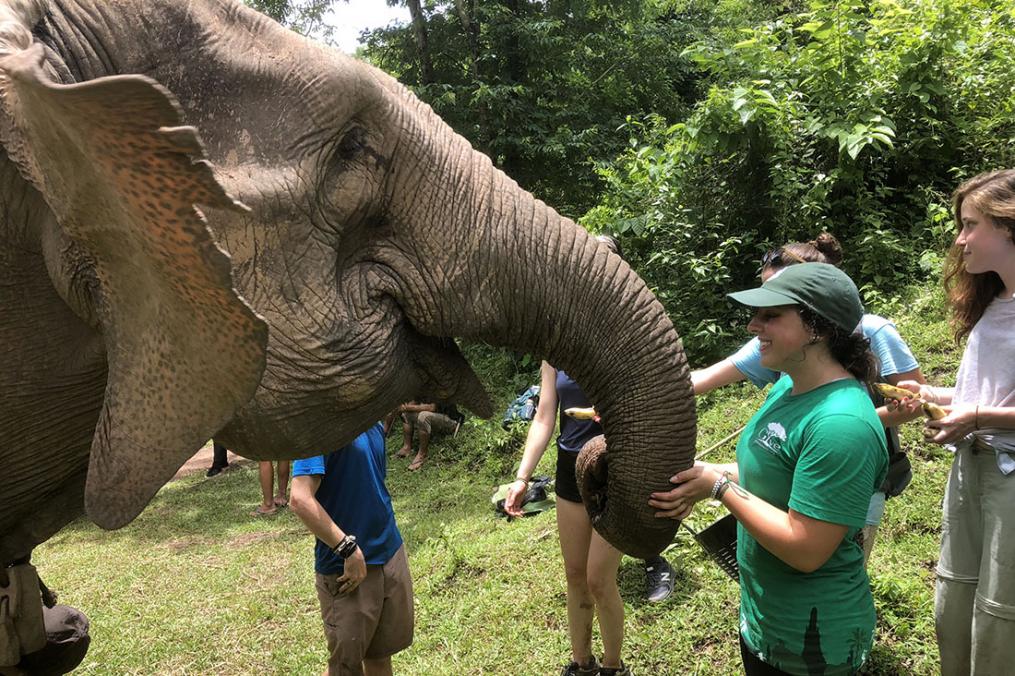 After hearing about a Field Period® opportunity to travel to Thailand with Growth International Volunteer Excursions (GIVE), Sarah Honan ’21 put down a deposit.

“I had never heard of the program before, but it was exactly what I wanted to do,” says Sarah, an environmental science major from Rochester.

Sarah had never traveled by herself before, and never internationally, but she says she wasn’t nervous.

“I like to think that it was because I was on my way to a place where I was meant to be, and doing what I was meant to do,” says Sarah, who spent two weeks over the summer in the southeast Asian country. “Thailand seemed like the perfect fit, and I was excited to take part in sustainable agriculture projects and was even more stoked to be around wild elephants.”

Going into this trip, Sarah expected to learn about the hardships and poverty of the Thai people.

“I soon learned what an ignorant first-world assumption that was,” says Sarah. “Once I got past the materialistic, privileged ‘hardships,’ I began to really become immersed in the Thai culture, and immersed in myself. What these people may lack in wealth and capital, they make up for in simplicity, resourcefulness, and pure ingenuity.”

Immersing herself meant she learned a lot about herself from this trip.

“Primarily, I learned that when you are doing what you love, there is nothing that can stop you, not even fear,” says Sarah “I went on a total of seven flights by myself, traveled internationally for the first time, explored a pitch-black cave, hiked in the middle of a jungle, and bungee jumped 150 feet, all without a single ounce of fear.”

She also learned to become comfortable with being uncomfortable.

“The fact was, I wasn’t going to stop sweating, the weather wasn’t going to get less abrasive, and the work we did day in and day out was not going to get easier,” she says. “I had to learn that some days, a swim in the river would have to do for a shower, and I learned to really respect rice, as that’s primarily what we ate every day.”

She also realized she could do a lot on her own.

“This was an important aspect for me, and I felt like I had finally found myself again after months of not being myself,” says Sarah. “I also discovered that I have a deep passion for people, something that I definitely did not think I had. I have always been a lover of animals and nature, and knew I wanted a career in wildlife biology and environmental science—a career that would allow me to be independent and avoid people.”

However, the Thai people she met made a permanent impression on her heart. They taught her lessons about the purity of kindness, self-empowerment, the power of a smile, how to be successful, and having a spark for adventure.

“I fell in love with wholesome, pure people,” Sarah says. “Learning skills such as weaving, bamboo rafting, and cooking was such a cool, hands-on experience that really connected the volunteers to the residents. This trip made me kinder, more open to others’ opinions, more versatile in my career, and more appreciative of my life and the privilege that I have been blessed with.”

While working with the Thai people was a primary reason for the trip, Sarah and the other GIVE volunteers were able to spend time with elephants.

“My favorite part of the trip was definitely hiking for elephants and getting to interact with them,” says Sarah. “One of the days we had to hike seven miles up mountains to find the elephants, and it was such a rewarding feeling when we finally found them. Feeding them and washing them in the river was such a surreal experience, and I am so lucky to have gotten to interact with such beautiful creatures.”

Prior to this trip, Sarah says, she always thought that saying she wanted to change the world was “cheesy, or impossible.”

“But that was before I realized I wasn’t alone,” says Sarah. “When you have other people saying the very same thing, it becomes a lot more possible. And learning that hundreds of other people had the same views as I did was so empowering.”

Sarah says you can never fully understand something until you experience it firsthand.

“Read all the books and media you want, but I promise you nothing compares to being barefoot, knee deep in a muddy rice paddy with a bunch of strangers who have somehow become your new family,” she says.

“There is not a single thing I would change about this trip, and I fully intend on going back one day to see the progress made by the volunteers who come after me,” Sarah adds. “If you have the opportunity to travel, why not make a change while doing it? And who knows—maybe it will change something deep inside you.”

“Sarah is a warm, compassionate, and thoughtful student and this experience provided her with opportunities for life-changing experiences and introspection that she took full advantage of,” says Dr. Brown. “I could not be more pleased with the outcome for her.”

To learn more about Sarah’s experiences in Thailand, watch the video she made documenting her trip. 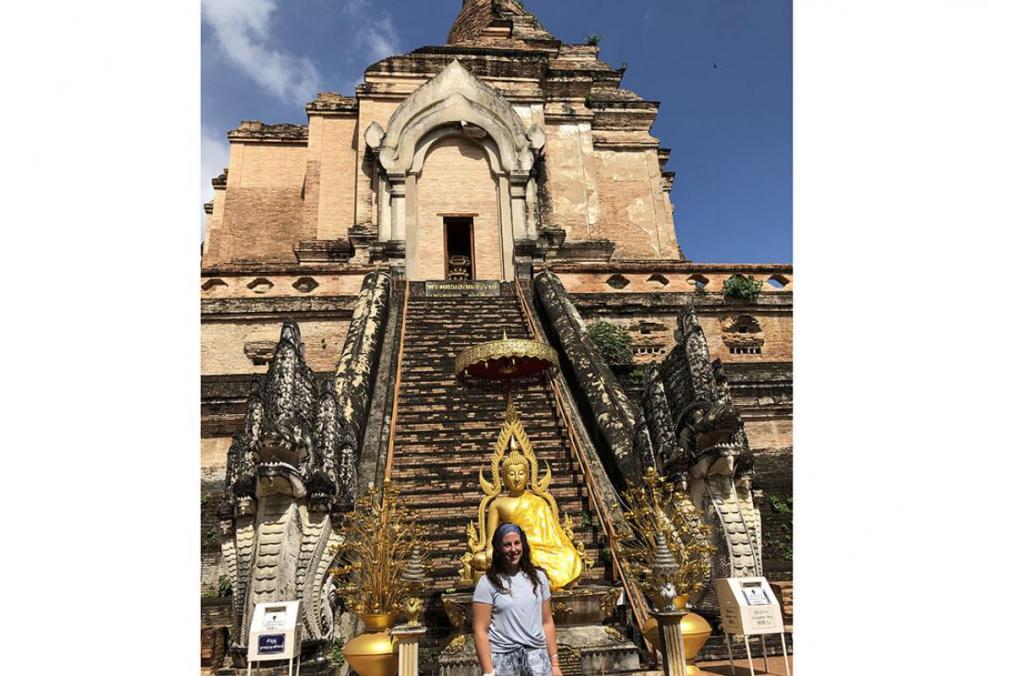 Sarah Honan '21 completed a summer Field Period® with Growth International Volunteer Excursions in Thailand. Here, she stands in front of the Wat Chedi Luang Buddhist Temple in the city of Chiang Mai, Thailand. 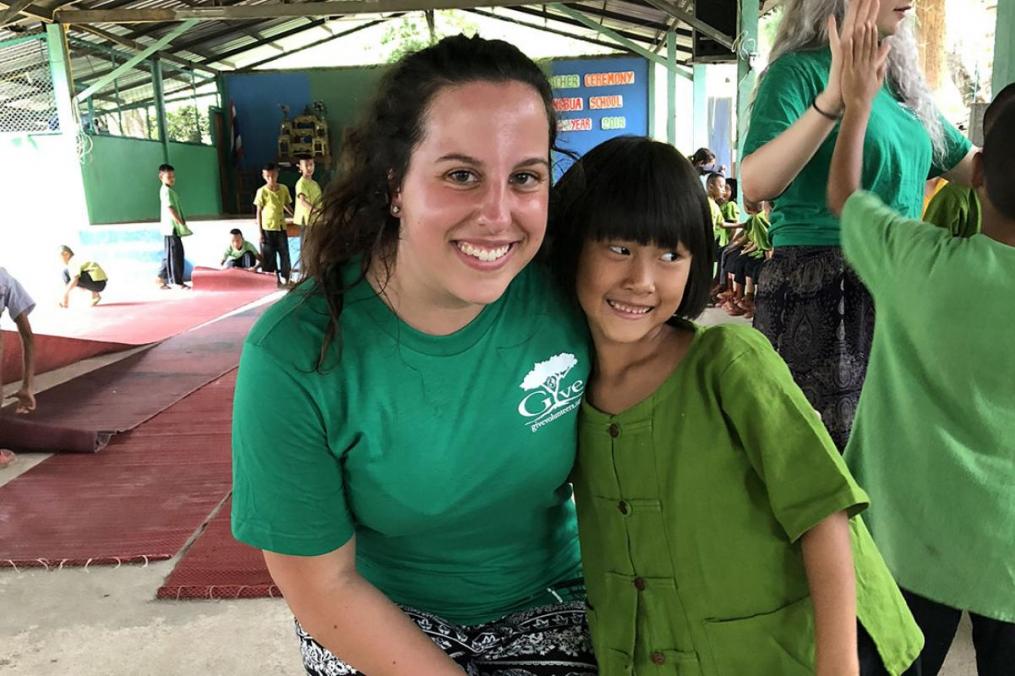 Sarah Honan '21 and one of the children she met during her summer Field Period® to Thailand. 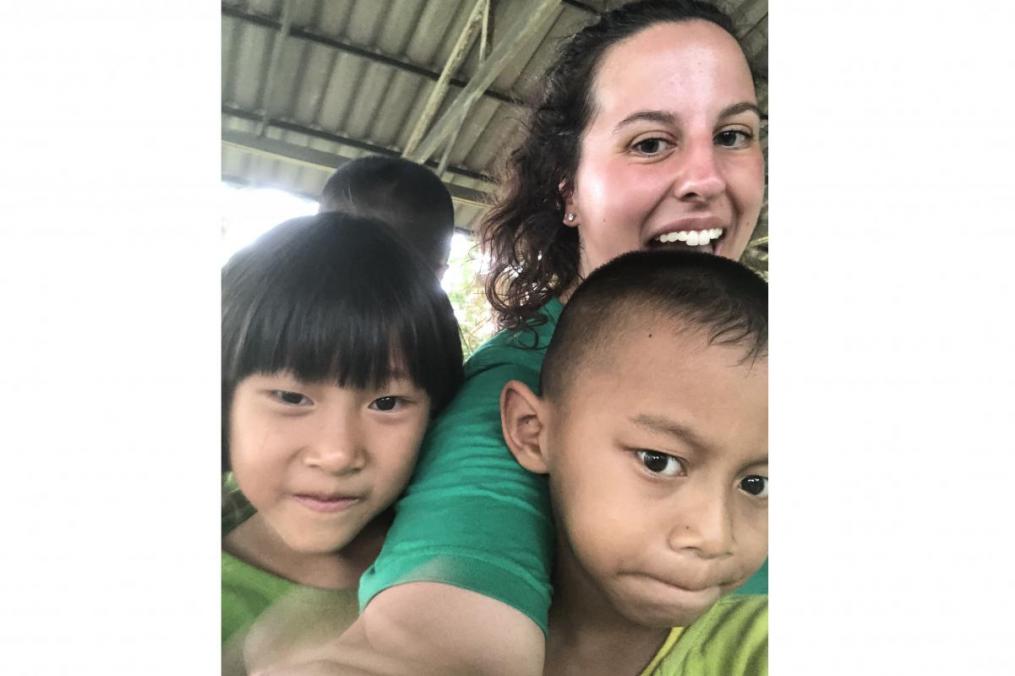 Sarah Honan '21 takes a selfie with some of the children she met during her summer Field Period® to Thailand. 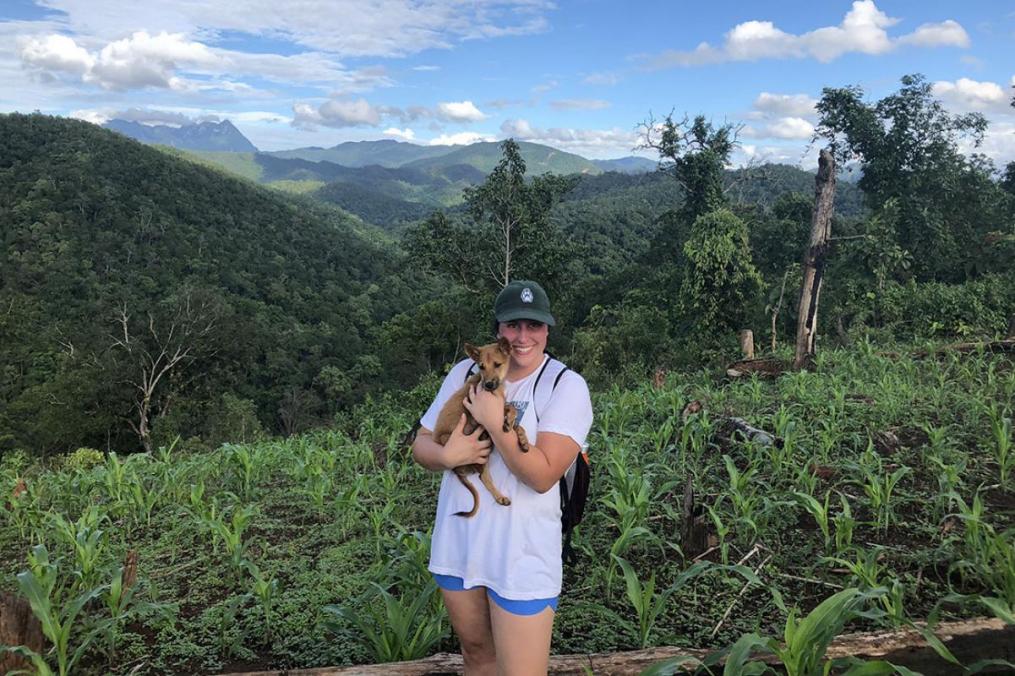 Sarah Honan '21 with one of the village residents of Chiang Mai during her summer Field Period® to Thailand. 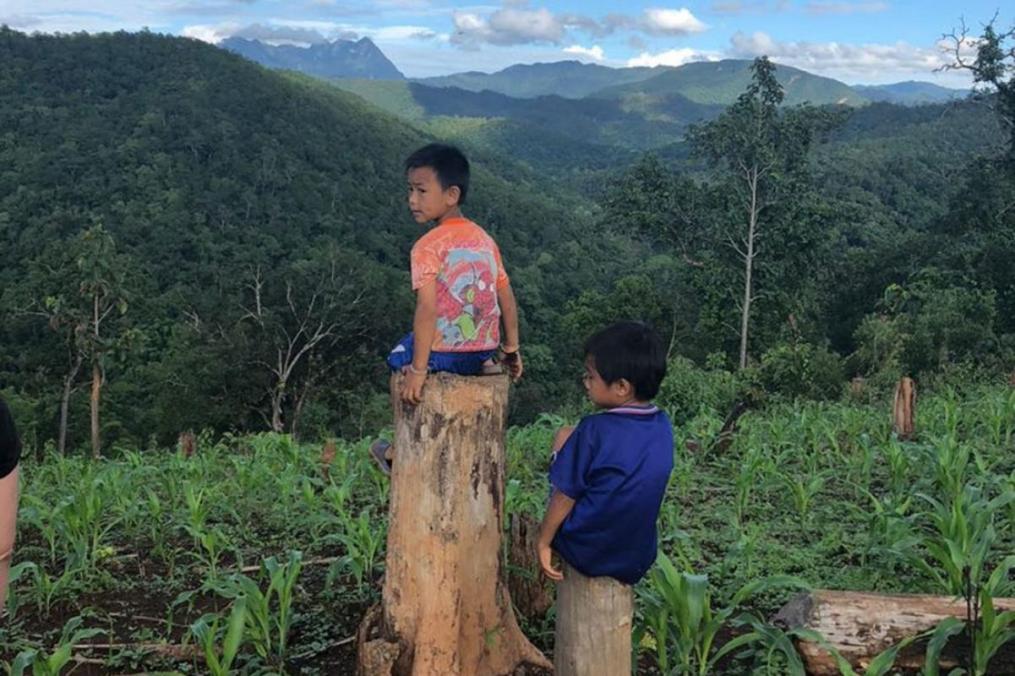 Sarah Honan' '21 made friends with the children of the village of Chiang Mai during her summer Field Period® to Thailand. 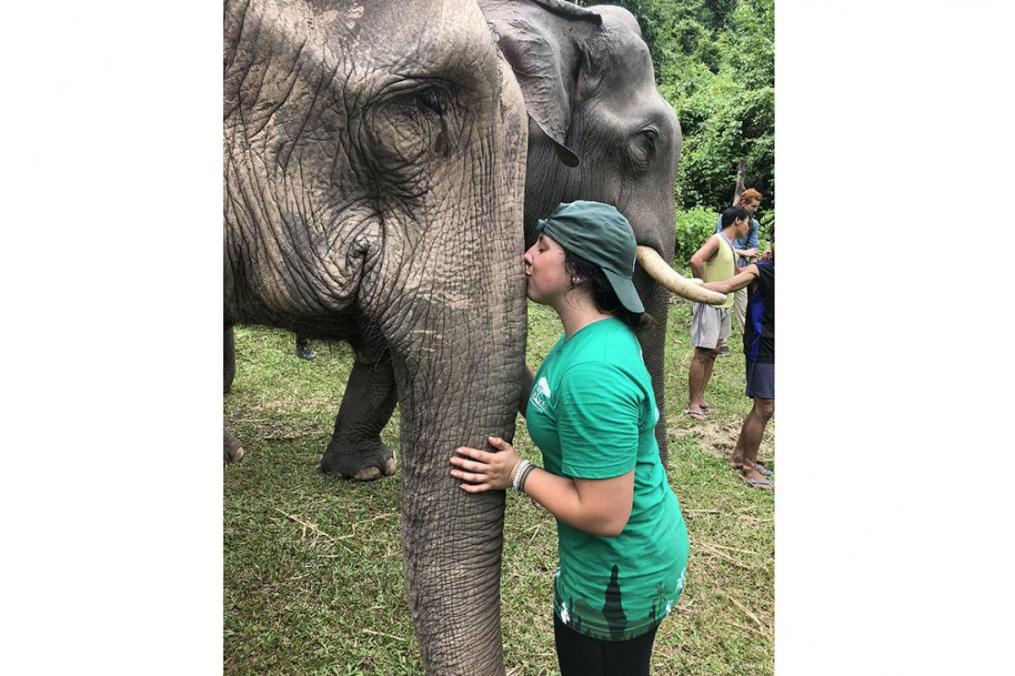 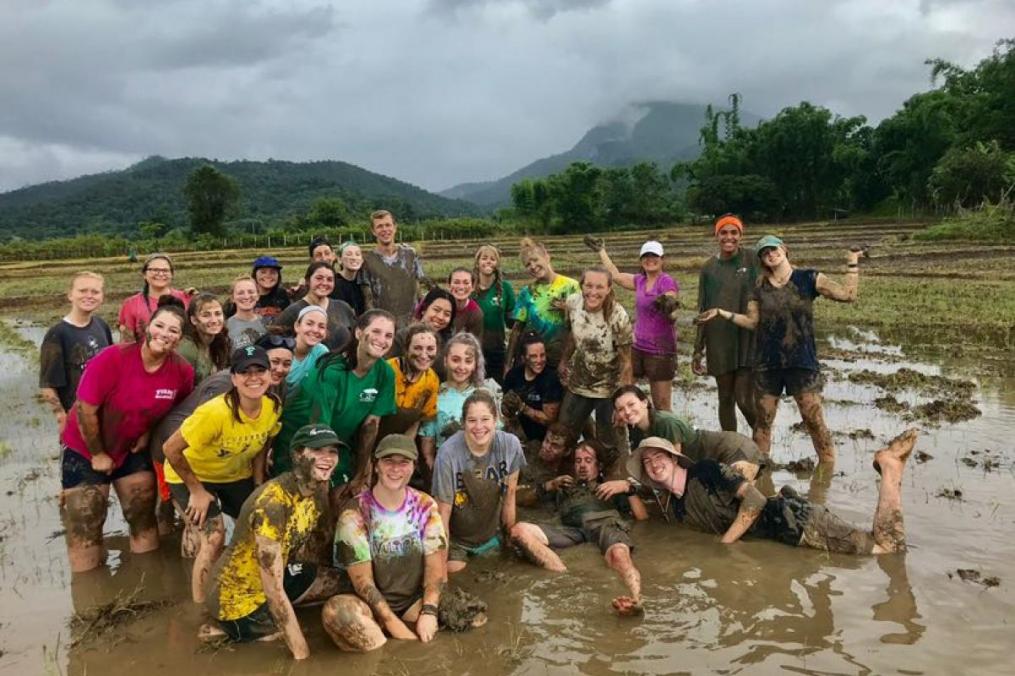 Sarah Honan '21 completed a summer Field Period® in Thailand. Here, she poses with members of her Growth International Volunteer Excursions crew. "Nothing compares to being barefoot, knee deep in a muddy rice paddy!" 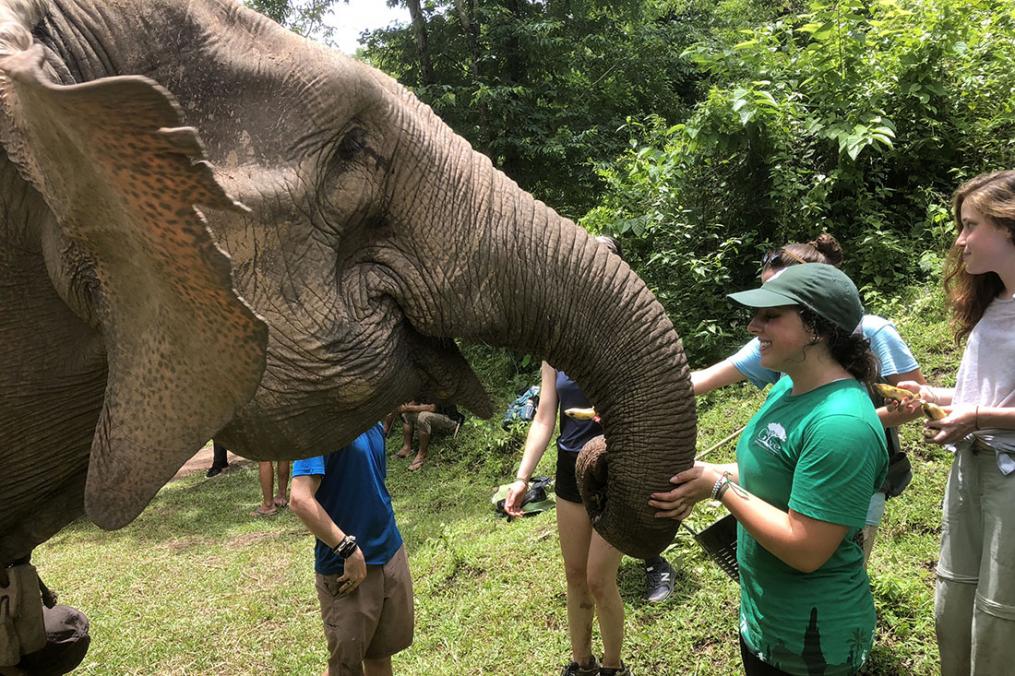 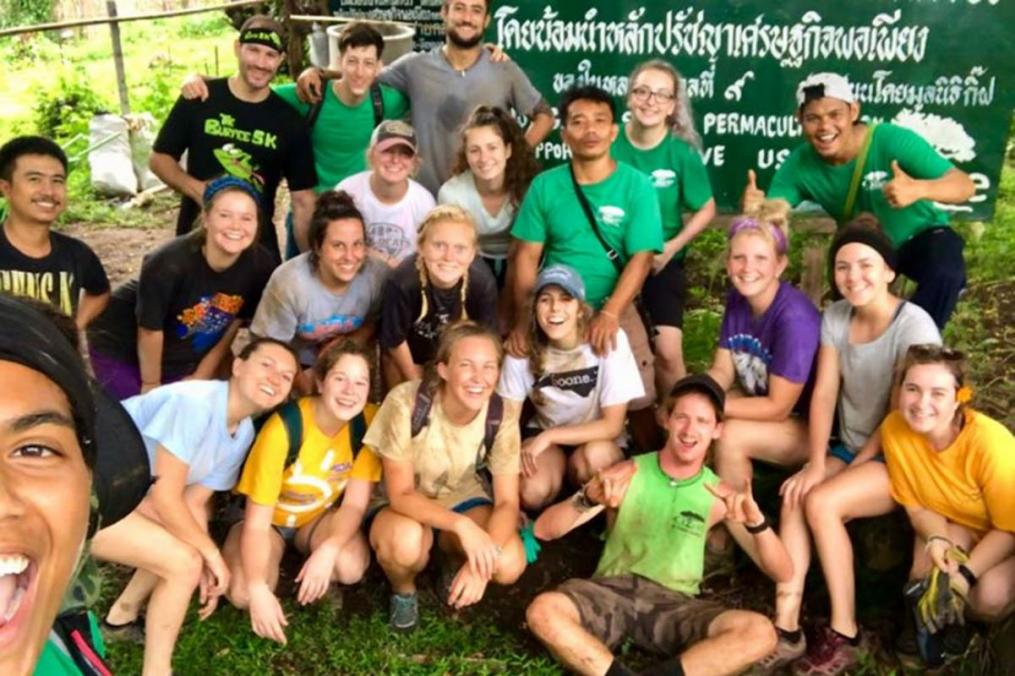 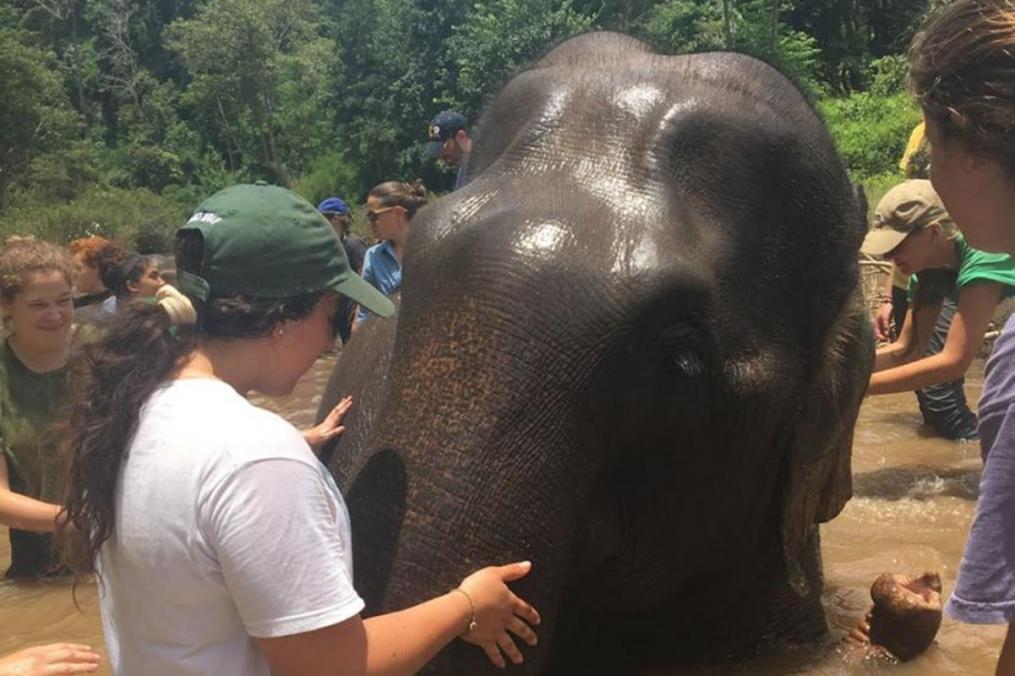 Want to Learn More about Our Field Period® and Environmental Science Degrees?