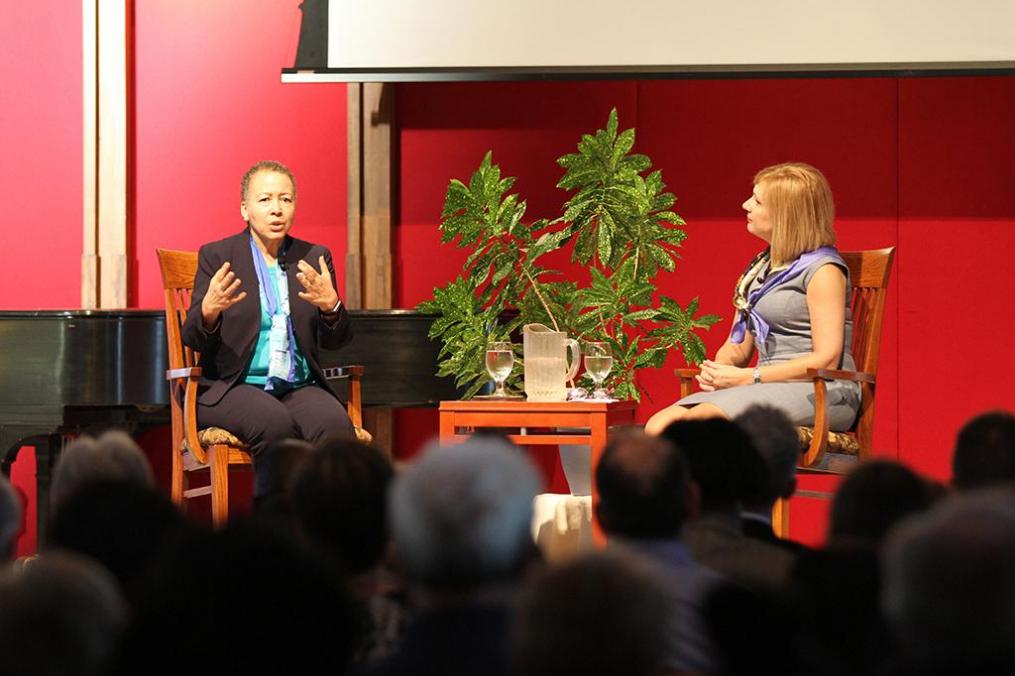 Conversations surrounding issues of race are neither easy nor comfortable – but they will be necessary on campus if Keuka College and similar institutions are to thrive in an increasingly diverse society.

That was the message delivered by Dr. Beverly Daniel Tatum to a packed Norton Chapel on Monday, May 6, during Keuka College’s 31st annual Carl and Fanny Fribolin Lecture.

The lecture, which was held in a fireside chat format facilitated by Interim College President Amy Storey, capped Fribolin Fest – a day of on-campus events and activities dedicated to focusing on diversity and social justice.

Dr. Tatum, a clinical psychologist and the author of “Can We Talk about Race? And Other Conversations in an Era of School Resegregation” and “Why Are All the Black Kids Sitting Together in the Cafeteria?” said cultivating a climate of inclusivity is not a challenge unique to the Finger Lakes.

“I find that on almost every campus there are certain things that are common,” she said. “One of those things is discomfort in talking about race.”

That discomfort is instilled at a young age, she said, and reinforced by societal boundaries both geographical and institutional.

“On May 17, we’ll mark the 65th anniversary of Brown vs. the Board of Education,” Dr. Tatum reminded the audience, citing the groundbreaking 1954 Supreme Court decision that overturned the concept of separate but equal institutions. “Sixty-five years, and schools are almost as segregated today as they were then. … Even though our society is much more diverse, a lot of young people come to college without having had the opportunity of going to school with students different from themselves.”

Particularly for majority white populations, Dr. Tatum said, the vacuum formed by lack of meaningful interaction is filled with misinformation and stereotypes – what she referred to as “smog.”

“(We’re) growing up around images and messages that reinforce those stereotypes,” she said. “It’s like smog in the air. If you breathe it in, you’re likely to breathe it out.”

Strategies for equity and inclusiveness, Dr. Tatum said, include ensuring that all students see themselves in everyday campus life and cultivating cultural competency through shared experiences such as community service projects.

“But not just experiences,” she added. “Experience and then reflecting on that experience.”

Dr. Tatum also addressed the challenge of sharing messages about inclusivity and cultural competency beyond receptive audiences – of not just “preaching to the choir.”

“What I like to say is, ‘The choir needs rehearsal,’” she responded. “If I’m singing well, other people will want to sing with me. … Some people are never going to join. That’s OK. If there are enough people singing, you can drown them out.”

The 90-minute conversation concluded with the College conferring upon Dr. Tatum an honorary Doctor of Humane Letters degree. President Storey was assisted by Interim Provost and Vice President for Academic Affairs Dr. Brad Fuster and Board of Trustees Vice Chair Aqua Porter in bestowing the honor.

Dr. Tatum is president emerita of Spelman College in Atlanta, and has served as a professor, advisor, and administrator at institutions including the University of California at Santa Barbara, Westfield State College, and Mount Holyoke College.

The Carl and Fanny Fribolin lecture series was established by and is named after the late Carl Fribolin and his wife, Fanny. Carl Fribolin was an emeritus member of the College’s Board of Trustees and recipient of an honorary Doctor of Humane Letters degree in 2004.

The discussion highlighted a day of related activities that included Fribolin Fest events during the afternoon on the lawn outside Norton Chapel, separate Q&A sessions with Dr. Tatum for both students and faculty/staff, and a post-lecture reception in the Geiser Dining Commons.