Rochester Mayor Lovely A. Warren tells graduates, “You are not allowed to sit on the sidelines.” 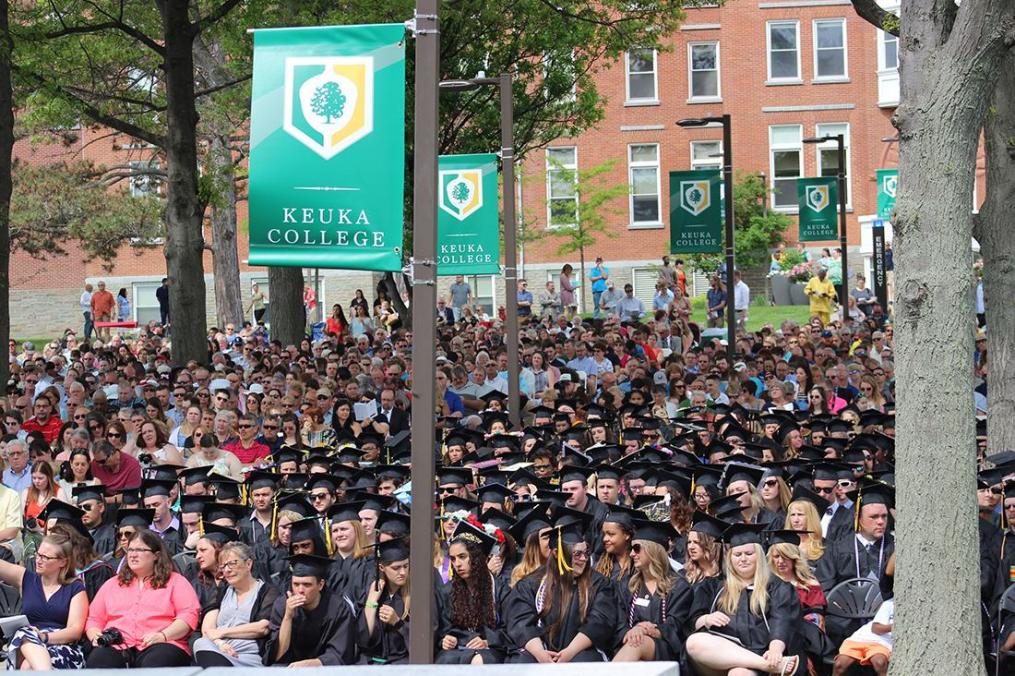 Rochester Mayor Lovely A. Warren encouraged the more than 450 graduates of the Keuka College Class of 2018 to raise their voices for positive change both in the streets and at the ballot box during the College’s 110th Commencement on Saturday.

“Graduates of 2018,” Mayor Warren continued, “you must realize that your duty in this country is not simply to get a good education. But it is your moral obligation to vote. You are not allowed to sit on the sidelines.”

Rochester’s first female mayor also noted that, among the hundreds of family and friends in attendance, was one of her former elementary school teachers at Holy Family in Rochester, Keuka College alumnae Suzanne Parker Murray ’60, who was celebrating the graduation of her grandson Ryan Murray ’18.

“Who knew more than 20 years ago that we would be here this day,” said Mayor Warren. “That Miss Murray, who had graduated from this prestigious institution – a woman who did so much to help students at Holy Family become their best selves and excel  ­– would be sitting here watching her former student give a commencement speech at her grandson’s graduation. …

“There are many lessons to be learned in that story,” she continued. “But the one I want you to remember most is that you never know where life may lead you, when you will cross paths again. So be kind to everyone you meet. As you enter into the workplace, be kind to your coworkers, your boss, the cleaning lady … Be kind because we only have one world, and we must live in it together. There’s nowhere else for any of us to go, people of all races, all colors, all religions, all genders.”

Upon the completion of her address, Mayor Warren was presented with an honorary Doctor of Humane Letters degree by College President Dr. Jorge L. Díaz-Herrera.

Dr. Díaz-Herrera likewise challenged graduates to make a difference in the world.

“Use your Keuka College degree and the knowledge, experience, and talents you worked so hard to secure to be an exemplary citizen and leader, and to serve your communities, your families, our nation, and the world,” he said.

A delegation from Vietnam National University (VNU) in Hanoi, Vietnam, was in attendance this year. The university is one of three partner schools with Keuka College in Vietnam. VNU’s president, Associate Professor Dr. Nguyen Kim Son, spoke to the graduates, congratulating them on overcoming challenges and earning their degrees.

“Today is the beginning of a new adventure and open a new door,” said Dr. Nguyen. “There is a Vietnamese saying that, ‘Everything always begins with difficulties.’ There are certainly many difficulties and challenges you may face on your way toward success. However, they are factors leading to your further growth.”

- An Award of Higher Education was presented to Ashley Ingandello, Rachel Phillips, and Daniel Scott, three students from the DRIVE (Diversity, Respect, Inclusion, Vision and Experiential Learning) program. DRIVE is a collaboration of the Dundee Central School District, the ARC of Yates, and Keuka College. In the program, College students serve as peer mentors to young adults with intellectual disabilities as they assimilate into the College environment and explore their personal goals.

- Dr. Jennie Joiner, chair of the Division of Humanities and Fine Arts and associate professor of English, was named Professor of the Year. Dr. Joiner was praised for bringing enthusiasm, passion, and knowledge into the classroom, as well as for her tireless work on numerous College committees.

- Kathleen M. McDonnell, adjunct professor of criminal justice systems and administration for the Center for Professional Studies, was named Adjunct Instructor of the Year.

- Karen Mann, director of conference services, was named Staff Member of the Year.

- An honorary Doctor of Humane Letters degree was presented to longtime Keuka College Board of Trustees member Robert Taisey.

- Remarks were given by student representatives Emily Bower ’18 and Guy Tosti ’18. 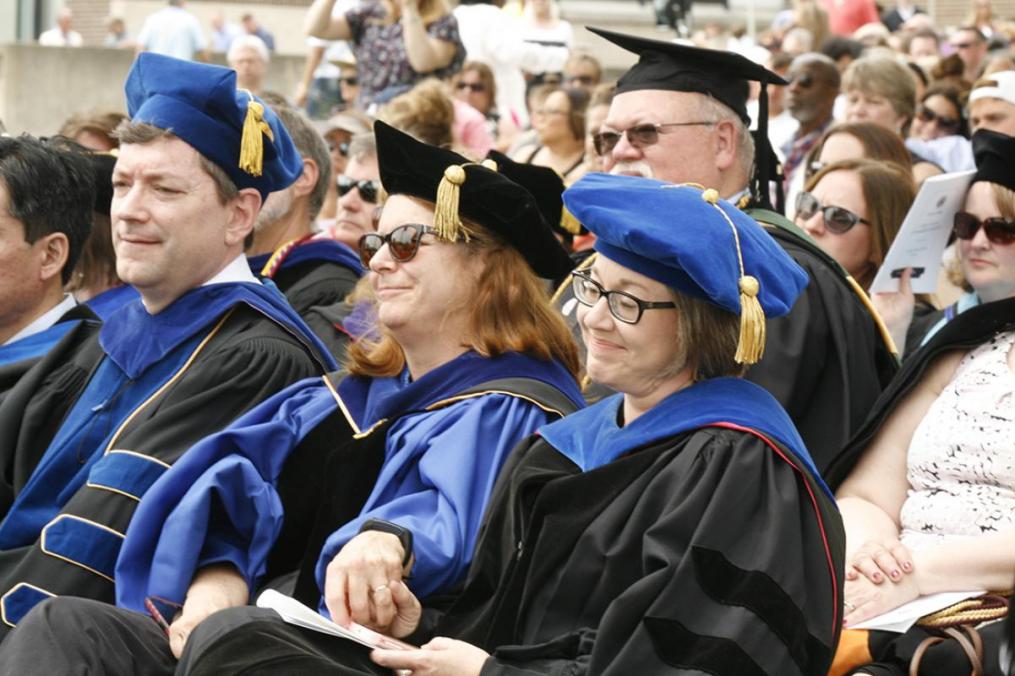 Dr. Jennie Joiner, right, chair of the Division of Humanities and Fine Arts and associate professor of English, gets a reassuring squeeze of the hand from colleague Anne Weed as it becomes apparent she is being named Professor of the Year. Kathleen M. McDonnell, adjunct professor of criminal justice systems and administration for the Center for Professional Studies, was named Adjunct Instructor of the Year. 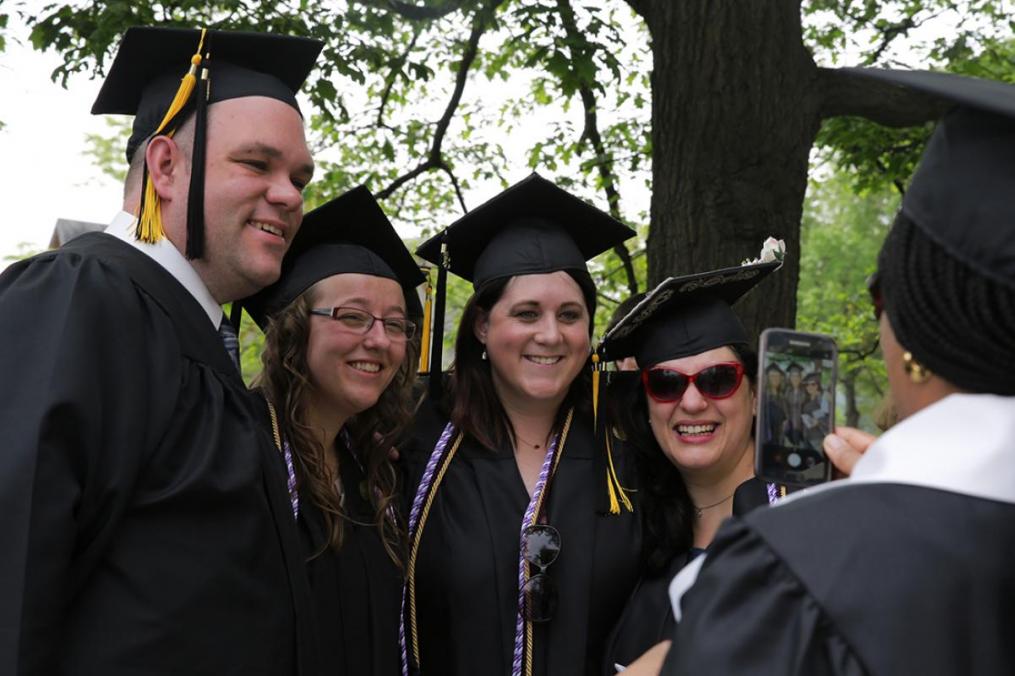 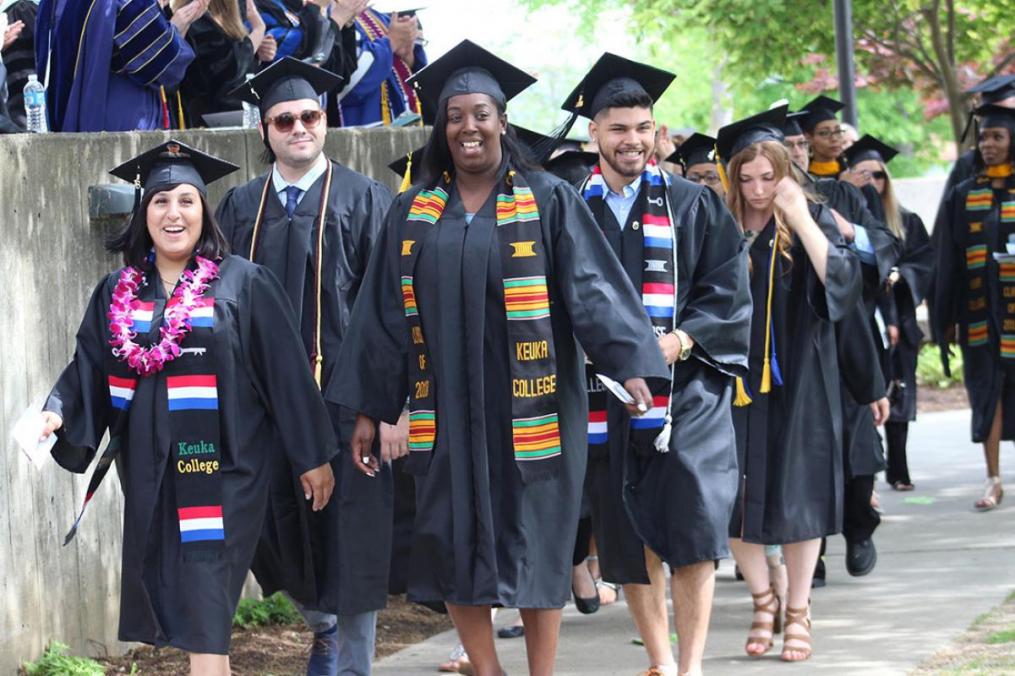 Happy graduates were not hard to find at Keuka College's 110th Commencement on Saturday, May 26. 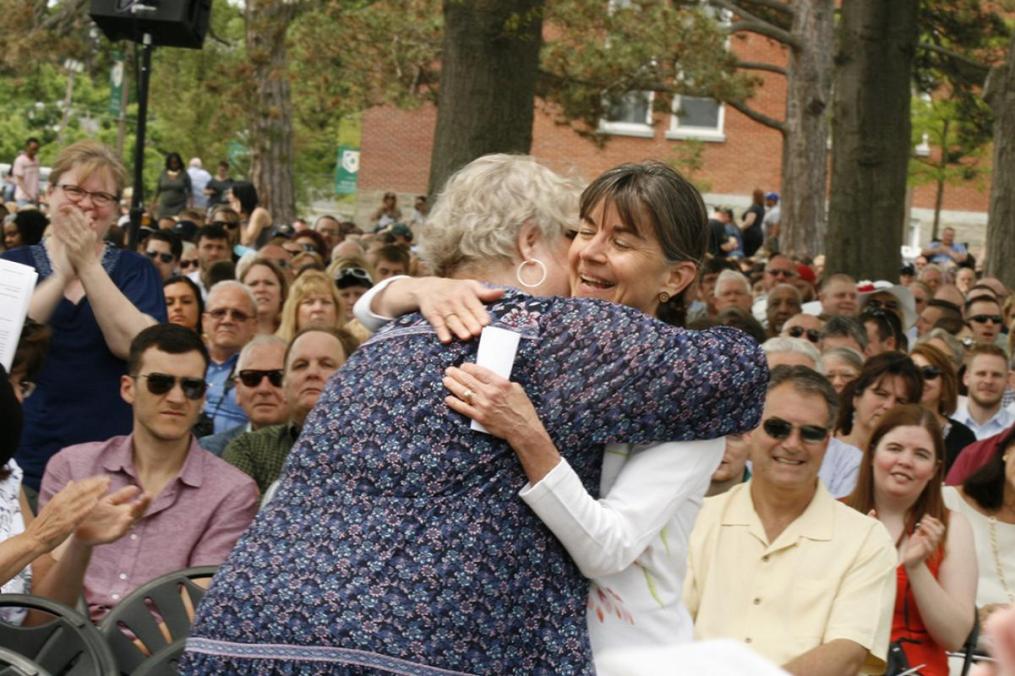 Karen Mann, right, director of conference services, gets a hug from colleague Kathy Waye after being named Staff Member of the Year. 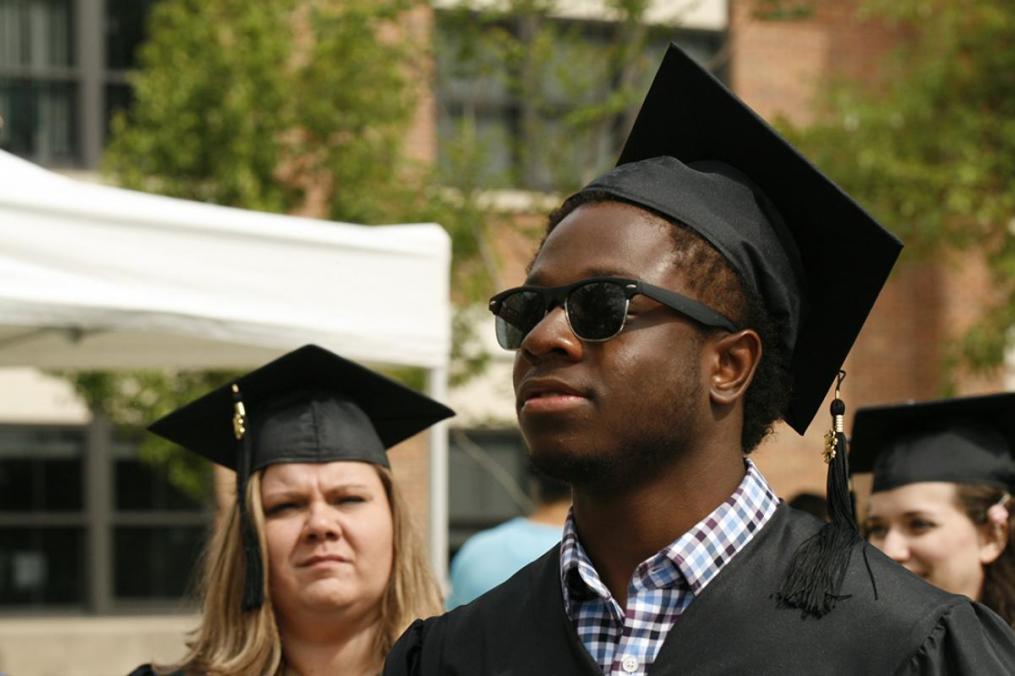 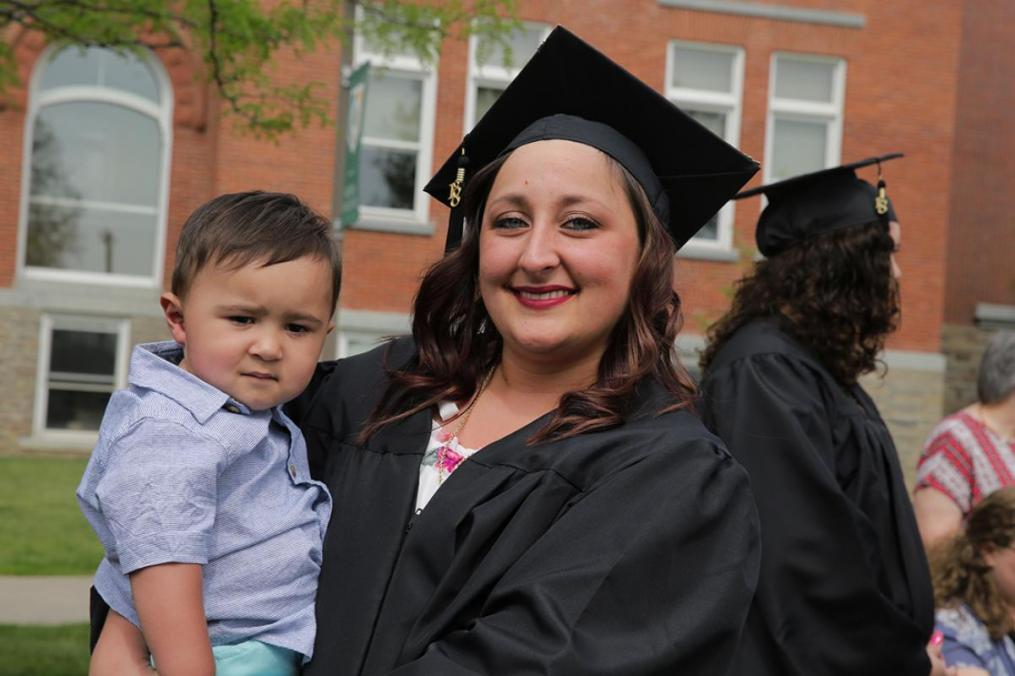 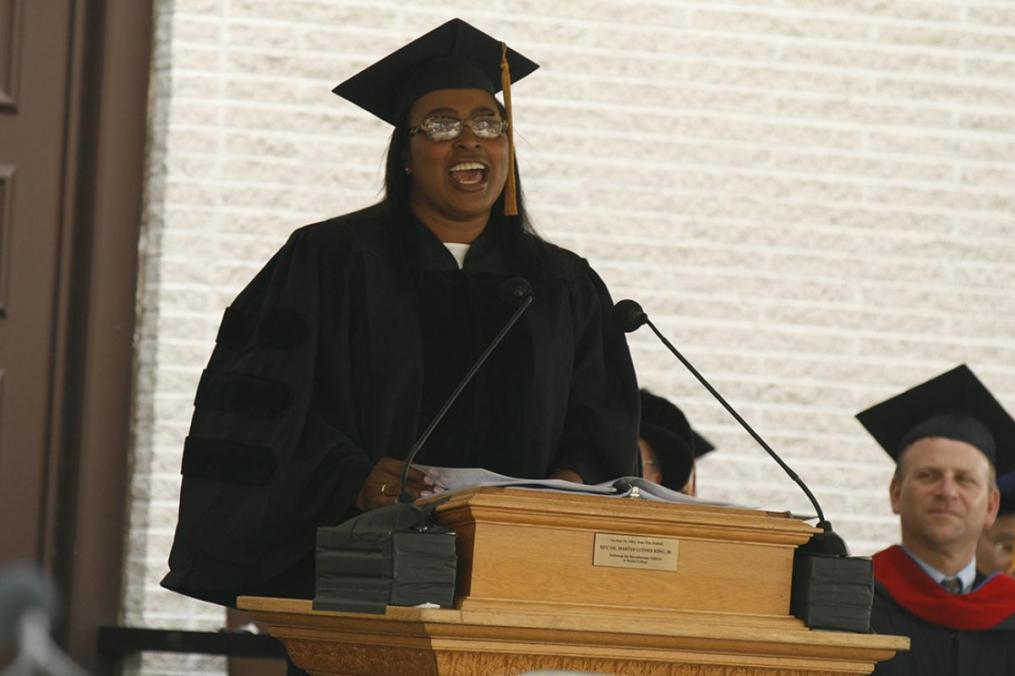 Rochester Mayor Lovely A. Warren delivered the commencement address at the College’s 110th Commencement on Saturday, May 26. 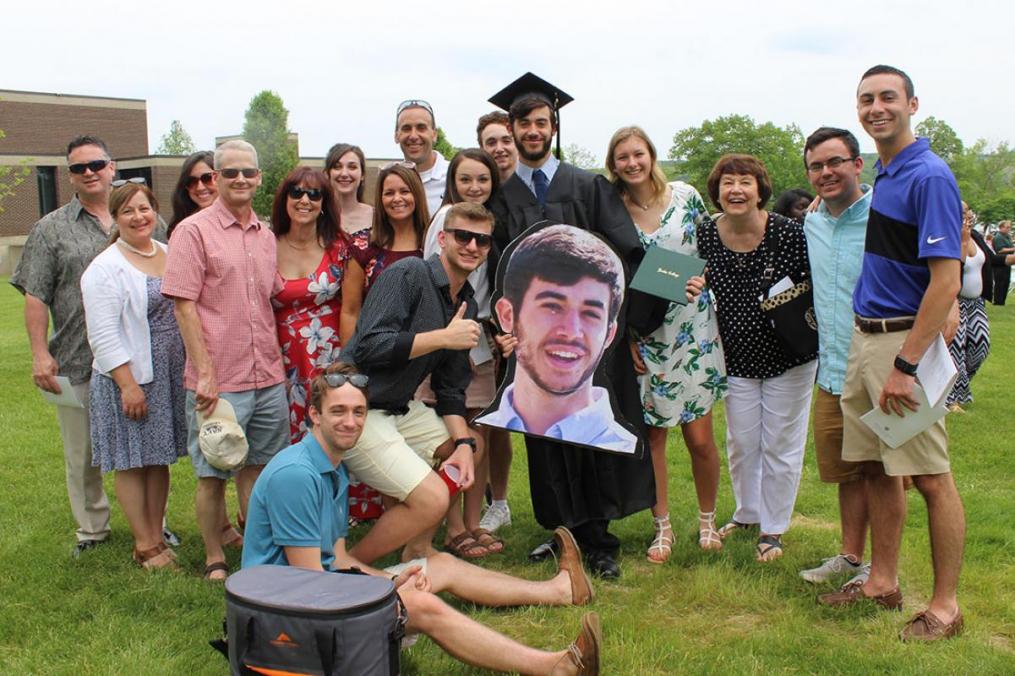 Sociology major Oliesha Jackson usually uses a wheelchair but – to sustained applause – she walked across the stage to accept her diploma at Keuka College's 110th Commencement. 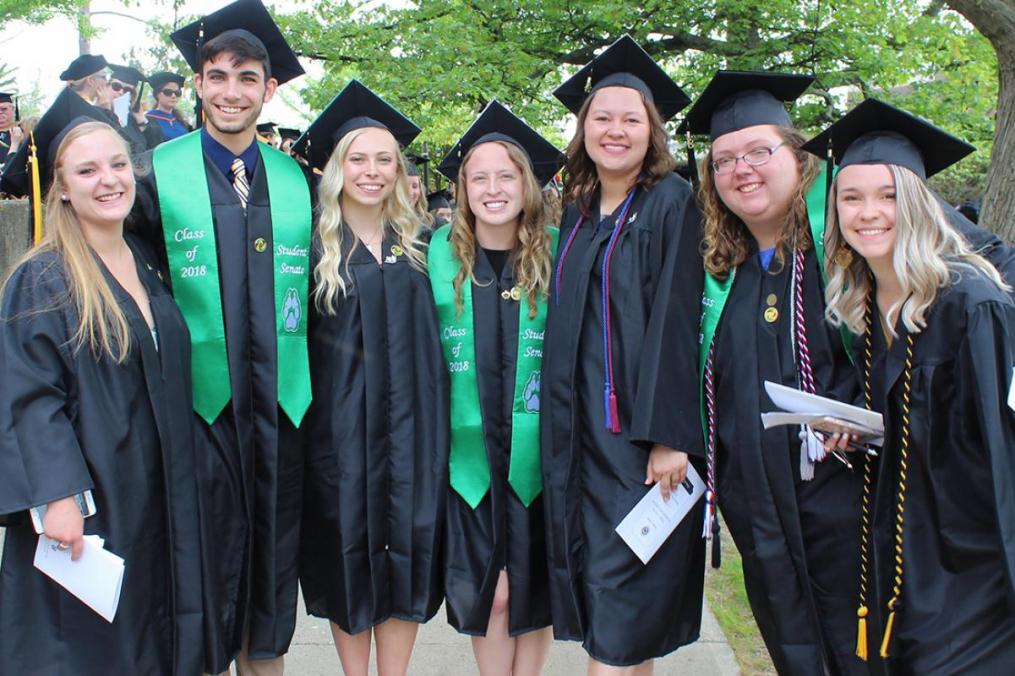 The Student Senate gathers one last time prior to Commencement ceremonies. 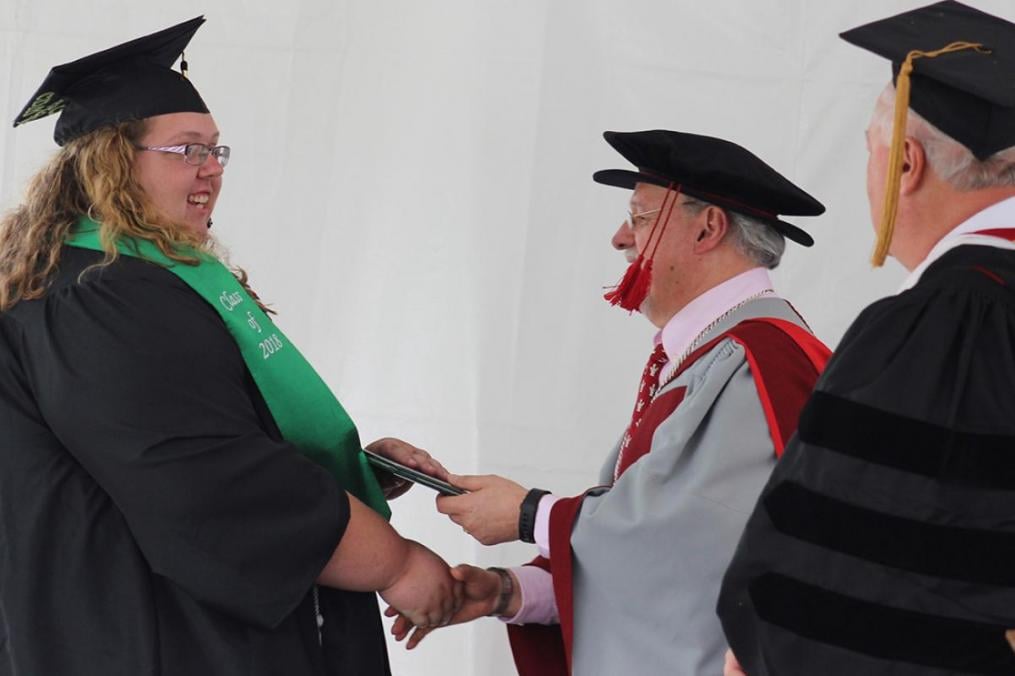 Sirene Garcia was surrounded by family on her big day. Keuka College's graduates celebrated at the College’s 110th Commencement on Saturday, May 26. Victoria Grisdale, who earned a master's degree in Occupational Therapy, soaks in the scene.