Keuka College to Mark MLK Day with Day of Service

Jan. 21 activities are to include a youth basketball clinic, a food drive, and events at Clinton Crest Manor. 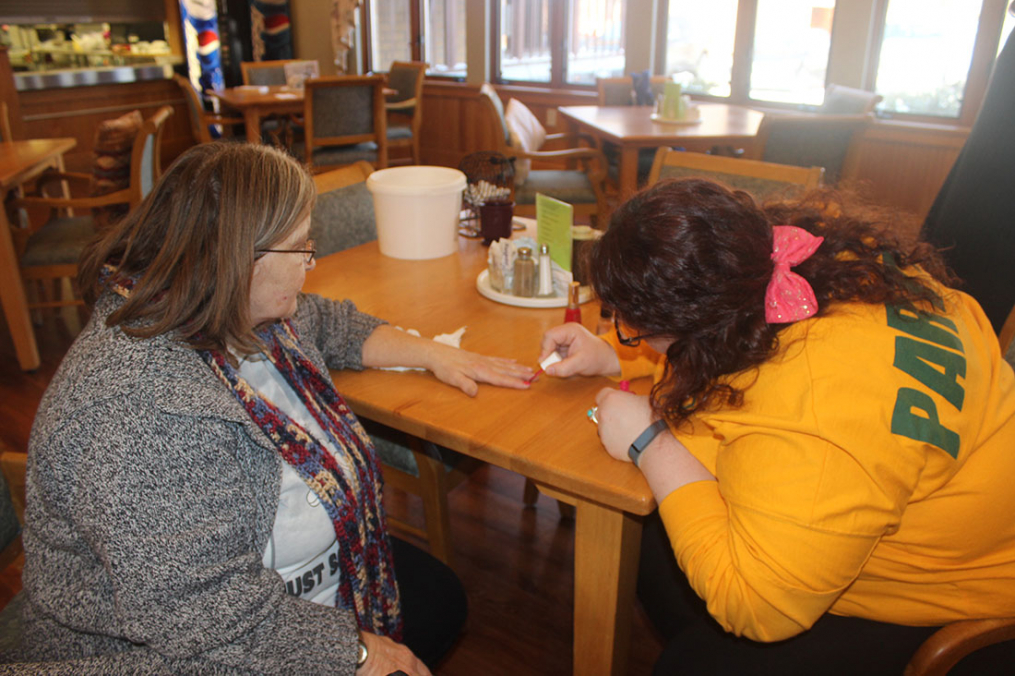 Keuka College alumni will visit with the residents of Clinton Crest Manor as part of the College's participation in the annual MLK Day of Service. One of the activities planned is fingernail painting.

Keuka College students, faculty, staff, and alumni will be among the millions of Americans participating in this year’s MLK Day of Service on Monday, Jan. 21. Volunteers nationwide come together on that day to donate their time and talents to honor the legacy of Dr. King and help fulfill his vision for a better America.

The College will take part in a variety of service projects. Members of the College’s men’s and women’s basketball teams will conduct a free hoop clinic for children in grades 1-6 at the Penn Yan Elementary School gym from 10 a.m.-noon, with support from Penn Yan Youth Basketball coordinator Keith Prather. Sign-in begins at 9:30 a.m. Kacey the Wolf, the Keuka College mascot, will also be on hand to help the teams. Pizza and water will be provided for participants.

“This program provides the opportunity for Keuka College students to engage in a meaningful service experience,” says Jamyra Young, associate director for the Office of Intercultural Affairs. “And for the young Penn Yan students to learn more about Martin Luther King Jr.’s connection to service, and for everyone to have fun playing basketball.”

College alumni will also spend some time with residents of Clinton Crest Manor from 10:30 a.m.-noon. Planned activities include an exercise event led by Terry Test ’73, a sing-along, fingernail painting, and board games, among other activities. In addition, Cherylanne Gray ’83 will bring her therapy dog, Lexie, an 11-year-old Lhasapoo, to visit the residents beginning at 2 p.m.

The visit to Clinton Crest is an initiative introduced by the programs committee of the College’s Alumni Association’s Executive Council (AAEC).

“The AAEC believes that being philanthropic isn’t just about money—giving of ourselves to benefit others is just as important,” says Laurie Adams ’83, associate director of alumni relations.

In addition, Keuka College alumni living in Geneva will conduct a non-perishable food drive to benefit the Geneva Center for Concern’s food pantry. The effort will be led by Tracey O’Donnell Wallace ’03, who has supported the center since moving to Geneva five years ago.

“We will go door-to-door collecting non-perishable items, hoping to fill a truck to donate to the food pantry,” says Tracey, who will travel Geneva’ neighborhoods from 11:30 a.m.-1:30 p.m. “I hope this effort helps give a boost to their efforts and food pantry needs, and helps them continue their good work in feeding the families in our community.”

The Center of Concern, open since 1972, operates a food pantry and store, both of which are vital sources of support to the Geneva community. The food pantry is the primary source of emergency food for Geneva’s elderly and families in need, and serves approximately 10,000 people annually.

Those interested in helping with the food collection may email Tracey at [email protected] for information.

Other activities Keuka College alumni have pledged for their communities include preparing and serving meals to the homeless or others in need, knitting hats for the homeless, ringing the bell for the Salvation Army, donating toys for children, and volunteering at Penn Yan’s Keuka Comfort Care Home. Members of the College community have been participating in the annual event since 2009.