The sculptures will be installed this week at the Schenectady County Public Library. 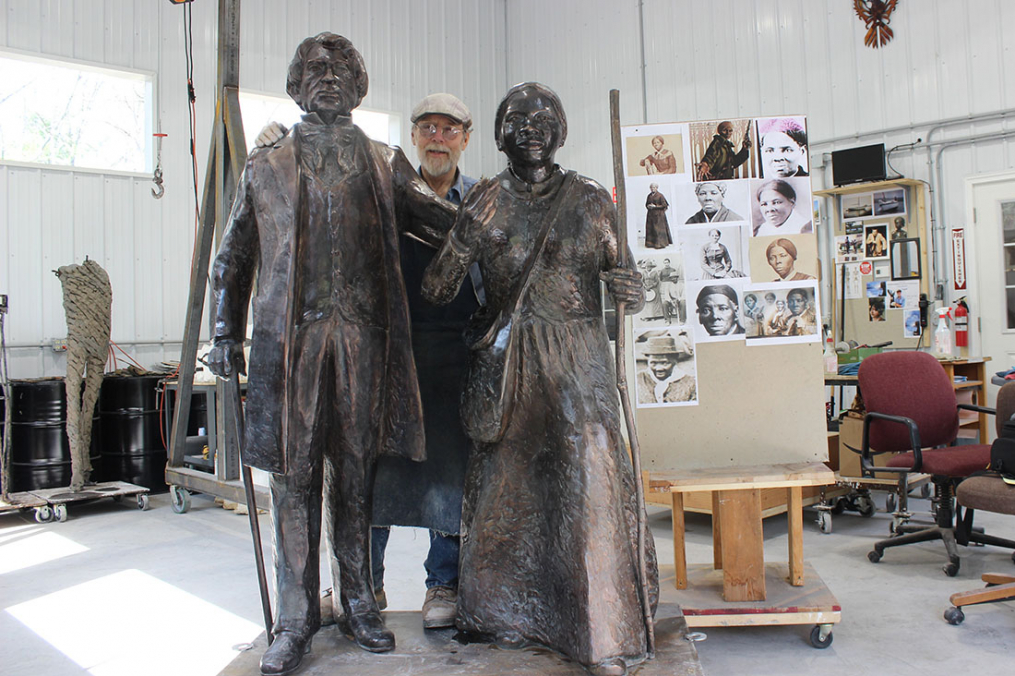 In creating his works, Professor Emeritus Dexter Benedict uses a photo board to help bring expression to those he sculpts, like the one he used for Harriet Tubman (r). Dexter poses in the middle of his latest work.

On the morning of Nov. 1, 2017, Dexter Benedict, professor emeritus of art at Keuka College, and his wife, Faith, a member of Keuka College’s Class of 1981, suffered a devastating fire at their Penn Yan studio, Fire Works Foundry.

The losses included not only the building, but many tangible pieces of both Dexter and Faith’s life’s work. For Dexter, one of those works was a life-sized commission of abolitionists Harriet Tubman and William Seward.

Dexter has recently recreated these pieces in his rebuilt studio space. He showed them off during an open house on Saturday before the sculptures will be installed at the Schenectady County Public Library in Schenectady, N.Y. on Monday, May 13, with a dedication ceremony set for Friday, May 17.The sculptures will highlight the little-known friendship between the escaped slave and the statesman.

“The friends will be atop a quarried stone, which offers a natural setting and will allow visitors to the library the chance to step up with them, or sit at their feet, or have their photo taken with them,” says Dexter.

Frank Wicks, professor emeritus of mechanical engineering at Union College—where Seward graduated in 1820— had always wanted a statue of Seward in Schenectady. Putting him with Tubman tells a story of liberty and freedom. Dexter has sculptures of inventors Thomas Edison and Charles Steinmetz in Schenectady and Frank liked them so much he thought Dexter was the right man for the job.

“Seward and Tubman had such a partnership and were concerned about all people,” says Dexter, who adds that in addition to working with Tubman, Seward served as New York State governor, then Secretary of State under Abraham Lincoln. “There is the recall of the past, and the forecast of the present that we develop sensitivity to include all people.”

Sometime in the mid-1850s, Tubman met Seward and his wife, Frances, who lived in Auburn, N.Y., a hotbed of antislavery activism at the time. Mrs. Seward provided a home for Tubman's favorite niece, Margaret, after Tubman helped her to escape from Maryland. In 1857, the Sewards provided a home for Tubman, to which she relocated her parents from St. Catharines in Canada. This home was later sold to her for a small sum, and became her base of operations when she was not on the road aiding fugitives from slavery, and speaking in support of the cause.

The pair of statues shows Seward in his 19th century dress, with a cane in one hand, and his other hand behind Tubman, giving credence to what she is doing, and giving her a sense of support in her mission.

“Tubman is going forth with a walking stick,” says Dexter. “She is standing forward, ready to go south again and rescue more people from slavery and facilitate their freedom. There is symbolic fire in her, she going, she’s alive.”

If the stick looks real, that’s because it is—Dexter got a stick from his backyard, and cast it in bronze. Tubman also carries a tote bag, with an outline of a revolver showing.

“There is a lot of work that went into these pieces, but when you are recreating heroes, you have to put in that work,” says Dexter, who had some help in creating these pieces. “Don Wertman [a member of Keuka College’s Board of Trustees] is a loyal friend, has been here on and off through the process, making clay, pouring bronze, grinding and polishing, and anything else that needed to be done. Typically, you see him in his suit and tie, but he was here in grubby clothes, on the floor, and was a significant help to me on this project. This is the other side of Don Wertman.”

Dexter began the sculptures using clay and wax models and a photo board.

“For Tubman, I have a more youthful look for her,” he says. “It was when she was younger that she was moving slaves to freedom. For Seward, I used the iconic photo of him in profile, and then other photosof him at different ages, as well as photos of gentlemen in 19th century dress.”

Though Dexter creates his models in clay, the photos give him a reference point to capture an expression.

“I tend to be a bit more expressionist, rather than a realist,” says Dexter. “The big ideas mean more to me than the exact detail of a button. I suggest a lot, and I like for the viewer to read it, see it, feel it themselves. They have to bring something of themselves to the pieces.”

Up next for Dexter are a towpath mule for the Erie Canal and a statue of President Harry Truman, which will be placed on a walking trail at the Harry Truman Library, located inIndependence, Mo.

“I guess I’ll be busy for a while,” Dexter says. 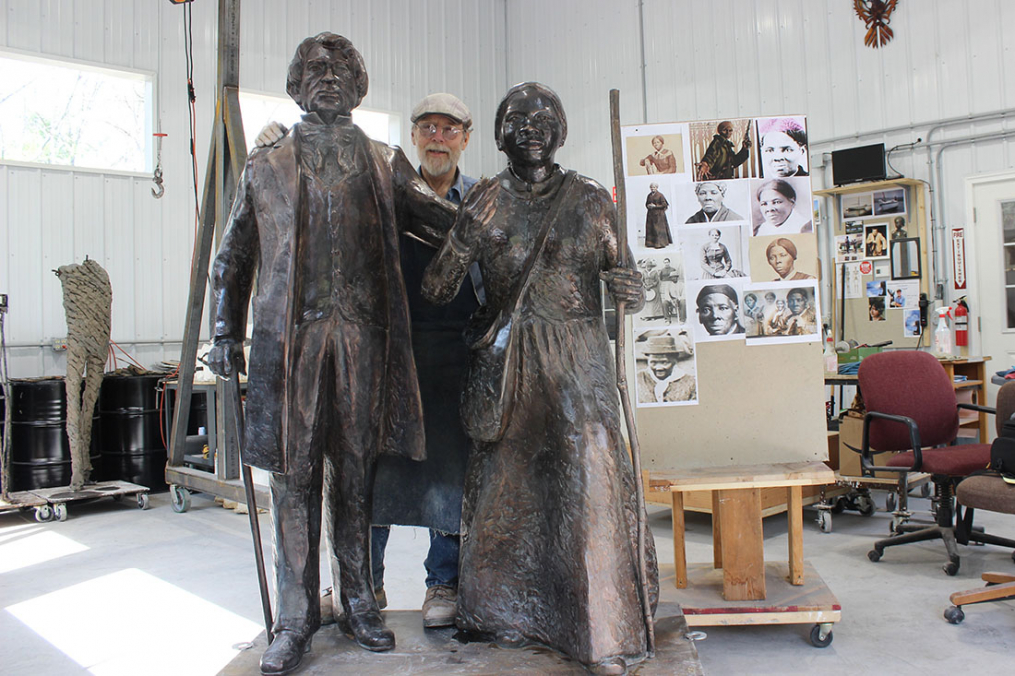 In creating his works, Professor Emeritus Dexter Benedict uses a photo board to help bring expression to those he sculpts, like the one he used for Harriet Tubman (r). Dexter poses in the middle of his latest work. 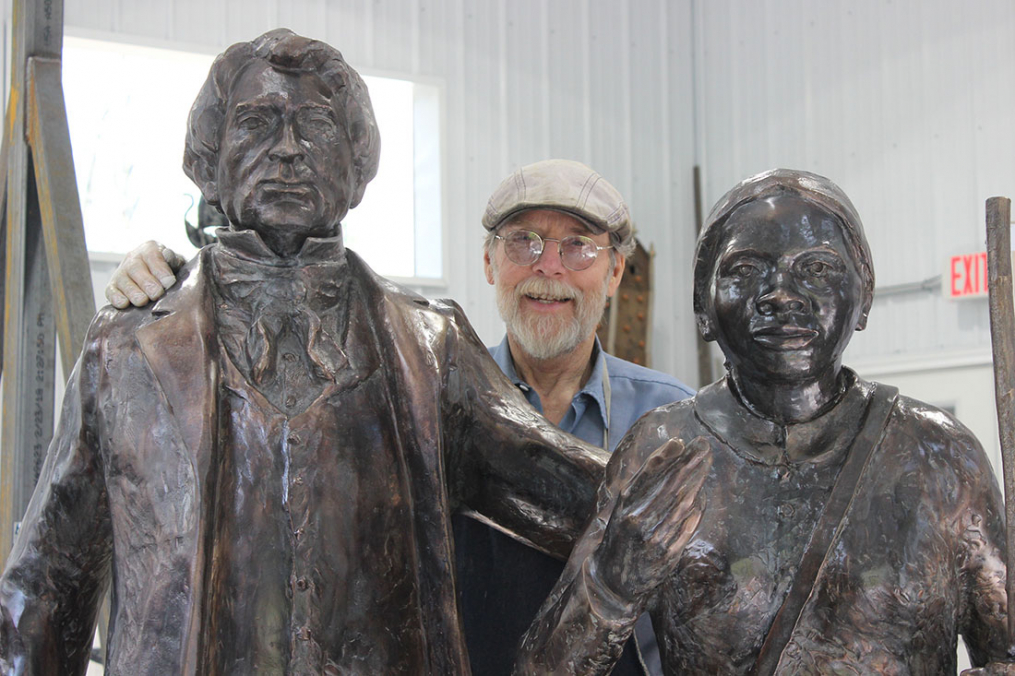 Professor Emeritus Dexter Benedict, sculpted life-sized statues of William Seward (l) and Harriet Tubman. They will be installed at the Schenectady County Public Library in Schenectady, N.Y. Above, he poses in the middle of his latest works. 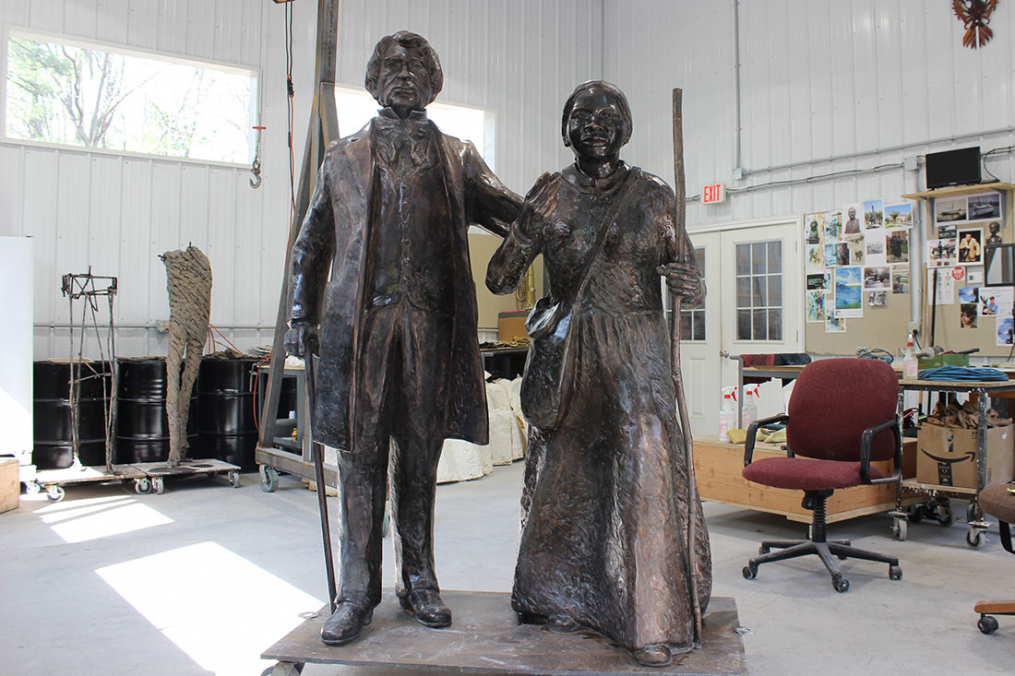 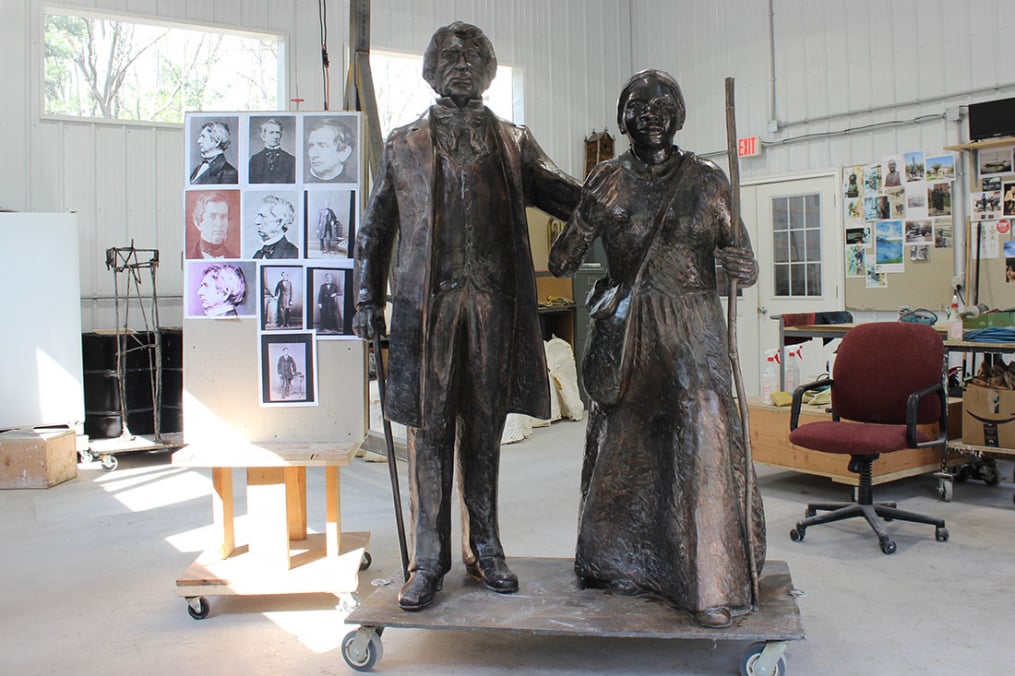 In creating his works, Professor Emeritus Dexter Benedict uses a photo board to help bring expression to those he sculpts, like the one he used for William Seward (l).