The marketing major and drone enthusiast was featured in the pilot episode of a new TV show. 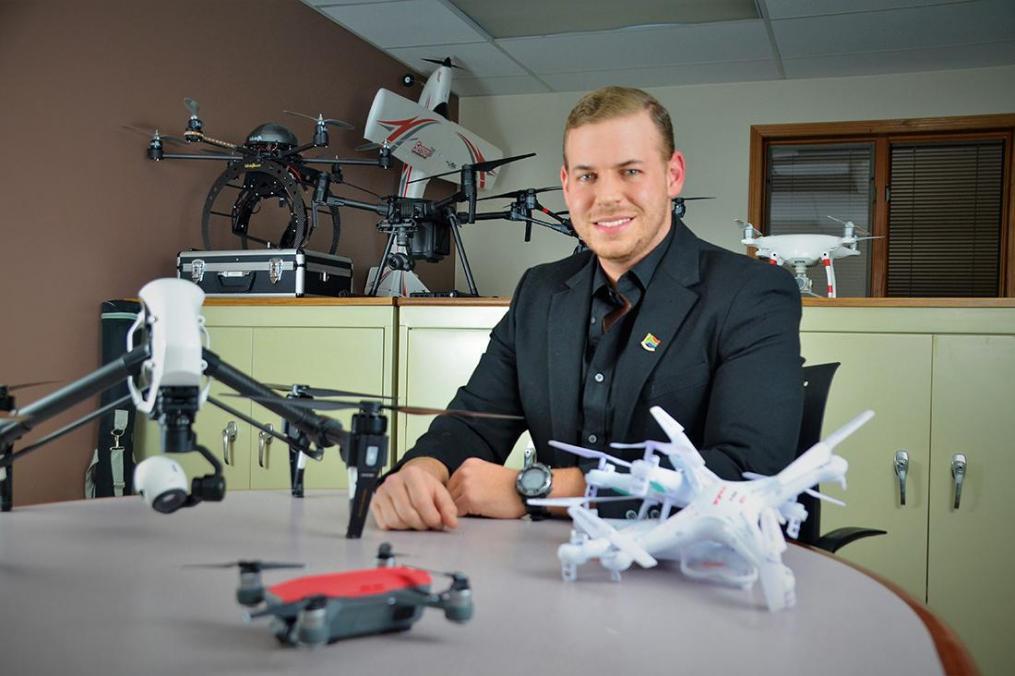 Stuart Carmichael-Green ’16 has always been an enthusiast of all things airborne.

An uncle got him interested in radio-controlled planes and helicopters in his native South Africa. And his fancy naturally turned to drones.

“There is something about drones that really caught my imagination,” he says. “It’s like a helicopter and a plane mixed into one.”

He brought those interests – along with considerable technical skills – to Keuka College when he landed on campus as a marketing major in 2013.

In fact, it was at the College that, as a sophomore, he built his very first drone.

“It was a very beginner drone,” Stuart admits. “It looked like it been put together by a 4-year-old.”

And it was in for an inauspicious maiden voyage. While flying the device over the campus, Stuart let it get out of radio range and it crashed between Norton Chapel and Ball Hall.

Indeed, he has been building – not to mention studying, flying, racing, and programming – drones ever since. He instructs pilots of drones and other UAVs, or unmanned aerial vehicles, for Canandaigua-based SkyOp. And his prowess brought him to the attention of producers for a new television show called “Ultimate Drone Battle.”

Stuart was tapped as a contestant in the pilot episode, which aired on the Fusion network in mid-January.

Big fun on the small screen

How does one land on a program that doesn’t yet exist?

“It was just a normal day at the office and one of my supervisors forwarded me an email,” Stuart recounts. “It was from a production company called Red Arrow Industries, and they said they were looking for drone pilots and unique ideas, so I emailed them.”

Stuart thought he had just the ticket: A drone he had built out of a violin – that played while flying. But the producers were intrigued by another invention.

“A week earlier, I had some drone parts laying around, and I made a drone out of a paper plate,” he says. “I sent them that drone as part my package and they were quite a fan of that one.”

Stuart got the call: He selected a teammate (SkyOp coworker Todd Fuller) and the pair reported to Nashville to shoot the episode.

“It was not as easy as I thought it was going to be,” he admits. “I thought it would be a bit of a walk in the park.”

No walks. No park.

What Stuart and Todd – dubbed the Dynamic Duo – and their two competitors got were several 12-hour days of shooting. “Ultimate Drone Battle” requires teams to build drones in under four hours, then compete in challenges that test not only the machines but their operators’ dexterity and operational skills.

One challenge saw the teams use drones to burst water balloons above their competitors, for example, while another required navigating a pizza-themed obstacle course.

“They were all pretty crazy,” Stuart says of the challenges. “Drones and water never mix. … But the hardest was the obstacle course. Homemade drones are not meant to fly in areas like that. They’re not nimble.”

So how did the Dynamic Duo do?

“We kind of got it handed to us,” Stuart says. “The other team was absolutely fantastic; they’ve been working in technology all their lives.”

Still, that may not be the end of Stuart’s TV career. “Ultimate Drone Battle” has been picked up by the Fusion network, and he’s hoping for a return call once taping for a full season begins.

In the meantime, Stuart has his hands full at SkyOp, which provides training and instruction for pilots using drones in an ever-growing variety of industries. In fact, Stuart says, the unmanned flying machines are a huge growth market.

From military applications, to agriculture, to surveying and mapping, to public safety, Stuart says, “drones will replace everything.”

One example: Pre-programmed drones equipped with spray tanks that can fertilize a field in one-tenth the time of traditional methods.

Stuart offers another application that might be more appropriate for another TV mainstay: Shark Week.

“There are sharks off the beaches in South Africa, and we have shark watchers on our beaches every day – people who sit and are paid to watch the oceans,” Stuart says. “We’re in talks with South African municipalities to have drones fly patterns over oceans to watch for the sharks. With thermal imaging, you can be 100 percent accurate.”

Stuart says he thought about pursuing a drone-related career while taking marketing classes at the College.

“When I first discovered drones I thought about marketing,” he says. “I saw the need for it in aerial photography. My professor was talking about how earlier aerial photos were made – what it used to be and what it is now. … After seeing that, and then Amazon drone delivery, it struck me that drones were growing exponentially. I thought, ‘it would be silly not to try your hand.’”

Stuart also leans on his marketing skills when sharing his enthusiasm for the technology with potential clients, pilots, and in occasional media interviews.

“I definitely take a lot from Keuka College when it comes to that,” he says. “Taking courses with Professor (David) Romm sure did help.”

And as he reflects on his Keuka College days, Stuart realizes, his College experience even prepared him “Ultimate Drone Battle” in a less traditional way.

“Now that I think of it,” he recalls, “Yes! I’m in one of your admissions videos for new students!”