College students, faculty, and alumni pooled their talents to create a traveling exhibit that shares the story of the Finger Lakes. 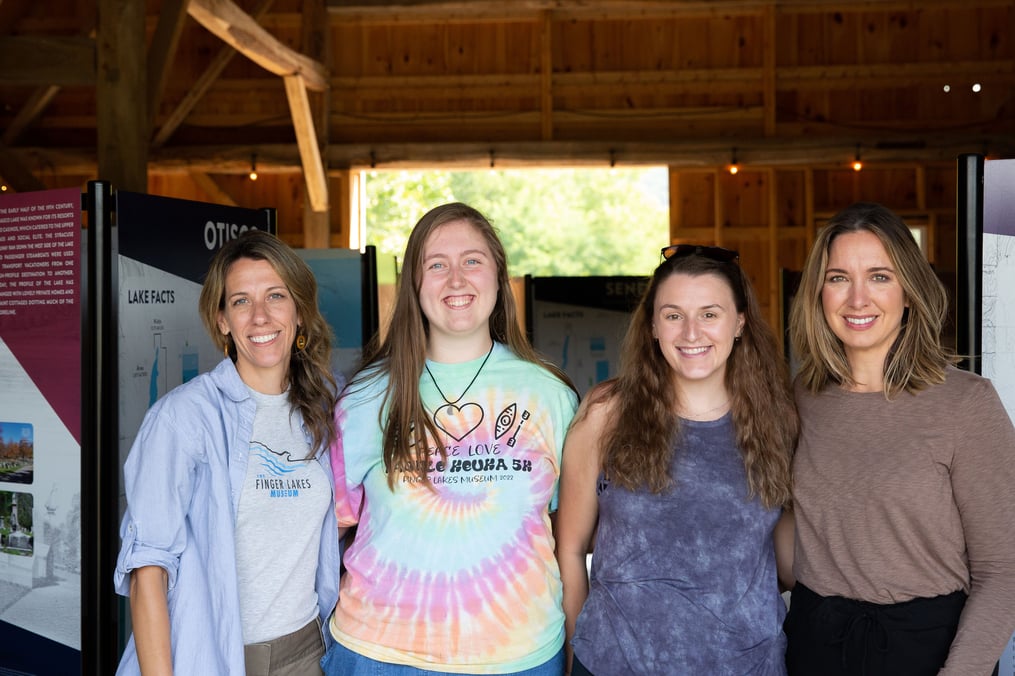 Keuka College alumna Natalie Payne M’14 has been involved with the Finger Lakes Museum since its inception in 2008.

She has long collaborated with local graphic designer and Keuka College Professor Carrie Kehoe on projects to elevate the museum’s visibility.

So, when the idea came up of creating a traveling exhibit to celebrate the geological and cultural history of the Finger Lakes, Natalie, now the museum’s executive director, knew exactly where to turn. 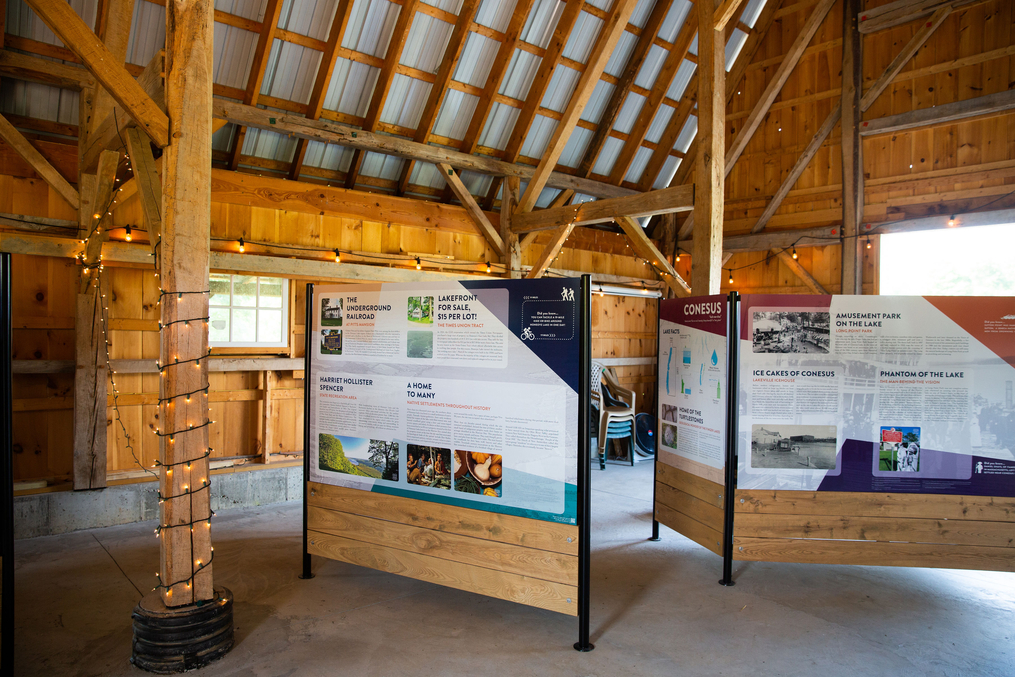 The panels were displayed at the Finger Lakes Museum in Branchport before traveling the state.

Prof. Kehoe, the College’s Visiting Assistant Professor of Visual Communication Design, spent more than a year conceiving and designing the exhibit. She created a series of nine free-standing panels: five three-sided displays for the larger lakes – Canandaigua, Keuka, Seneca, Cayuga, and Skaneateles – and four parallelograms with two sides a piece devoted to the remaining lakes.

“For design inspiration, I thought in terms of large, bold graphics,” said Prof. Kehoe, who worked with yet another Keuka College alumna, Ayrielle Zeno ’19, on the concept development. “And drawing color inspiration from not only the rolling hills and beautiful waters of the Finger Lakes but the beautiful sunsets and sunrises.”

The roughly 6-by-7-foot displays showcase various aspects of the lakes, including geology, historical figures, and commerce. But Prof. Kehoe wasn’t done developing the project just yet.

“What’s really exciting is that, at the close of the design of these panels, I was teaching the advanced design studio within Visual Communication Design here on campus,” she said. “And I love incorporating experiential learning into the classroom.”

Seizing the opportunity, she directed her students to create a complementary display for the museum. She asked them to use the design cues she had established in the other panels to create an introductory, memorial, and interactive panel.

The assignment didn’t end there. The students presented their work to one another and the class voted on the top three designs. Their professor then took those designers – Sydnie Brown ’22, Sarah Tower ’22, and Brad McKnight ’22 – to meet with Natalie and Museum Director of Operations Natalia Kivimaki to present their concepts. 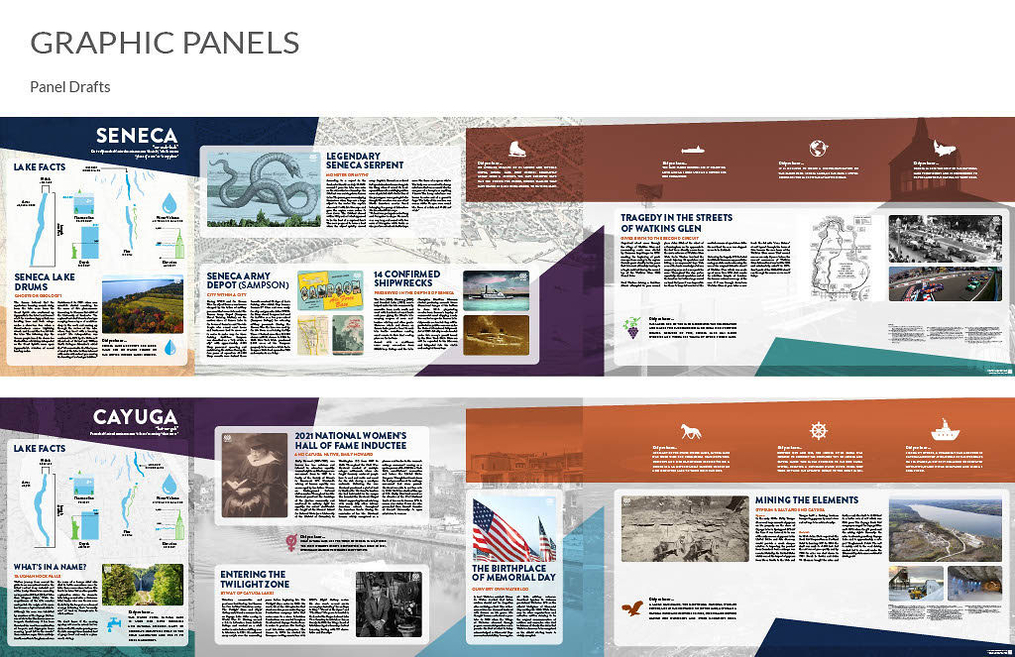 A draft of a panel's content is shown here. The finished displays showcase various aspects of the Finger Lakes, including geology, historical figures, and commerce.

“It was such an exciting opportunity for the students to go through the entire design process and understand that design does not end in the computer,” said Prof. Kehoe. “They needed to understand the print timelines, limitations with having to specify materials for indoor and outdoor exhibits, as well as the interactive nature of the two panels.”

The interactive displays, which prompt users to share their memories of the region, select their favorite Finger Lake, and chart their journey through the lakes, were well-received by museum officials.

“We loved them,” said Natalie. “We were really very happy to work with the students in finalizing them.”

She was impressed by more than the designs.

“Before I even returned home after the three students had presented their materials, Natalie sent me an email asking, ‘what can you tell me about Sydnie? I would like to consider her for a position,’” said Prof. Kehoe. “I couldn’t have been more excited for both parties, really; I thought it would be an incredible fit.”

It was. Sydnie is now Assistant Director of Fundraising and Communications at the museum.

“When I saw the message in my inbox about a potential job, I was shocked,” said Sydnie, whose duties at the museum include overseeing social media, designing and creating marketing materials, and assisting with grants. “I wasn’t expecting a job position to be available at the museum but I had done some work with them in my second Field Period, so I was familiar with the organization and knew this could be a perfect opportunity.”

Prof. Kehoe said the exercise not only gave her class a first-hand look at what it’s really like in the design profession, where there are practical challenges and design parameters to be adhered to, but it also helped connect them with the broader community. Sydnie appreciated both of those benefits. 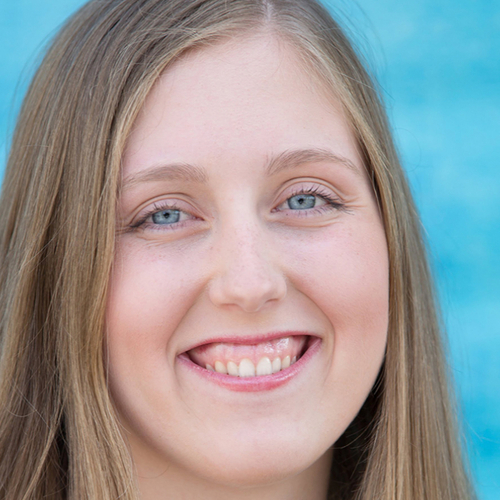 This project helped me gain real-world experience working for a local client. It’s also rewarding to see the project printed and on display – to see how it came together and the impact the exhibit has on the community and all those who played a part in making it happen.

The installation was open to the public through Oct. 21 at the Branchport museum. It then hit the road. 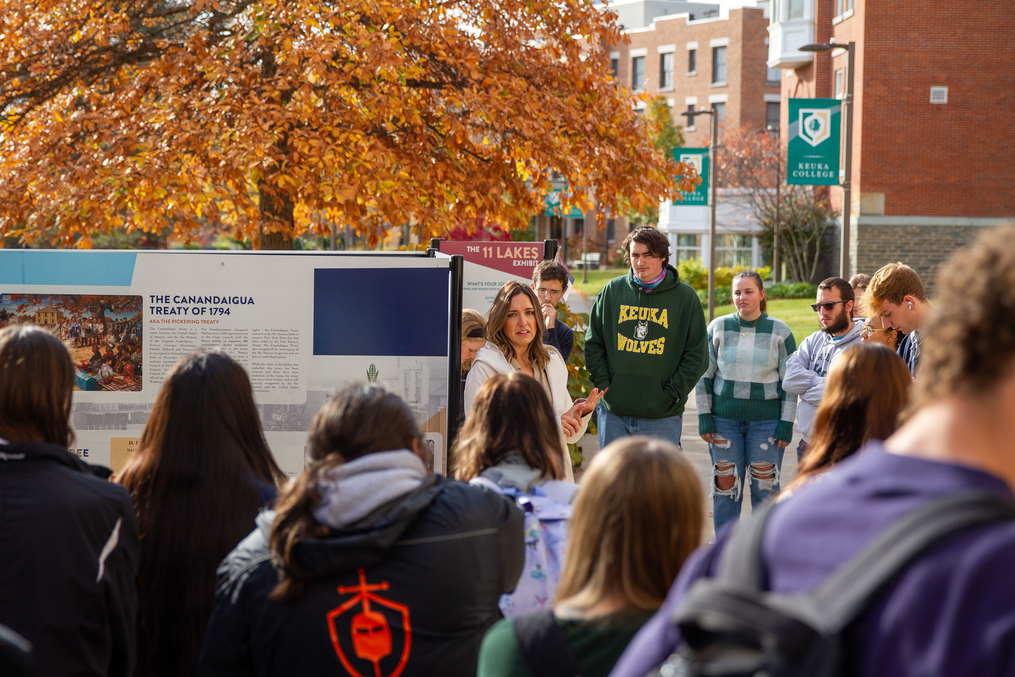 Visiting Assistant Professor of Visual Communication Design Carrie Kehoe discusses with students the free-standing panels that have been temporarily installed outside Hegeman Hall.

“It’s been very well received,” said Natalie. “Everyone has walked away very, very pleased at having learned more about the Finger Lakes.”

“Even though I’ve lived in the Finger Lakes, went to college in Finger Lakes, and grew up visiting the Finger Lakes, I was unaware of the rich cultural history here,” said Prof. Kehoe, who grew up in the Genesee Valley and earned her master’s degree at Cornell University. “We hear names every now and again of the influence that the area has had historically; however, I was amazed at what I Iearned through this exhibit.”

Want to learn more about our Visual Communication Design program?

Fill out our form to connect with us!