In Nicaragua Building Much More than 4 Walls 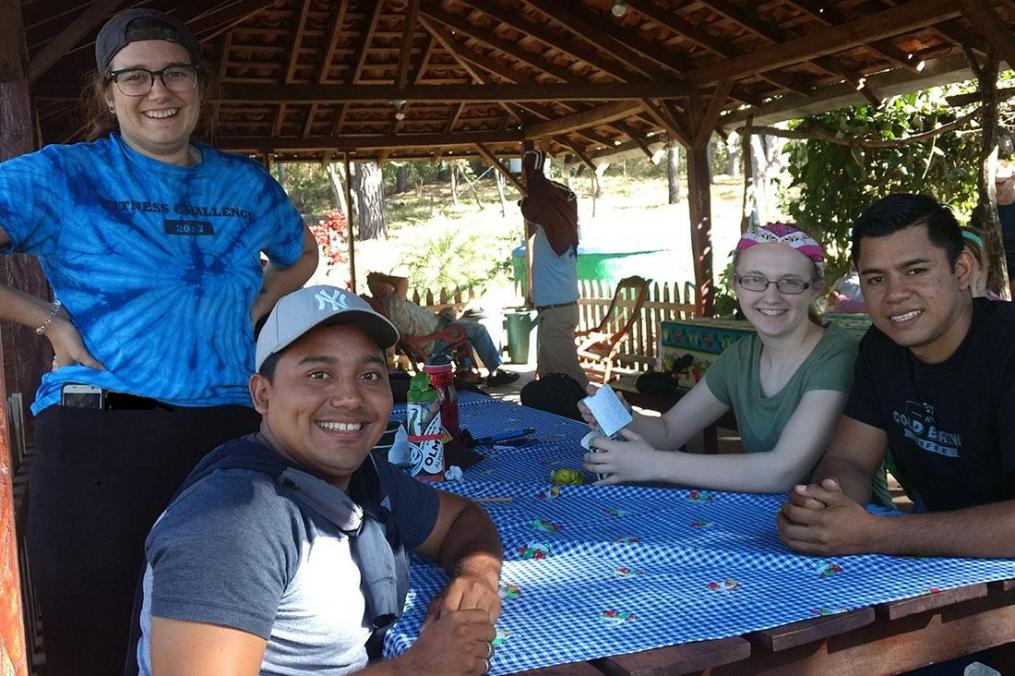 As a social work major with a minor in Spanish, Keuka College junior Miranda Milan has been exposed to many facets of the Latin American culture. And while her classroom experiences have taught her much about the people, language, and customs, she wanted something more tangible.

Enter a group Field Period® opportunity and the chance to travel to El Sauce, Nicaragua, with members of the Rochester-based 4Walls Project. The project’s mission is to change the lives of families in El Sauce by building safe, sturdy houses.

“This trip gave me the chance to learn more about the Latin culture in the best possible way—by experiencing it firsthand,” says Miranda, who received a Judith Oliver Brown Memorial Scholarship. The award, which honors the 1963 Keuka College graduate for whom it is named, is designed to assist students pursue culturally oriented Field Period® experiences.

“In a previous Field Period®, I worked with immigrant youth, many of whom were from Hispanic countries,” says Miranda. “Hearing them talk about their experiences, and seeing the cultural differences, also helped pique my interest in this trip.”

Miranda says she learned, and will remember, many things from her travels, and she believes her passion and dedication for both social work and the Latin culture are deeper than ever. One thing in particular that stands out to her is the day she and other volunteers finished building a house for one family.

“The day we finished, the family gave us a letter. They were thanking us for ‘thinking of the poor people,’ the generosity of our time, and giving them the safety they had lacked before,” says Miranda. “Some of these people, such as the families we built for, had a shanty for a house, with dirt floors with plastic walls. Yet, they were happy, and I am thankful that I had the opportunity to help them get a safe place to live.”

And being in a new environment helped her see things from a different point of view.

“We buy so much based solely on the comfort aspect, rather than our actual need for them,” she says. “This trip changed my perspective on my own culture and my life, and made me realize just how much I take for granted, like electricity at the flip of a switch and clean, running water.”

Aside from the relationships Miranda formed with the Nicaraguan people, she says one of her favorite parts of the trip was touring the city of Ocotal.

“I have always been a lover of nature and this part of the trip was so beautiful,” she says. “From riding horses, to the coffee plantations and tortilla-making tours that we had, the sunsets we saw, staying with host families, and even the 25-minute hike that just about killed me. The entire time I was in awe, both of the rural culture and the view.”

And while she admits the hike was challenging, perhaps a larger challenge Miranda overcame was being less nervous when speaking Spanish.

“Being in Nicaragua was the perfect opportunity to practice my Spanish-speaking skills, and the people were ready, willing, and happy to help me learn,” she says. “I did practice a lot, but it was the children who helped me the most. They were so willing to talk to me, even though I knew my Spanish wasn’t perfect.”

By going to Nicaragua, Miranda learned she has the ability to submerge herself in another culture “and to not only keep my head afloat, but to absolutely love it,” she says. “Since going on this trip, I know I want to work with those who are multicultural and multilingual.”

And she believes she will be able to better serve the American-based Hispanic clients she wants to work with, particularly as she becomes more proficient in both the Spanish culture and language over time.

“I think this trip will have a significant impact on my future career,” she says. “Not only was I able to help build a house, I was personally transformed. This experience is going to help me in more ways, probably, than I know or can say. I have definitely taken many of the lessons to heart, and I learned what I believe is the true value of helping another, simply because you can. That is not something that can be taught in a classroom—that is something that you simply have to feel. It is amazing what you can learn out there, and most of the time, ‘getting out there’ is the only way to truly learn it.”