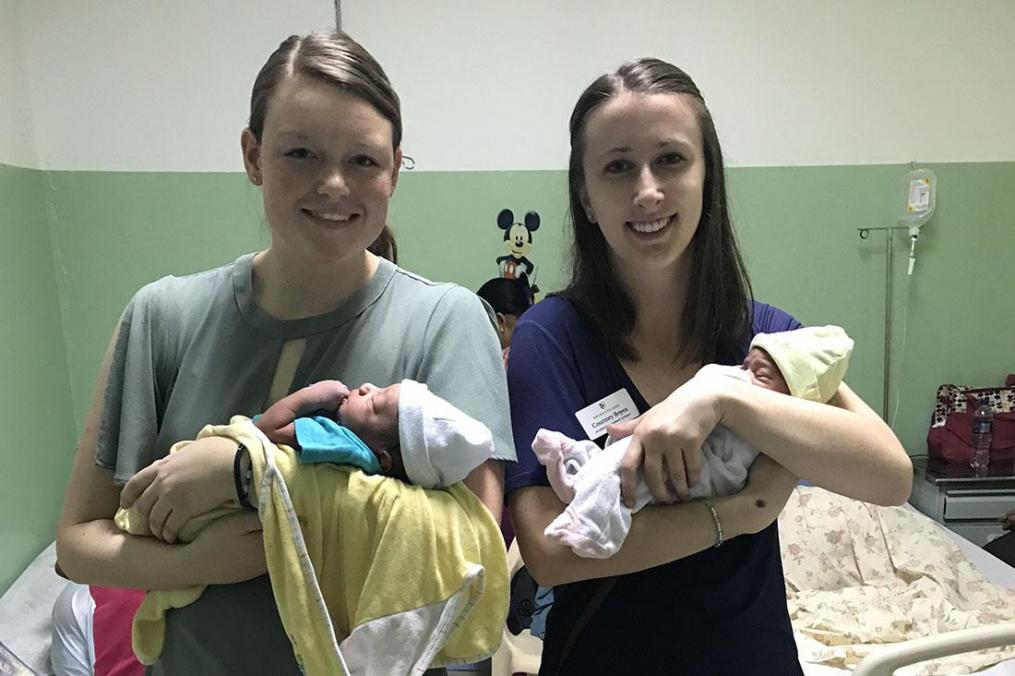 Kristin McGraw '18 (left) and Courtney Boyea '18 were two members of an interdisciplinary team who traveled to the Dominican Republic for their January Field Period®. One of the places they visited was a hospital's maternity ward.

Over the span of nine days in January, a group of Keuka College students had the opportunity to explore healthcare techniques in the Dominican Republic. The students, all majoring in occupational therapy, nursing, or social work, were part of an interdisciplinary group Field Period®. Together, they were able to develop a greater understanding of the healthcare systems outside of the United States, as well as be immersed in a new culture.

Going on the trip was questionable at first for Kristin, because she knows that financial burden can come with travel, particularly when traveling abroad.

“But I took a moment and realized that I may never have this chance again, to go on a trip with people who have the same goals and desires that I have—to make a positive difference in someone’s life,” Kristin says. “The Judith Oliver Brown award helped me in my cultural expansion, and provided me with the opportunity to view life through a different lens.”

“I want to travel and experience life instead of focusing on material things,” says Courtney. “This is why the interdisciplinary trip to the Dominican Republic was an opportunity I could not pass up. There is so much that can be learned—even about yourself—from traveling to a new country and experiencing another culture and its people.”

And she found the Dominican people to be friendly, warm, and open.

“They were so appreciative to have us there and could not wait to show us what they have,” says Courtney. “Each place we went, we were greeted like celebrities. We went to a nursing technical school and they had signs and songs prepared for us before touring the facility.”

In addition to touring the nursing school, Kristin says, the group was able to visit and learn about other facilities as well, including the largest children’s hospital in the country — Robert Reid Children’s Hospital — a rehab center, an elder home, an orphanage, and a special needs school.

“Something I will always remember from this trip was my experience at an orphanage for young girls,” says Kristin. “They were so excited to have us there, and I think we were even more excited to be there. Even though I could not speak the same language, we still communicated through non-verbal communication. My favorite part of the entire trip was sitting on the ground, in a circle in the sun, while a little girl braided my hair.”

And though the language barrier was difficult, even with a translator, Courtney says she too found other ways to communicate.

“Through simple gestures, facial expressions, touch, and sharing small moments, I was able to communicate more effectively,” she says. “It is amazing how far a simple touch can go when you are working with a variety of patients.”

Those “small moments” are something Courtney will never forget.

“One of my favorite memories was getting to interact with some of the kids at a local school, where we ran a diabetes clinic,” she says. “The students seemed to be on recess, and I got to play a couple of simple hand-clapping games with them. When we were about to leave, the kids gave me the biggest and tightest hugs. I have always loved working with kids and this was an unplanned activity, which I think is why it is so special to me.”

Wanting the Best for Each Patient

While spending time with children at the orphanage and the school were highlights for both Kristin and Courtney, they were eager to learn different techniques and treatment plans the health care workers provided to their patients.

“Many of the individuals in the rural areas are unable to receive the care that would be provided in the U.S.,” says Kristin. “For example, we conducted a home visit in a rural area, and within minutes the entire community knew that we were there. They contacted the patient’s family members who listened to our suggestions and watched the treatment of the wound.”

Kristin adds that there were also differences in hospital equipment, with rooms being small, open rooms and holding 6-10 basic hospital beds.

“There are no privacy laws like HIPPA in the Dominican,” Courtney says. “Patient records are left in sight and you can go into most patient rooms and observe without much question. I was able to hold a newborn baby without even asking the mother. Strangers would never be allowed into a newborn baby’s room here, especially without thoroughly washing their hands and known to not have any illnesses. In the Dominican, it is totally normal to go into these types of rooms and hold someone else’s child.”

But that doesn’t mean the hospital staff is lax in their care. In fact, Kristin says it is quite the opposite.

“The Dominicans are so passionate about their careers, and they genuinely want the best for all of their patients,” Kristin says of the healthcare professionals. “As a future occupational therapist, I am determined to portray as much passion and commitment to my patients as the Dominicans did to theirs. I was pleasantly surprised how much I learned in just nine days. It was truly a trip of a lifetime.”

“This trip to the Dominican Republic made me realize how important culture is to providing effective patient care,” she says. “I will forever remember the people I met, and how this has impacted me. The experiences I was given will never leave me.”