Students in Dr. Chris Leahy’s history class never thought they’d identify so much with a Keuka College alumna from the 40s—until they met Rita. Now, they're tasked with preserving her legacy for the next generation of Keukonians. 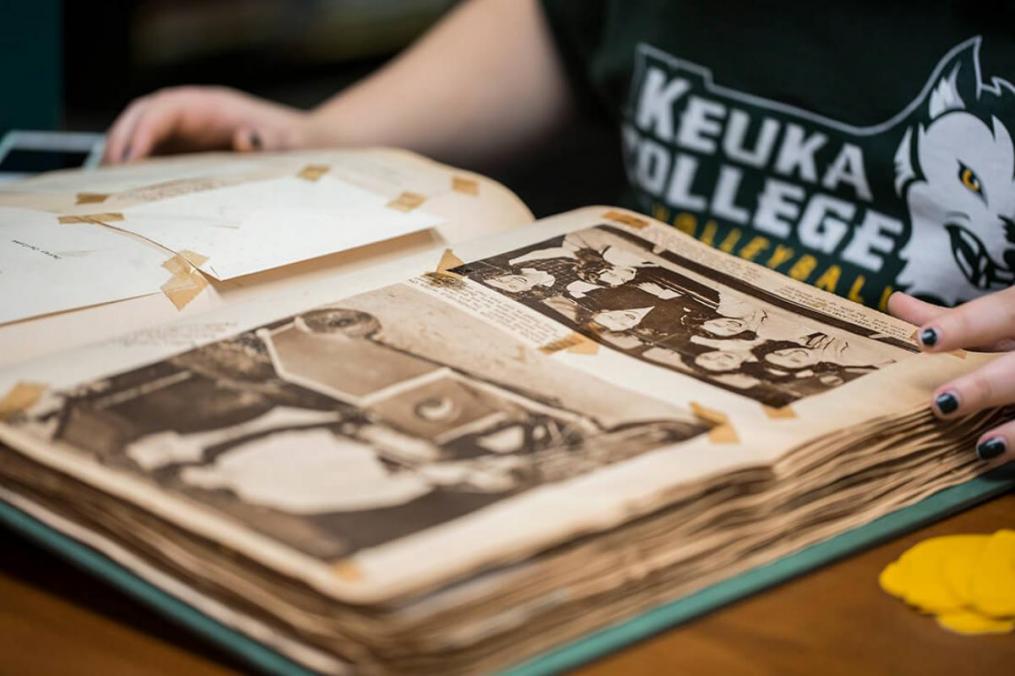 “It was brought to my attention that you girls were in the village for Sunday dinner in informal dress,” wrote Dr. Katherine Gillette Blyley, the College’s then-dean. “I do not know what explanation you have for such conduct.”

This warning is just one of hundreds of items Rita Goldberg Miller ’45 saved in a robust scrapbook that’s now part of the Keuka College archives. The scrapbook, along with Professor Mae Hanna Baker’s 1918 diaries, the Dr. Martin Luther King Jr. collection, and the yearbook collection, are all in the process of being digitized by Dr. Chris Leahy’s History of New York State class. The items will be housed as digital records on websites including Shared Shelf and Artstor, says Ms. Kimberly Fenton, who maintains the archives.

“History can be, and is, much more than just reading names and dates,” says Dr. Leahy. That’s why, this semester, he chose this entirely hands-on project for his students. The former Professor of the Year felt it was important to get these primary sources online so that everyone from historians to students could use them. “The students are democratizing scholarship for those who can’t afford to, or don’t have the time to, access these materials.”

What struck Dr. Leahy most about project was how connected the students feel “not only to students from the 40s and 50s, but also to the College and its history,” he says.

One of the students in his class, Riley Rodgers ’16, echoes this sentiment. “When we began, no one knew anything about Rita,” she says, referencing the rebellious alumna who added to the scrapbook for four years. “We didn’t know what we were getting ourselves into. I didn’t think I was going to get so attached,” Riley says.

The student researchers were particularly impressed by Rita’s detailed documentation of the World War II. She collected Nazi Occupation currency, saved her ration stamps, and clipped articles out of the newspaper that mentioned soldiers, and even friends, who were missing in action.

“This project is revolutionizing the ways we are doing historical research,” Dr. Leahy says. “Students are becoming conversant in the language of digital history and scholarship.”

“It’s promising to think that this generation might support and be advocates for our history. I think that’s so important. If they don’t care about it, no one is going to take care of it,” says Ms. Fenton.