Security Officer Paden Frenney Saves the Day… and a Man

The Keuka College officer was instrumental in the rescue of an ice fisherman who fell through the ice. 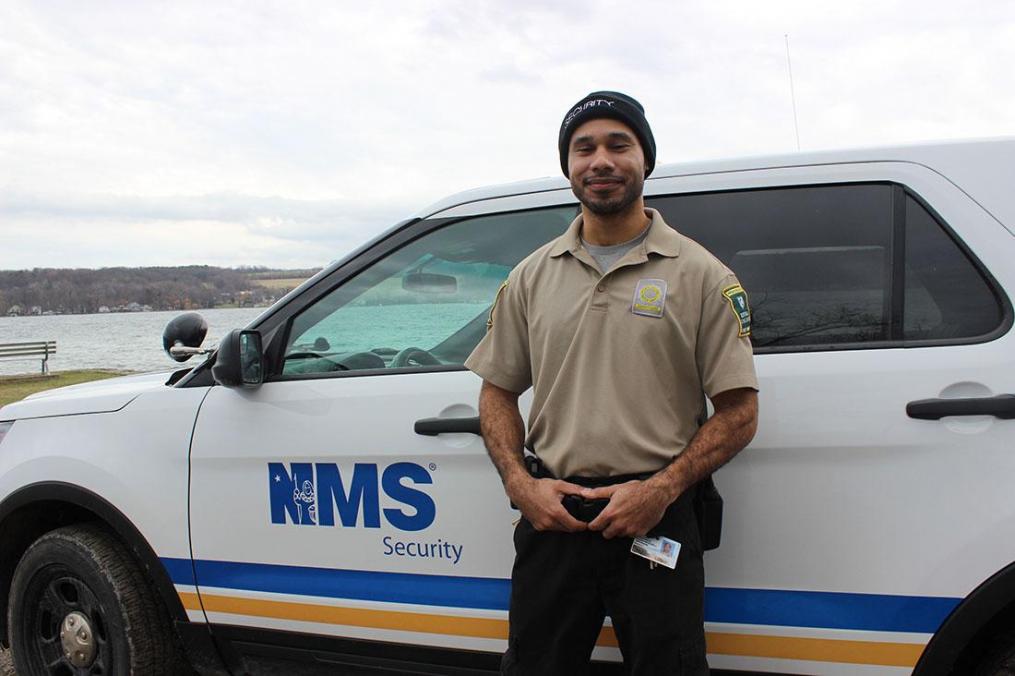 NMS Security Officer Paden Frenney stands at Point Neamo, where he pulled two men from the icy waters of Keuka Lake over the winter.

As an officer with Keuka College’s campus safety provider, NMS Security, Paden Frenney’s job is to ensure the safety of each member of the College community. And it’s a job he takes seriously.

Among his duties is to patrol the campus, both by vehicle and on foot. Most days, Officer Frenney’s rounds are quiet and fairly routine. But he is always vigilant for anything out of the ordinary.

Such was the case on a cold day in February.

“It began as a normal shift,” says Officer Frenney, whose hours are 4 p.m.-midnight. “About 6 p.m., I was walking around the campus, headed to Norton Chapel to lock it up for the night. I saw some lights out on the lake and went to investigate.”

Officer Frenney walked down to Point Neamo and met an ice fisherman just coming off of the lake. He had been fishing with friends who were still on the ice.

“All of a sudden, we both heard the ice crack and saw that another ice fisherman had fallen through the ice,” says Officer Frenney. “The fisherman who had just come off the lake was prepared and had a rope and a life preserver with him. He grabbed it, started calling to his friend, and headed back out onto the ice.”

But that man also fell through the ice, and now there were two men in the water. Thinking quickly, Officer Frenney was able to pull the second man out and get him onto the beach. Together, both men found a safe spot from which to throw the rope and life preserver to reach the first man in the water.

“Once I knew the man had the life preserver, his friend and I slowly started pulling him out of the water and onto the beach,” says Officer Frenney, who had called Campus Safety Lieutenant Ron Wentz to assist.

The man who had fallen through the ice had some protective clothing and was in the water for about seven minutes, says Officer Frenney. The average temperature of Keuka Lake in February is near 35 degrees so, without proper gear, hypothermia can set in after just 15 minutes.

Once the fisherman was out of the water, he was able to get into his car, change into dry clothes, and warm up. After talking with the fisherman and ensuring his safety, Officer Frenney and Lt. Wentz continued their respective shifts.

“I never expected to have to rescue someone from the water,” says Officer Frenney. “It all happened in the blink of an eye, and then my shift was right back to normal.”

Without Officer Frenney’s quick action, the incident could have been so much worse, says Director of Campus Safety Jim Cunningham.