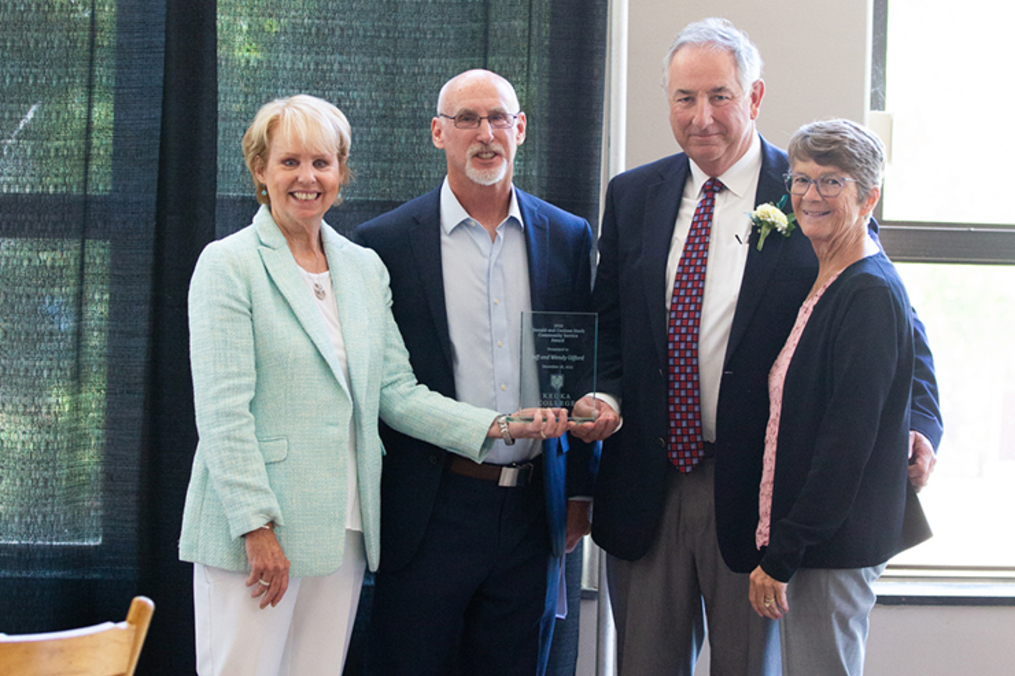 Penn Yan residents Jeff and Wendy Gifford have longed worked as a team for the betterment of their community.

This week, that community honored them as a team.

The Giffords received the 2021-22 Donald and Corinne Stork Award for Community Service in front of a crowd of nearly 100 in the Geiser Dining Commons on the campus of Keuka College.

“Jeff and Wendy have an impressive resume when it comes to social responsibility, and their deep dedication to their community and its residents can be seen each day,” said Steve Stork, in helping present the honor on Thursday, Aug. 11.

That impressive resume is crammed with efforts on behalf of numerous Penn Yan and Prattsburgh organizations. Jeff was a longtime high school basketball coach at Prattsburgh schools, served as chair of the region’s former Industrial Development Agency (now known as the Finger Lakes Economic Development Center), and was one of the founders of the original Buckwheat Festival. Wendy served as the school nurse for 13 years at Prattsburgh Central School, volunteers at Keuka Comfort Care Home, and has assisted at numerous COVID-19 vaccination clinics.

“Thank you to Keuka College for making this award possible,” said Jeff. “This honor is especially meaningful because it recognizes us as a team. We have never looked at anything we have done for the awards or personal recognition. It’s all about helping people and the community to make things better. The real reward is when we look back and see what has been accomplished, and we can take pride in having been part of something that has made a difference in people’s lives.”

Recognition for the Giffords also rang out from Albany. State Assemblyman Phil Palmesano and state Sen. Thomas O’Mara co-sponsored a state Proclamation from the New York Legislature expressing “their collective appreciation, gratitude, recognition, and tribute to Jeff and Wendy Gifford.”

Keuka College established the Donald and Corinne Stork Award in 1991 to recognize individuals who exemplify the College’s historic commitment to the value and benefit of using individual initiative for the common good. The award was named after its first recipients, the late Penn Yan residents Corinne and Donald Stork.