Former White House advisor Anita McBride delivers the 32nd annual Carl and Fanny Fribolin Lecture inside Norton Chapel on Friday, May 6. She shared the often-underappreciated actions and influence of U.S. first ladies over the years.

With their proximity to the nation’s leaders, high visibility, and power – when they wish – to generate attention and effect change on issues of civil and social importance, U.S. first ladies have been shadow leaders of a sort for more than two centuries.

White House veteran Anita McBride is working to bring that history out from the shadows.

The longtime White House advisor and former chief of staff to first lady Laura Bush shined a spotlight on first ladies and their achievements during the 32nd annual Carl and Fanny Fribolin Lecture at Keuka College on Friday, May 6.

“In crisis situations, Americans often look to political leaders for direction, comfort, empathy, and solutions,” McBride said, citing the thesis of an academic textbook on first ladies she and her co-authors recently completed. “But often overlooked are the words and deeds of a powerful group of non-elected public figures – first ladies – to confront controversy and demonstrate what President Lincoln called, ‘the better angels of our souls.’”

Throughout her 60-minute presentation, McBride led the audience at the College’s Norton Chapel through more than 230 years of first ladies and their consequential and sometimes controversial positions and actions regarding civil and human rights – “From Martha Washington, a slave owner, to Michelle Obama, a descendent of slaves,” she said.

Some figures – and examples – are widely known: Eleanor Roosevelt’s vocal opposition to what she called “the injustice of racism,” for instance, and her resignation from the Daughters of the American Revolution after the organization blocked opera singer Marian Anderson from performing at Constitution Hall because she was Black.

Less revered through history are the stands of first ladies like Lucy Hayes, who was an abolitionist; Helen “Nellie” Taft, an early advocate of racial equality; or President Woodrow Wilson’s first wife, Ellen Wilson, who helped improve atrocious living conditions for African Americans in the District of Columbia. 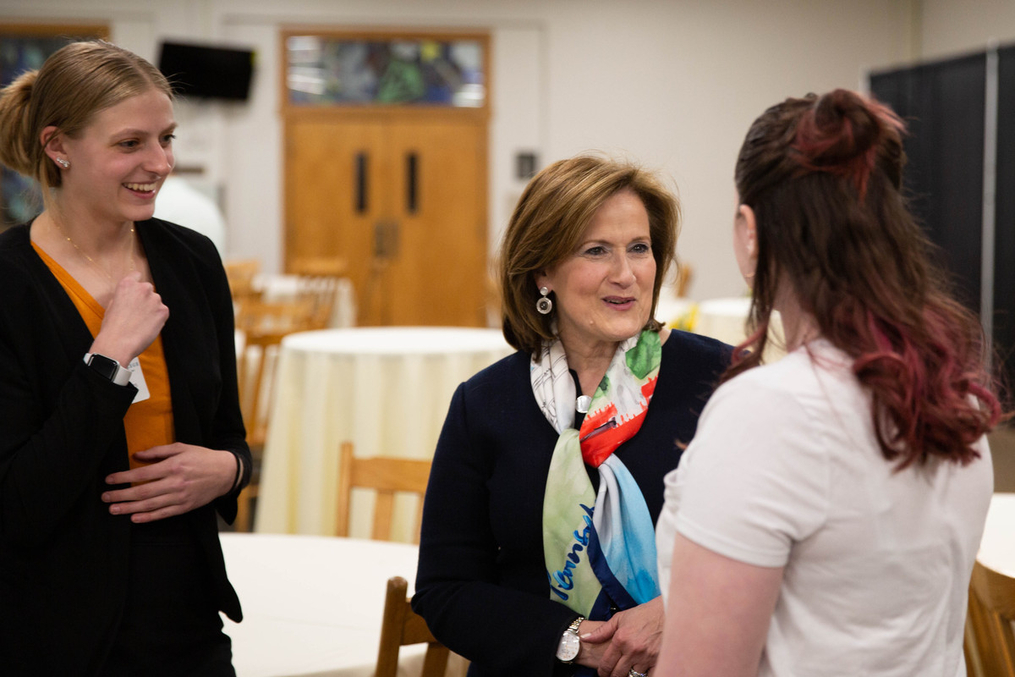 Former White House advisor Anita McBride spent part of her visit to Keuka College meeting with students. Above, she speaks with Sarah Paradiso '25, at left, and Jillian Montesano '25.

“Historically, the relationship between first ladies and race has a very checkered past,” she said. “Seven first ladies, starting with Martha Washington, brought their enslaved servants to the Executive Mansion.”

Michelle Obama referenced these chapters in stark terms when she stated at the Democratic National Convention in 2016, “I wake up every morning in a house that was built by slaves.”

But in the 20th century and beyond, first ladies have been more supportive of advances in civil and social rights, sometimes at considerable personal risk. McBride describes the groundbreaking 1964 whistle-stop campaign through southern states by Lady Bird Johnson in support of the landmark Civil Rights Act.

“The conditions for Lady Bird’s trip were extremely dangerous,” McBride said. “It was considered unsafe for Lyndon Johnson to go to the South, yet Lady Bird demonstrated courage and maintained a calm demeanor as she made her points at every speech along the way.”

The profiles in courage continued:

-Barbara Bush’s 1989 visit to a Washington, D.C., home for abandoned babies and children with HIV/AIDS.

-Laura Bush’s advocacy for education as a civil right for every child.

-Hillary Rodham Clinton’s declaration at the 1995 United Nations Conference on Women in Beijing that “women’s rights are human rights” – one of four speeches by first ladies, along with two by Eleanor Roosevelt urging UN passage of the Universal Declaration of Human Rights and Barbara Bush’s 1990 Wellesley College Commencement Address, deemed by American Rhetoric scholars as among the top 100 political speeches of the 20th century.

McBride also outlined the organization, First Ladies Association for Research and Education (FLARE), which she co-founded. The group encourages collaboration among scholars, biographers, journalists, first ladies’ staff, historians, and others interested in research and education about U.S. first ladies.

“The stories of these first ladies are numerous,” she said, “and they deserve to be told.”

That view was seconded by Keuka College students in attendance.

“It’s really important to recognize the activism of some first ladies,” said Pablo Mendoza ’25, “especially in pushing the agenda for human rights.”

Elizabeth Sisson ’24 said she was impressed by the scope of McBride’s presentation.

“It was interesting,” she said. “I didn’t know that much information about first ladies – and I saw that she worked with one of them; that’s pretty awesome.”

The Carl and Fanny Fribolin Lecture Series is named after the late Geneva residents Carl Fribolin and his wife, Fanny. Carl was an emeritus member of the College’s Board of Trustees and recipient of an honorary Doctor of Humane Letters degree in 2004.