Building More than a House 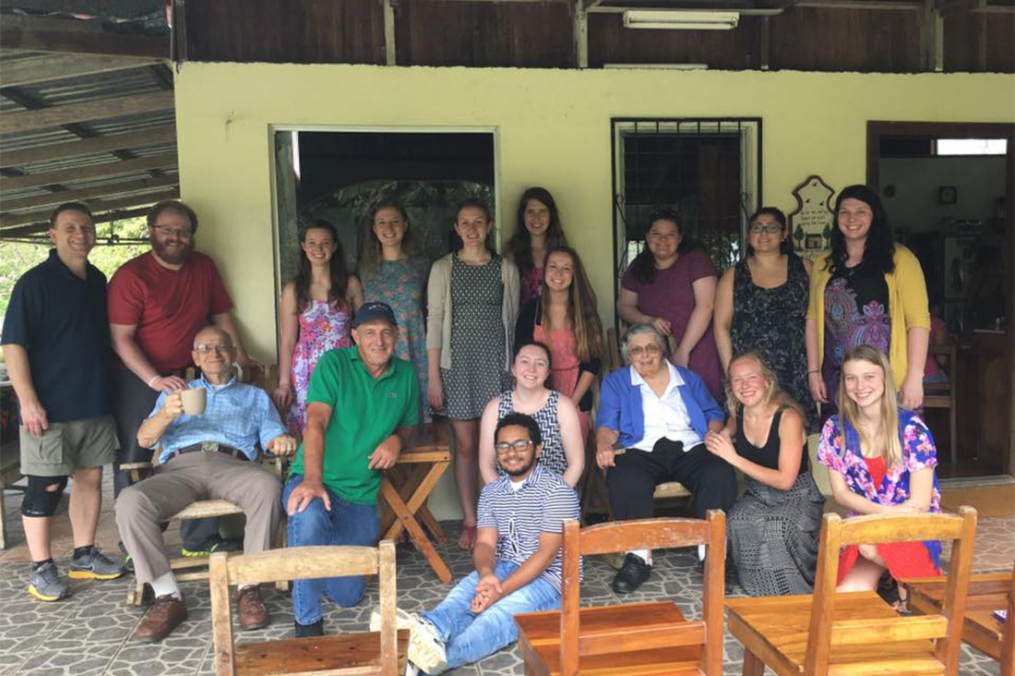 For a dozen Keuka College students, spring break meant digging holes, hand-mixing concrete, and installing concrete slabs as part of building a home. It also meant creating permanent bonds with each other—and those they met along the way.

More than Just a House
Hosted by Mary Curtiss Miller ’49, and her husband Ralph, the students spent a week in Costa Rica, providing the labor needed to help ensure a pastor and his family have a home.

“It was definitely the most demanding work experience we’ve ever had,” says Eric, who has led eight Alternative Spring Break trips. “We dug 39 holes, 39 inches deep, with a 14-16 inch diameter—some larger—through clay. We lifted 12-foot, 4x4 concrete posts that were put into the holes, with hand mixed cement.”

“We installed concrete slabs that went between the posts, which easily weighed a couple hundred pounds each,” adds Eric. “We did all this by hand, and with hand tools. The house now has its exterior as well as some interior walls up. It was a huge accomplishment.”

But the students didn’t mind the hard work—in fact, they embraced it.

“While working on the house for the pastor, I was able to spend a lot of time with his son, David,” says Jen Cottet ’18. “We came to build this young man and his family a house, and he worked right along with us. Every morning, he showed up ready to work and ended the day with us, just as exhausted as we were. He took time off from his studies at the university to make his parents’ dreams of this house a reality. His mother, too, was at the construction site every day, ready to get us water, clean out cuts, or just love us.” 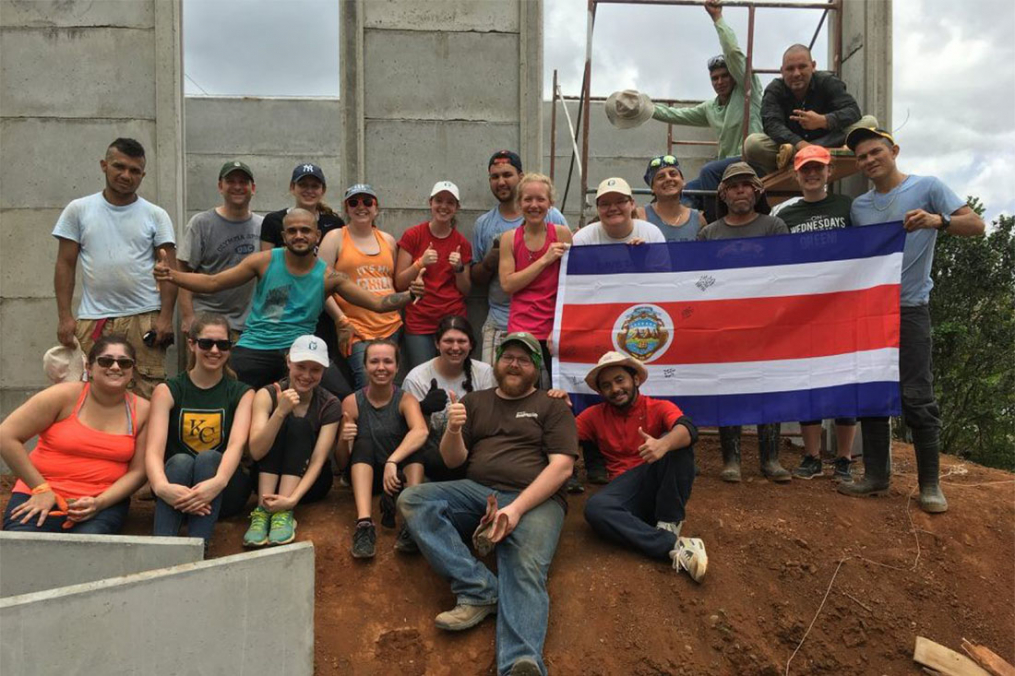 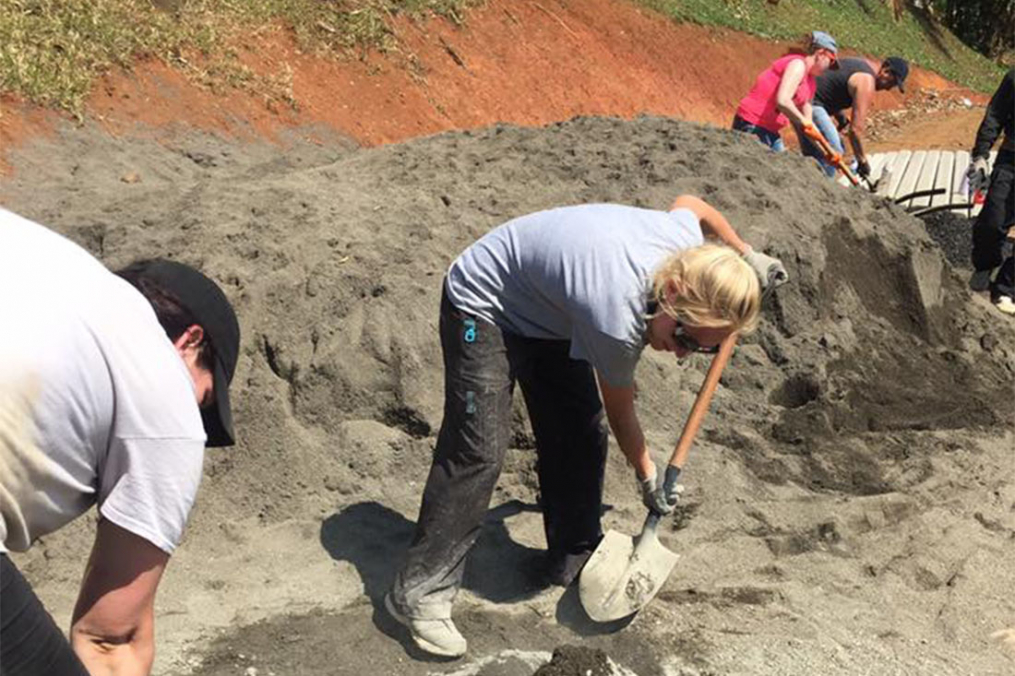 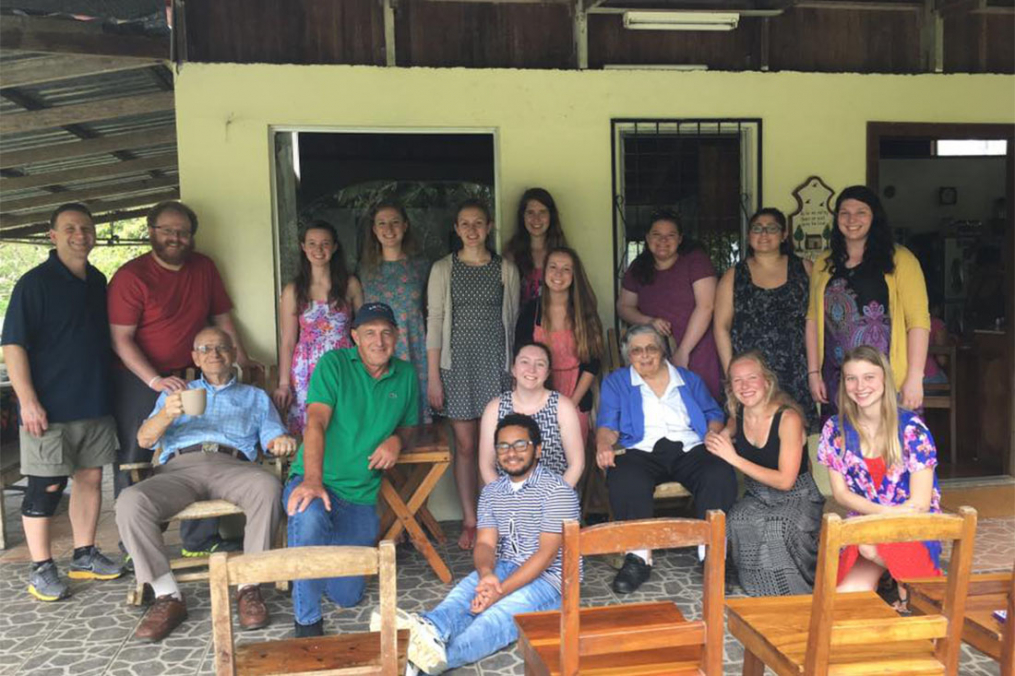 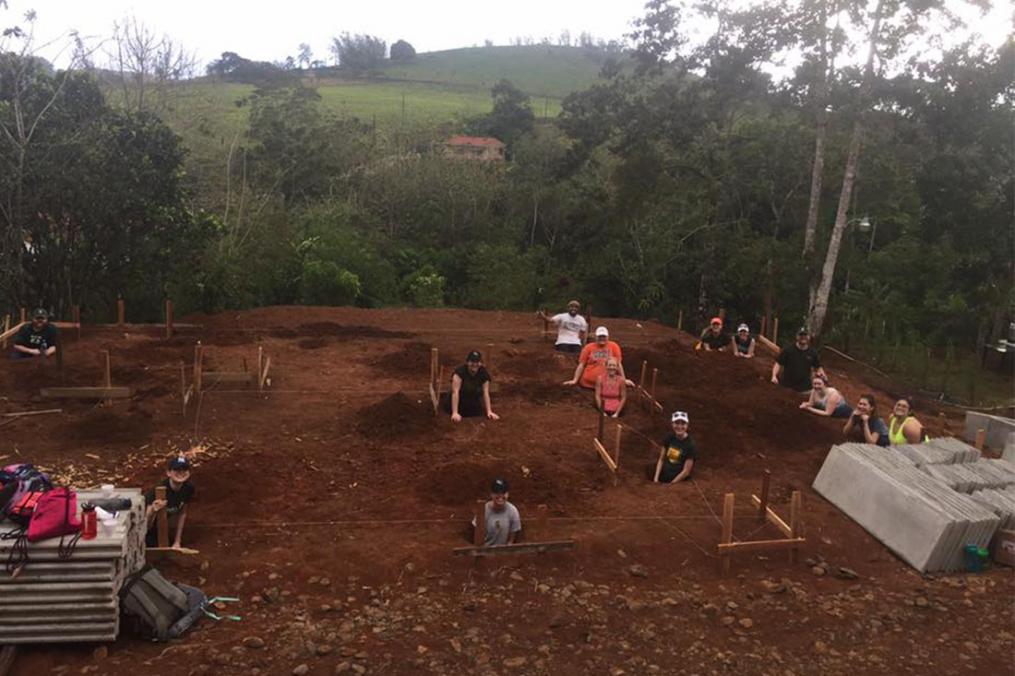 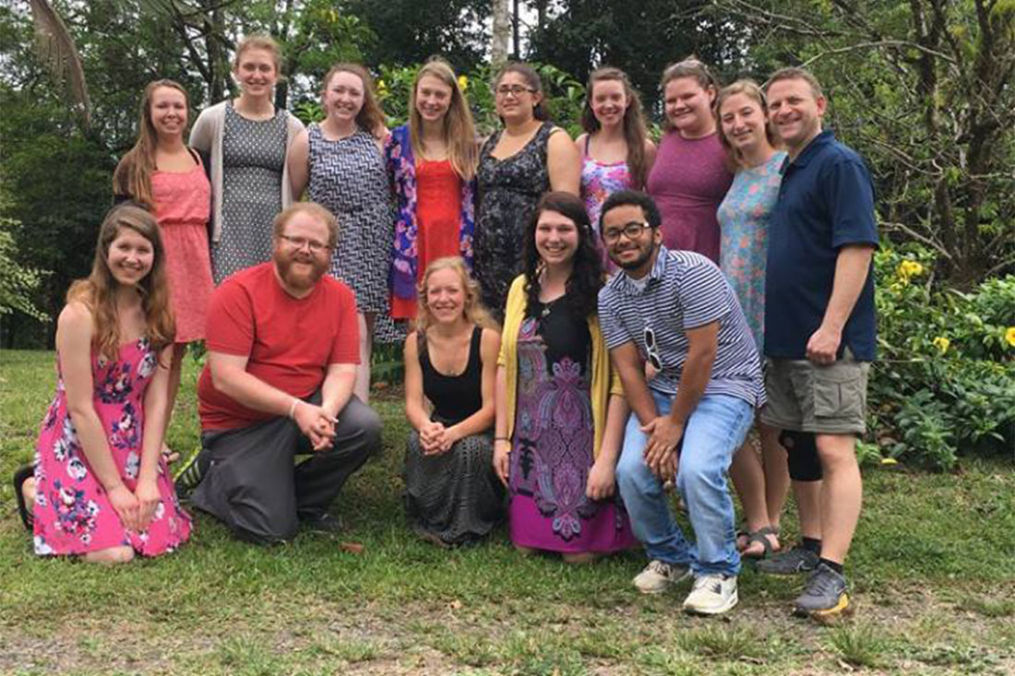 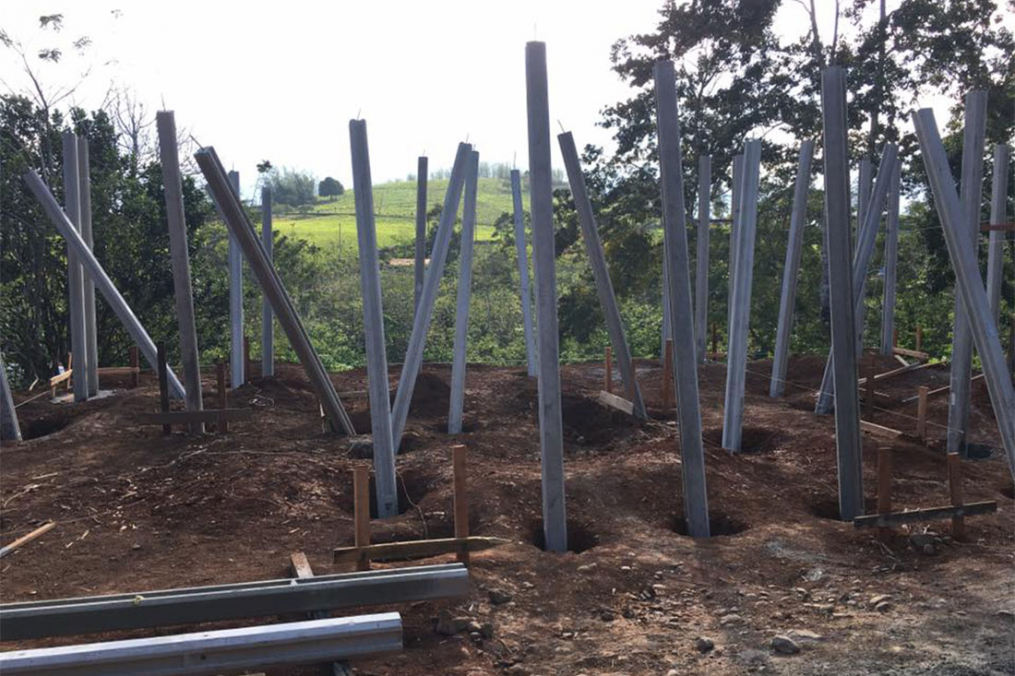 Life Lessons
When not working on the house, the students had a chance to get to know Mary and Ralph.

Samy Hamdan ’19 taught Ralph about his religion—Islam. It was a big change for Ralph, Samy says, as all Ralph knew about Islam was from various media outlets, which led him to believe ‘Muslim people kill others who don’t believe in Islam.’

“I told him that whatever he sees in the news is wrong,” says Samy. “Ralph was so open minded to everything I told him, and in fact, I was the first Saudi and the first Muslim that he had met. It meant a lot to him to hear what I said, and I was proud to teach him something about my country and religion.”

In turn, Samy says he learned from Ralph, too.

“I asked him ‘what did you learn from your life?’” adds Samy. “What is your first lesson for me? Ralph leaned forward and said ‘love is my first lesson for you.’ The rest of the conversation will be kept until I live long enough, like this great man.”

And Jen was able to hear stories about the College from Mary, and the group sang the College’s alma mater together.

“It was so special to get to know Mary and Ralph, going to their house, and sharing a few meals with them,” she says. “Mary told us about her life, and her experiences at Keuka College.”

On another day, the group was able to spend some time with men in a rehabilitation program for addiction. Megan Geariety ’18 says she listened to their stories, and shared our stories with them without any fear of judgment from either side.

“Life is too short to spend time doing anything other than what makes you happy,” she says. “Everything that you do in life should really be done with your whole heart, and that is something that was portrayed by every person we met while in Costa Rica. If there is one thing that I learned it is that life is about doing what you love. ”

“We also visited a boys’ home, and brought a variety of sports balls that we played with the boys,” she adds. The group also gave the boys candy and books.

From the boys, Samy says he “learned to always be thankful for what you have, and always give and help other as much as possible.”

Jen says she learned to “let go and let God.”

“He has a plan that is so much bigger than anything I may have planned, and I need to let God lead the way because if I do, it will be the best life I can live,” she says. “I also learned that people are all we need in our life, and that we need to give each other our time.”

Refocusing on What’s Important
Alayna Murphy ’18, participated in last year’s Alternative Spring Break trip to Cincinnati, Ohio, where each day, she says the group was given a new word to think about, and find the meaning of service through that word.

“By repeating the same words this year, it made it seem as though I wouldn’t gain anything new,” she says. “For the first several days, I felt disconnected and really confused as to why I was called to go on this trip. It was one of the last days when we tackled the word ‘motive.’ Motive reflected the why we do what we do. This was the question I had been asking myself, and was hopeful that maybe an answer would come to me.”

Oddly enough, Alyana says, her answer came the day the group was on a ziplining trip.

“The thought of getting away from the worksite really excited me—not because I didn’t want to work, but because I saw it as a chance to clear my head,” she says. “While zip lining through the rainforest, I was brought to a new level of peace. It was just me on the zip line, alone with my thoughts. It actually got a little lonely, and I felt a bit disconnected. I realized I missed the interactions. I missed attempting to speak Spanish. I missed seeing the work-site and all the progress we had made.”

It was in that short time when Alayna realized her motive for going on the trip.

“My outlook on the trip changed in that moment, and I felt more dedicated to what I was doing,” she says. “I was there for the socialization, and inner feeling of wanting to help, and wanting to do good.”

Carolyn Spitzer ’18, who also attended the Cincinnati, Ohio trip, knew her purpose didn’t lie in “sitting around for spring break.”

“I knew I could better use my time helping others,” she says. “With this trip to Costa Rica, I know it would be so much more than volunteering. This once-in-a-lifetime trip would also be an incredibly immersive cultural experience. I went in knowing little-to-no Spanish, and by the end of the trip, I was able to learn a lot of new words.”

And like most of the students who traveled to Costa Rica, Megan believes she has been changed because of her experience.

“It is amazing to me, looking back, how pure everything is in Costa Rica,” she says. “Life is less about getting to where you have to go. There is more of an importance and focus on enjoying the journey that gets you there. Every second is a chance for me to give to others and learn from them. I think that this is something that I will keep with me always.”

Going on this trip changed Jen, too.

“My heart will never be able to forget my new extended family in Costa Rica,” she says. “Their hearts are so open, their love for people is unimaginable, and the willingness of the people in Costa Rica changed me. I want to be more like them, and will strive to be that way the rest of my life.”

Forging Family Ties
“Going into the trip our group was essentially a group of strangers,” says Carolyn. “It was amazing to see how in a matter of a few days we formed close bonds and did anything we could to support one another. I will always remember how it feels to be unconditionally loved and cared about by people that I had only known for a short amount of time.”

When asked about the trip, Megan says the first thing she will remember are the bonds that were formed from this trip.

“The fourteen of us that went honestly became a family,” she says. “We all helped to create a welcoming and safe environment, which helped us open up to one another, and become close quickly.”

And for Jen, forming relationships with people she didn’t know was one of the “most special things I was able to do. These people feel like family now.”

“There was nothing short of pure joy on the faces and hearts of the team that went to Costa Rica,” she adds, “and that is because we gave each other the time that each of us deserve. I love this group so much, I truly call them my family now.”

“It’s hard to put into words what we saw, felt, and did, but I am so grateful for an amazing experience in Costa Rica with such an incredible group of people,” says Eric. “We built a house, memories, and relationships that will endure.”