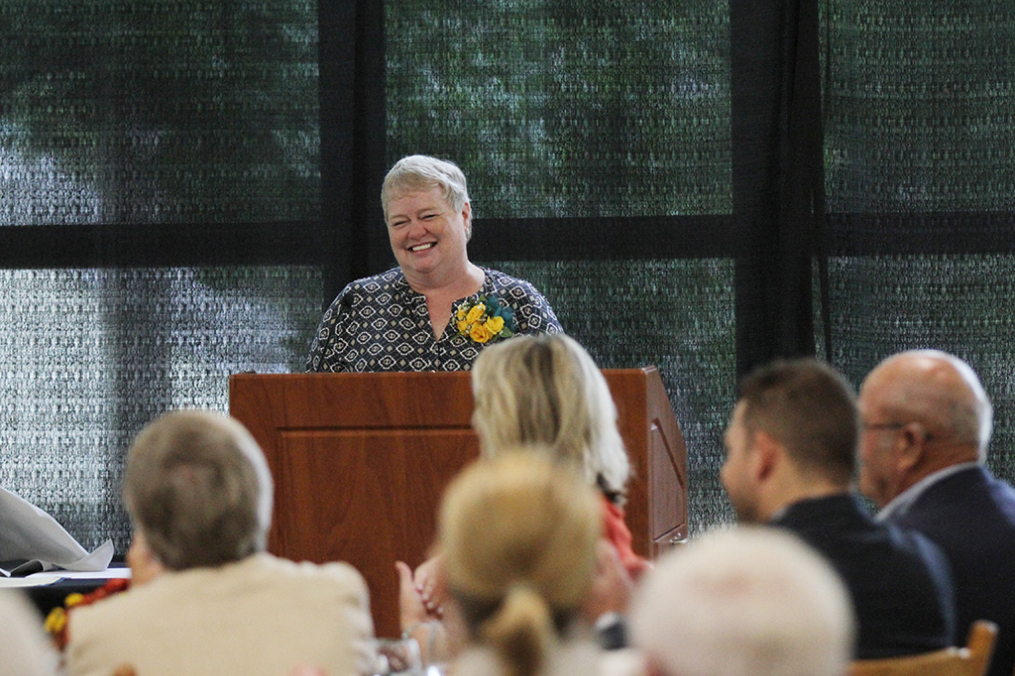 One of the most recognizable names on the Keuka College campus is that of Kathy Waye. In demand for her knowledge and passion for the College, she has served—or currently serves—on nearly every College committee.

Kathy, who serves as the College’s Director of Community Relations and Events, is an enthusiastic supporter of Wolves athletics, a consistent and faithful donor to the College, and always the first to volunteer at any event. From lending her time and talents to leading the planning for such events as Commencement, Celebrate Service…Celebrate Yates (CSCY), and Green & Gold Celebration Weekend, Kathy’s support for the College runs deep. In addition to serving on committees across campus, Kathy also oversees the Community Service Advocates, a group of students with a passion for social responsibility.

From being named College’s Staff Member of the Year for 2015, to receiving the inaugural Keuka Heart Award in 2009, to being named an honorary Keuka College alumnae, Kathy’s dedication has been widely recognized from organizations across campus. In addition, in appreciation of Kathy’s service to her native Penn Yan, she was the recipient of the 2018 Stork Award.

And Kathy’s dedication and loyalty to Keuka College has no doubt inspired others, while Kathy says all of the women at Keuka College inspire her.

“They are willing to take leadership roles and don’t take ‘no’ for an answer,” Kathy says. “They know they can achieve anything they set their minds to, and I am always amazed by their stories. I like the narratives they tell, and they lead incredible lives. They are trailblazers, leaders, role models, and mentors. I am so grateful to know many of these Keuka College women.”

“Thelma Flynn was my inspiration to continue to obtain my MSW. I worked as a medical social worker in Boston, Mass., and in Palm Springs, Calif., until my retirement. I have Mrs. Flynn to thank for all of those fulfilling years.”

Keuka College’s signature Field Period® program might not have come into existence were it not for the vigor and vision of Edith Estey. A 1933 Keuka College graduate and an “efficient and loyal administrator,” writes Dr. Philip Africa in his “Keuka College: A History,” she created the student-designed experiential-learning initiative that began in 1942. No other college or university in the country had anything like what became a required 140 hours-per-year internship.

“Under the effective and enthusiastic leadership of (future College President) Katherine Blyley … and Edith Estey,” Dr. Africa wrote, “the field period became an integral part of the life of the college.”

The program, which provides learning opportunities across the country and around the world, continues as such today. And Edith Estey continues to influence experiential learning at the College, via the Edith Louise Estey ’33 Memorial Field Period Scholarship. Edith received an honorary Doctor of Humane Letters in 1993.