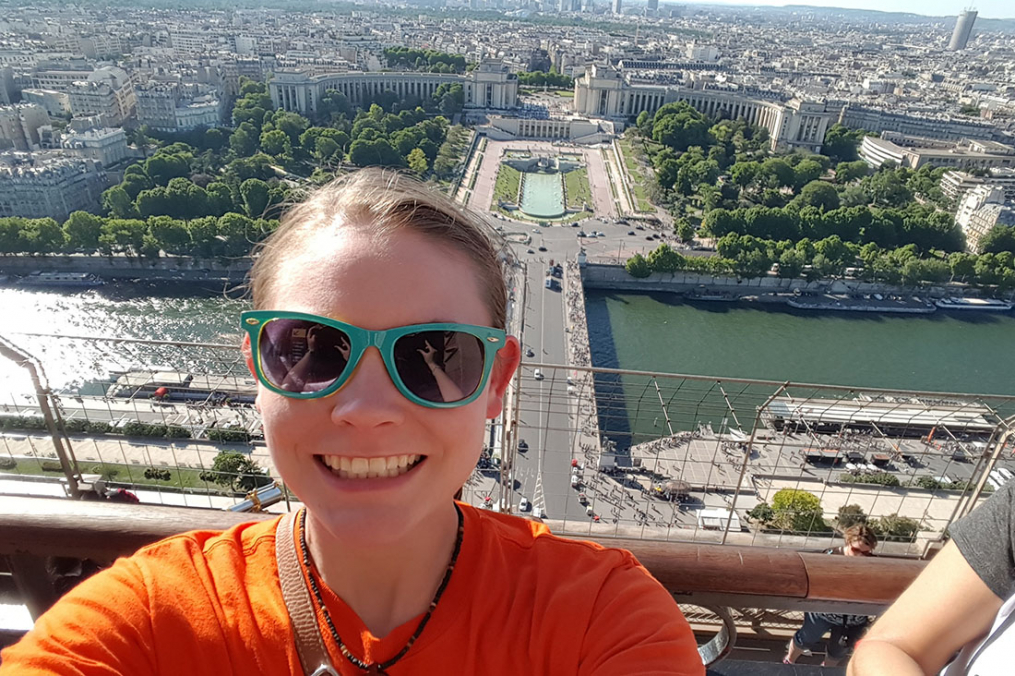 Arguably, Paris, France, is a place that many people dream of visiting—a definite on many a bucket list.

And for Keuka College senior Chelsea Cooper, taking a trip to the City of Lights was near the top of that list.

“I have always dreamed of going to Paris, seeing the Eiffel Tower, touring famous art museums, and sitting outside a small cafe drinking some type of espresso, just like in the movies,” says Chelsea, an American Sign Language (ASL) major, who received a Judith Oliver Brown Memorial Scholarship. The award honors the 1963 Keuka College graduate, and is designed to assist students planning to pursue culturally oriented Field Period® experiences.

When given the opportunity to not only tour Paris, just as she had dreamed, but also to learn a different language and experience a different culture, Chelsea jumped. She used her Field Period® opportunity to study abroad with the University of Rochester’s ASL Program. The two-week program gives ASL users an opportunity to learn French Sign Language (LSF) and French Deaf culture in a formal setting, which furthers their understanding of the international Deaf world.

“ASL is not a universal language, like most people think,” she says, “as ASL originated from LSF.”

In fact, about 58 percent of signs in modern ASL are similar to Old French Sign Language signs, which Chelsea discovered. Old French Sign Language is the language of the Deaf community in 18th Century Paris at the time of the establishment of the first Deaf schools. The first, Institut National de Jeunes Sourds de Paris or the National Institute for Deaf Children of Paris, was founded by Charles-Michel de l'Épée in 1760.

“Both languages have some similarities, but not many,” says Chelsea. “For example, the signing order (topic, comment, question) uses most hand-shapes of the signed alphabet. They also share the idea of initializing meanings. In ASL, we sign Monday with a ‘M’ hand-shape. In French, Monday is ‘Lundi,’ and is signed with an ‘L’ hand-shape.”

ASL became prominent in the United States in the 1800s thanks to Thomas Hopkins Gallaudet. He wanted to help his neighbor’s Deaf daughter, so he travelled to Europe and studied ways to communicate with deaf people. From there, he met Laurent Clerc, who was Deaf, and who attended the famous school for the Deaf in Paris.

“Going to France and being thrown into the Deaf community caused me to practice and build my signing skills even more,” adds Chelsea. “Learning another form of sign language is a great way of understanding the differences in the language.”

Learning an additional form of sign language is important to Chelsea, because she knows she could expand her skill set, and gain a different perspective of the Deaf world.

For example, Chelsea works with hard of hearing students at Oswego County’s Center for Instruction, Technology, and Innovation (CiTi) BOCES, and she looks forward to teaching these students an additional form of sign language.

The program also allowed for travel around Paris, and Chelsea was able to take guided tours of culturally significant sights such as renowned museums, Deaf theater, the city of Lyon, Deaf schools, and towns and villages.

“What will stick with me the most is seeing the city from the top of the Eiffel Tower,” says Chelsea. “I also won’t forget the art museums I explored. I loved seeing art pieces that I learned in my art history class in real life. They are huge, and breathtaking.”

“Going to Paris for Field Period® allowed me to gain new perspectives and step out of my comfort zone,” Chelsea adds. “And that feeling—especially when I stood in the courtyard of the very first school for the Deaf that started it all—was worth more than I can describe.”