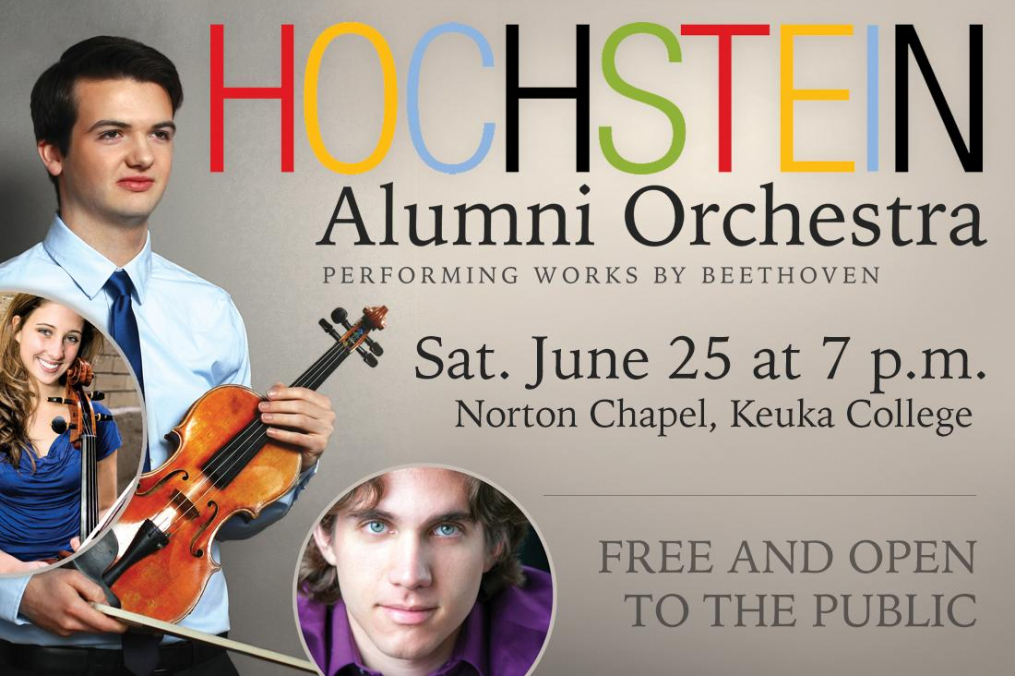 Penn Yan native Dylan Kennedy returns to his hometown for a June 25 concert featuring members of the Hochstein Alumni Orchestra (HAO). The HAO is a reunion orchestra composed of musicians who received musical training at the Hochstein School of Music and Dance.

Part of the HAO 2016 Summer Tour, the concert begins at 7 p.m. in Keuka College’s Norton Chapel. Free and open to the public, donations to benefit the Hochstein School of Music and Dance will be accepted. The school provides the community with excellent music and dance education in an environment that nurtures and encourages personal achievement.

In a showcase of exceptional talent that has been strengthened through Hochstein, Kennedy, who plays violin, will be one of three award-winning featured soloists during the performance. He will be joined by Annie Jacobs-Perkins (cello), and Benjamin Hopkins (piano), for the all-Beethoven program, which features Beethoven’s Triple Concerto for violin, cello, and piano.

As a violinist, Meccarello was a two-time winner of Nazareth College’s concerto competition, and has participated in summer festivals held around the western New York region, as well as in Tanglewood and Spoleto, Italy. As a chamber musician, he has played with the Delmonico String Quartet for seven years.

Kennedy, who earned a bachelor’s degree from Cleveland Institute of Music, studied at the Eastman School of Music and graduated from Hochstein’s honors certificate program in piano. He began studying at Hochstein when he was in 4th grade, and has played in Philharmonia, the Hochstein Youth Symphony Orchestra, the Virtuosi Scholarship Chamber Orchestra, as well as an honors string quartet. He received an Albright Award at the Rochester Philharmonic League Young Artist Competition, the David Hochstein Recital Competition, and has performed live on WXXI’s ‘Live from Hochstein.’ He also serves as concertmaster of the Hochstein Alumni Orchestra.

Kennedy has appeared as a soloist with the Cleveland Institute of Music (CIM) Orchestra, Orchestra of the Southern Finger Lakes, Penfield Symphony Orchestra, Hochstein Youth Symphony Orchestra, and Finger Lakes Symphony Orchestra. Kennedy is the first violinist of the Zeitlin String Quartet, as well as the Cavani String Quartet, which received Honorable Mention in the Darius Milhaud competition. He has attended and performed at several summer music festivals, including the Sarasota Music Festival, National Arts Centre of Ottawa Young Artists’ Program, Music Academy of the West, and the Meadowmount School of Music.

Jacobs-Perkins, who is pursing a bachelor’s degree at the University of Southern California, was the winner of the Jo Amish Concerto Competition, the Doreen B. Hertzog Concerto Competition, and the Genesee Symphony Orchestra Concerto Competition. She has attended the Heifetz International Music Institute and the Interlochen Arts Camp. She performs as principal cellist of the Rochester Philharmonic Youth Orchestra, and has appeared on NPR’s From the Top.

Since winning first prize in the 2007 edition of the Thousand Islands International Piano Competition, Hopkins has won numerous local, national, and international awards, and has performed across North America and Europe. He made his debut with the Rochester Philharmonic Orchestra in 2008, received first prize at the David Hochstein Recital Competition, earned a Howard Hanson Award, and was a finalist in the first Pittsburgh Symphony Concerto Competition.

Five years later, he was nominated for the American Pianists Association Classical Fellowship Award, received first prize in the Rio Hondo Symphony Young Artist Competition, and made his New York City debut at Liederkranz Hall. He has performed Beethoven’s Piano Concerto No. 3 with orchestras in California and Valencia, Spain, and performs frequently as a collaborator in the Los Angeles area. Hopkins earned both a bachelor’s and master’s degree from the University of Southern California’s Thornton School of Music, where he was named Keyboard Department Outstanding Undergraduate.

In addition to works of standard repertory, the Hochstein Alumni Orchestra has presented three world premiere compositions by alumni as well as featured alumni soloists from around western New York.