The Center will act as a hub for all alumni events and truly embody the Keuka College spirit. 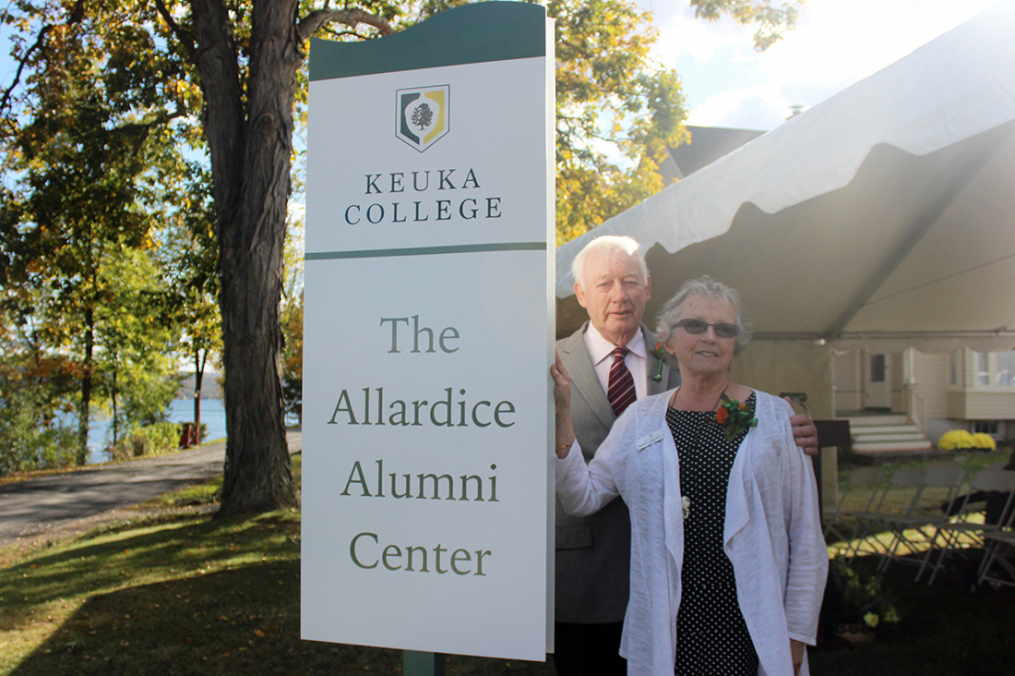 With this gift, the Allardices envision the center becoming the hub for all alumni events. Specifically, they want to make sure the Center facilitates the transfer of the Keuka College spirit from generation to generation by bringing alumni together in a place they can call their own.

“It gives me great pleasure to be at the Allardice Alumni Center, as it will ensure long-standing relationships between Keuka College and its alumni,” said College President Jorge Díaz-Herrera, who called the Center one of the most elegant buildings on the College’s campus.

Additionally, funds will be available for professional development opportunities and travel, programming for alumni, and assure the Center always has the best tools, technology, and software available.

“Barbara and David hope that their gift will leave a legacy that communicates how much they love and care about Keuka College, and that others will see this contribution and consider ways they can leave a legacy, large or small, that promotes something they love,” said Amy Storey, vice president for advancement and external affairs.

And one thing Barbara and David love are the relationships they have formed, not only with the alumni of Keuka College, but the staff, faculty, and students as well.

“The Allardice Alumni Center provides the perfect setting to continue these extraordinary relationships Barbara and David have invested in so significantly,” said President Díaz-Herrera. “In part, this is due to their extensive history and strong relationship with the College that spans decades. In fact, Barbara and David have been giving to the College for 28 consecutive years.”

In addition, Barbara and David contribute to the Keuka Fund, have endowed numerous scholarships, and are members of the Keuka College Leadership Circle. The couple has also given to the Katharine F. Wilhelm ’67 Scholarship, the Division of Natural Sciences and Mathematics, the Student Alumni Association, the Adopt-a-Student Program, the Keuka College Golf Classic, and funded a music series on campus. They have also been consistent donors to David’s alma mater, Bryant College.

Barbara’s connection with the College also includes representing her fellow alumni on the Presidential Search Committee, the Alumni Executive Council, a Board of Trustees member, and serving on the cabinet for theCampaign to Save Ball Hall, among other involvements.

Both Barbara and David have held professional positions with Keuka College. Barbara served as director of student programs from 1965-1973, while David advanced the College’s mission as an assistant, and later associate, director of development.

“David and Barbara are among the rare individuals who consistently invest in the special things that bring people together,” said President Díaz-Herrera. “I thank them for their thoughtfulness, their gift, and their enduring loyalty to the Keuka College community.”