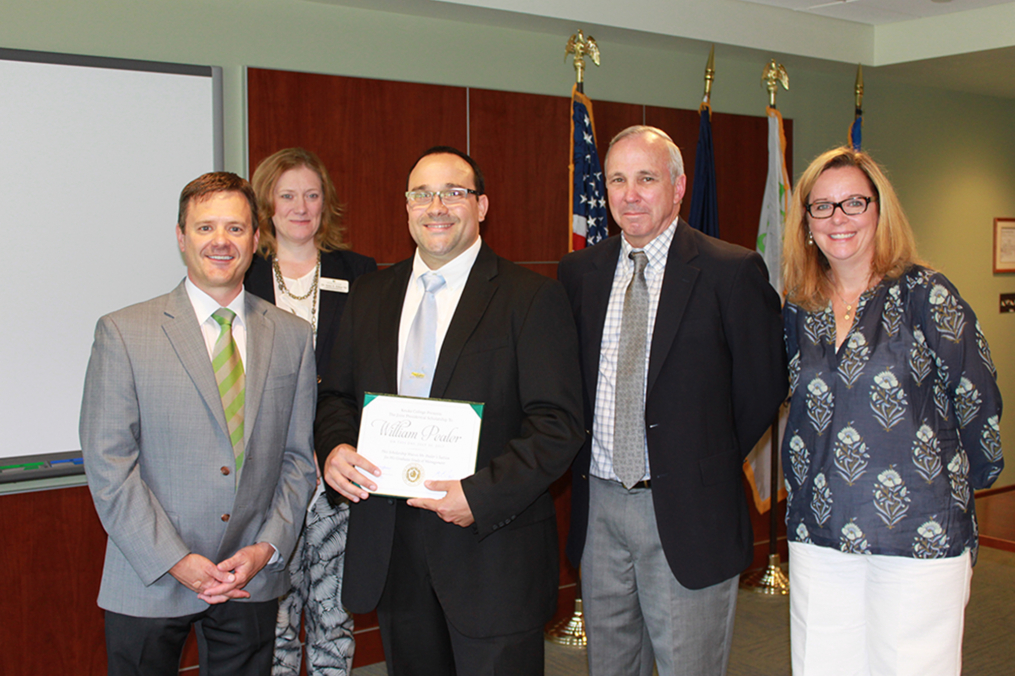 William Pealer, media production specialist at FLCC, center, received the Keuka College-FLCC Joint Presidential Scholarship to pursue a master’s degree. He is shown with, from left, Tim Sellers, associate provost for academic innovation at Keuka; Anne Killen, associate vice president of the center for professional studies at Keuka; and, to the right of Pealer, FLCC President Robert K. Nye, and Kim Morgan, assistant director of admissions at Keuka.

The scholarship gives an FLCC employee the opportunity to attend a Keuka College bachelor’s or master’s degree program tuition-free. When one employee completes the major requirements of the program cohort, another can apply. The most recent recipient to complete a degree is Johnathan Murray ’05, assistant director of the One Stop Center. Other past recipients include Jon Van Blargan '95, financial aid counselor, Lynn Freid '08, former director of workforce development, and Mike Fisher, director of the One Stop.

Pealer plans to get a master’s degree in management through the Keuka College Accelerated Studies for Adults Program (ASAP). At a recognition ceremony Friday, June 30, Pealer thanked his supporters and FLCC. “It really is quite an opportunity to have an employer who is willing to commit to your future and your goals,” he said. “It’s humbling.”

FLCC President Robert K. Nye told Pealer he was selected from a pool of several well-qualified candidates. “This is an opportunity and an honor for you,” he said, and then nodded toward Pealer’s wife, Jaclyn ’05, and their three young children, William, Eliana and Luke. “You’re going to get busy. You can’t do it without these folks right here. Make sure you maintain a balance.”

Pealer got his start at FLCC in 2009 as a media production specialist. In addition to his full-time position, he also works as an adjunct faculty member, teaching Beginning Fencing. He serves as the advisor to the student fencing club, which, for the past four years, has advanced to regional tournaments.

Pealer earned his bachelor of fine arts degree in film and animation from Rochester Institute of Technology in 2000. He has worked as a video production specialist for Edelman Public Relations in New York City and as a post-production technician for Lifetime Television. He helped produce the first music video for the alternative/pop band that got its start in Geneva, Gym Class Heroes.