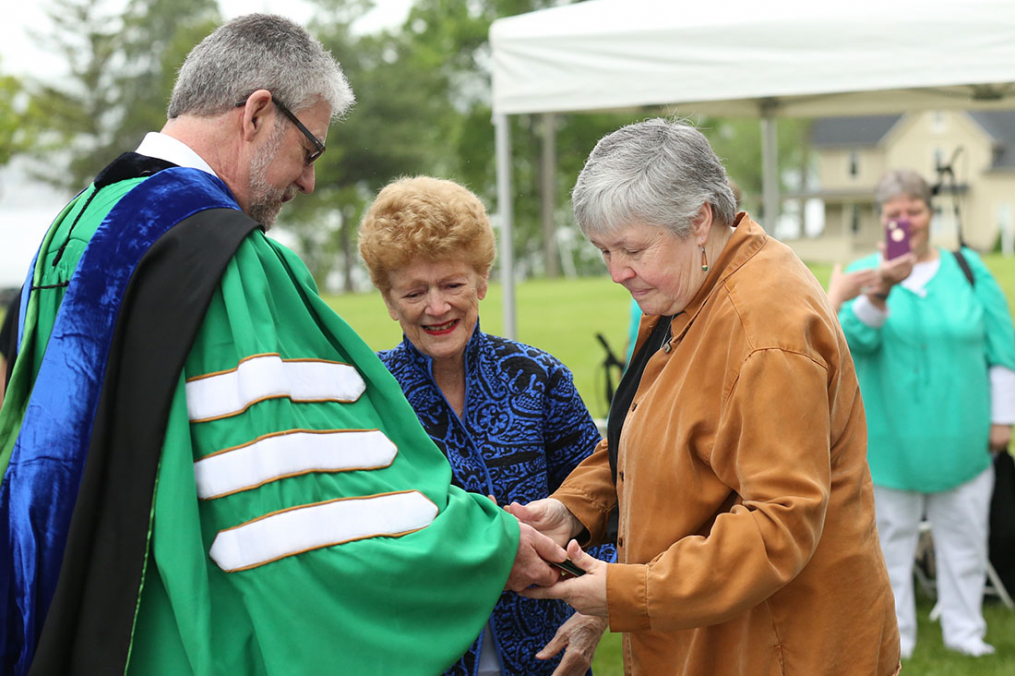 Keuka College’s Adjunct Instructor of the Year Award is granted each year at Commencement in recognition of the significant additions adjuncts make to the mission of the College. The award is given to those who make outstanding, and vital, contributions to the goals of placing students at the center, and achieving academic excellence in teaching effectiveness and student learning.

And Jo Ann Morse-Clough LCSW-R, is no exception. Named Keuka College’s Adjunct Instructor of the Year, there was a special guest on hand to watch her receive her award—her aunt, Betty Miller Roren, a member of the Keuka College Class of 1945.

Jo Ann was the first part-time adjunct instructor and cohort advisor hired for the College’s Accelerated Studies for Adults Program (ASAP) social work program a decade ago. Since joining the Division of Social Work in 2007, Jo Ann has taught more than 24 courses in the Corning and more recently, Dansville regions.

“She has strengths in many areas, including teaching, advising, guiding, and connecting students with field instructors,” says Stephanie Craig, professor of social work, who nominated JoAnn for the award. “As an advisor, she meets with students and field instructors during the practicum experience, maintains close connection, and provides individual and group guidance to the students in the cohorts. She is an exemplary instructor who offers opportunity for students to learn about the profession of social work—and how to become future social workers—through challenging classroom activities, professional guest speakers, and myriad of out-of-classroom experiences.”

Stephanie says she can “always” count on Jo Ann to provide support to other adjuncts.

“She has demonstrated consistent giving and sharing of knowledge as she assisted new advisors and adjuncts as each developed their own skills,” says Stephanie. “If you question anyone who has worked closely with Jo Ann, you would get a resounding, ‘she's wonderful.’ She cares about people, and her Keuka College social work colleagues are no different.”

Stephanie estimates that a large percentage of the social work students Jo Ann taught and advised went on to earn master’s degrees from prestigious universities. And many hold positions in the agencies in which they completed their practicum placements, or are in leadership positions.

“I have co-taught with Jo Ann, and her commitment to student learning is commendable,” adds Stephanie. “She brings challenging cases to the classroom, and those students would contend that Jo Ann had a significant impact on their Keuka College experience.”

For example, Stephanie shares some student feedback, including one student who said Jo Ann “is a caring and compassionate individual who portrays what social work is all about. She’s an asset to Keuka College, and is beloved by her students.”

Another student adds, “Jo Ann was amazing, welcoming, and understanding. She was knowledgeable and engaged us well in class. She pushed us to our full capability, and taught us a lot.”

A third student acknowledged the tough workload, but believed the work was worth it.

“There was a lot of work, however it was meaningful and valuable,” the student says. “Jo Ann spent a lot of time preparing for the course and made it amazing. Her love and passion clearly showed through.”

In addition to teaching and advising for Keuka College, Stephanie says Jo Ann has a long-held and thriving private practice in Corning, where she provides clinical counseling services. She has worked for The Sol Stone Eating Disorder Clinic, Corning Hospital, and the Steuben County Department of Social Services, among others, in her more than 35-year career.

“Jo Ann is also a strong advocate for children and families locally and afar,” says Stephanie. “She is the co-founder of Heart to Heart of the Southern Tier Inc.; a not-for profit organization which offers holiday and back-to-school assistance to children who would not have it otherwise. Established nearly 20 years ago, Heart to Heart now serves more than 4,300 children across the Southern Tier of New York state and the Northern Tier of Pennsylvania.”

Jo Ann has always been committed to serving the children, adds Stephanie, who says it is safe to say that Heart to Heart would not exist without Jo Ann’s dedication to local families and believing that all children deserve to feel normal and special.

In addition to her work with Heart to Heart, Jo Ann is also the co-chair of the Sponsorship Committee for the Bon Foundation. Bon is the indigenous religion of Tibet and the foundation began in 1989 as a way to support refugees from the Bon community who had fled Tibet during that country’s civil uprising.