Dr. Janine Bower urges all Keukonians to work together to make a difference. 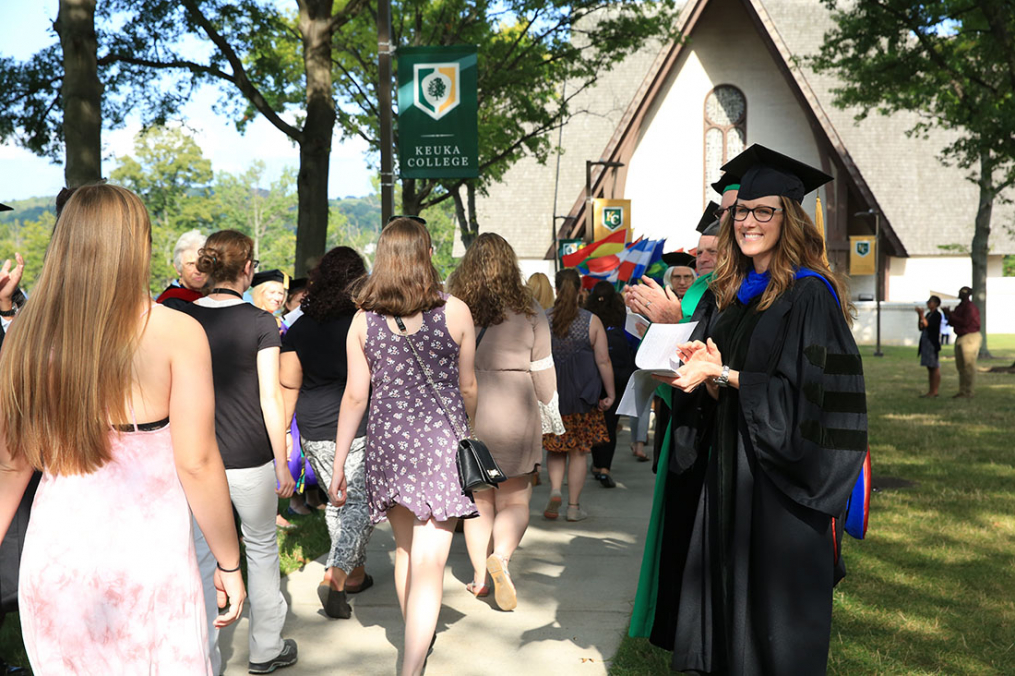 Associate Professor of Criminology/Criminal Justice Dr. Janine Bower credits her success at Keuka College to the support and encouragement from many members of the College’s faculty, staff, and administration.

“For me, it is a tremendous honor to be recognized by my peers and to be placed in such a distinguished group of past honorees, all who have made a world of difference at this institution and in their communities,” says Dr. Bower. “It is also quite humbling.”

Named the Professor of the Year during the College’s Commencement Ceremony, Dr. Bower says she’s had time to reflect on those relationships that have been integral to her development as a person, and a professional.

Dr. Bower says college campuses are places that offer many opportunities to broaden our social networks, and have meaningful connections with people from different backgrounds or parts of the community.

“Here at Keuka College, this is certainly the case,” she says. “I have had the privilege of forging relationships with students of such incredible character and fortitude, whose generosity and willingness to share with me aspects of their cultures, faith, personal histories and challenges have made me a better mentor, sociologist, and person.”

Dr. Bower shared that when she was in college at Indiana University-Perdue University at Fort Wayne (IPFW), her professors—including her mentor Dr. Peter Iadicola, professor of sociology and chair of the Department of Sociology at IPFW—saw her potential to not only be personally successful, but also make a meaningful, positive difference in her field.

“Dr. Iadicola undoubtedly played a crucial role in helping me to envision the path that led me here, to this very place,” Dr. Bower says. “He convinced me that I was capable of this achievement, and challenged me to act. As a professor, adviser, and mentor, this is the kind of contribution I aspire to make to the lives of my students.”

Dr. Bower says she has benefited tremendously from her relationships with others.

“The wisdom, support, and encouragement of my family, colleagues, friends, and mentors ahve helped me make a positive difference in the lives of others and in my community,” says Dr. Bower. “I encourage you to build connections with others across this learning community. Be open to questioning your own ideas, learning from others, and seeking out other points of view—both in and outside of the classroom.”

Dr. Bower also encouraged Keukonians to be generous with their support of others as they work toward their goals.

“Their goals will likely benefit us all,” she says. “As a person, you can make a difference. And working together, we can make an even greater difference in this world.”

Academic Convocation marked the official opening of the 2017-18 academic year and College President Dr. Jorge L. Díaz-Herrera and Alan Ziegler, chair of the Board of Trustees, helped welcome new students to campus.

Alan reminded students that when it comes to receiving advice, one of the challenges is to separate the wheat from the chaff.

“And don’t forget that there will always be a kernel of wheat in that chaff,” says Alan. “It certainly won’t be the same kernel for all of you, and what is wheat to one of you will be chaff to another. But in your path to becoming discerning learners, you will need to learn how to find those kernels. You will need to read more deeply, listen more carefully, see more clearly; see and hear with your hearts, as well as with your eyes and ears, as you go through both your academic work and social growth here at Keuka College.”

Alan also reminded the students that Keuka College stands on certain principles that will both guide and support them in that process.

“Keuka College is where you’ll make strides—and even leaps—in your growth as a person and as a citizen,” he says. “You’ll learn how to better get along with others; to coalesce with strangers into effective teams; and to find and differentiate those wheat grains amongst the chaff.”