The recipient will enjoy a trip to Washington, D.C. to visit the monuments and memorials honoring his service. 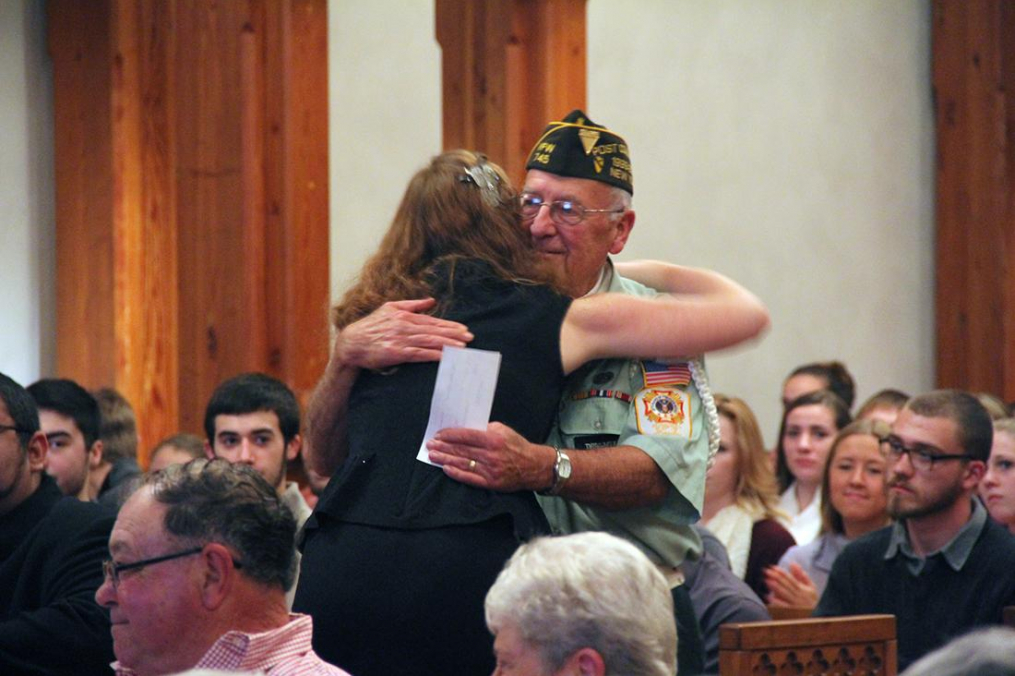 Thanks to the efforts of the student members of the Keuka College Veterans Club, a local veteran will be able to participate in an Honor Flight from Rochester to Washington, D.C. in the spring.

Honor Flight Rochester is one of 130 hubs in a national network which enables members of the military who served during WWII, the Korean, Vietnam or Cold Wars, to travel free of charge to Washington, D.C. to visit the monuments and memorials honoring their service. The non-profit program, coordinated by volunteers, funds trips entirely through the generosity of donors and sponsors. Veterans fly to D.C. accompanied by a “guardian” who assists them in navigating travel to and from the various sites.

The Keuka College Veterans Club conducted two fundraisers in the spring to raise $300 to donate toward the Honor Flight Program; a veteran’s trip is valued at $500. At this year’s Veterans’ Day ceremony in Norton Chapel, Siobhan Costain ‘17, president of the club, participated in a symbolic gesture of giving to a local veteran; a formal check presentation was made Dec. 17 on campus.

“A lot of times veterans are forgotten more than they should be,” said Costain, whose father and grandfather served in the military. “We are awed by the fact that these men and women have done so much for the country, and this is what we could do for them.”

P. Earle Gleason, former director of the Yates County Veterans Service Agency and an Army veteran who served in Vietnam, helps coordinate Honor Flight travel for Yates County veterans along with locals Norm Koek and Andy Swarthout. According to Gleason, some 23 veterans from throughout the county have taken Honor Flights to D.C. so far and another six to eight have applications in process for the coming year.

The Penn Yan volunteers help coordinate local contingents of Yates County veterans to travel together within one of the three honor flights offered from Rochester each fall or spring. Honor flights are awarded on a first-come, first-serve basis, with priority given to veterans of the oldest eras first, then to those in more recent service eras suffering terminal illness.

Unlike other Honor Flights around the country, veterans who travel from Rochester enjoy a 36-hour trip, including an overnight stay at the Hilton Hotel at Baltimore-Washington International airport after a full Saturday of travel to D.C. memorials. A special banquet is hosted for the veterans that evening and according to Rich Stewart, president of Honor Flight Rochester, the time after the keynote speaker concludes can be “quite moving” as veterans begin to share their memories.

“A lot of them will open up and tell stories never told before, even with their families,” explained Stewart, who has made the trip a half dozen times as a guardian or bus leader. “People who’ve never publicly spoken in their lives will say ‘I need the microphone’ and it takes your breath away sometimes.”

Thanks to Honor Flight Rochester, 2,121 veterans have visited the military memorials since Rochester trips began in 2008, Stewart said, adding the vets are often greeted in D.C. by military and government officials. When veterans return to Rochester Sunday morning, they may find as many as 500 to 700 people to greet them, he said. In addition to friends and family, the airport welcome includes patriot guard riders bearing flags, a variety of community bands playing patriotic songs, and even members of the Knights of Columbus who create an archway of swords for veterans to pass under, Stewart described.

“It’s really a hero’s march, if ever there was one. It never gets old,” Stewart said. “Please thank the young folks down there for all they’re doing!”

Local veterans from WWII, the Korean War or ill veterans from the Vietnam or Cold War eras interested in applying for the next Yates County tour-within-a-tour are encouraged to contact Norm Koek at St. Mark’s Terrace or the Yates County Veterans Service Agency for an application to Honor Flight Rochester, Gleason advised. While applications can also be made directly online at www.honorflightrochester.com, online applicants may not be grouped with others from Yates County. The Yates County coordinators also work to defray travel costs for guardians.