Keuka College Students Get a Lesson on Countering Bullying 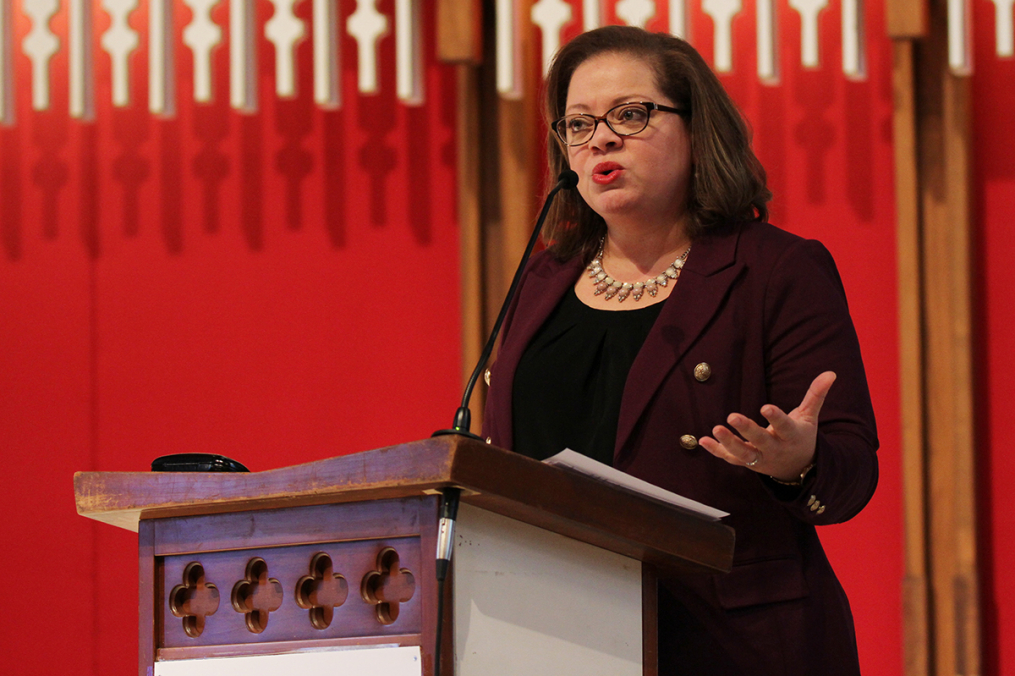 When it comes to bullying, you don’t have to take it.

That was the message delivered by veteran Rochester-area television journalist Norma Holland to hundreds of Keuka College students Tuesday during a Wolf Pause presentation at the College’s Norton Chapel.

Holland, a reporter and anchor on 13WHAM, spoke from experience. While media professionals are already an easy target for online abuse, the floodgates opened last spring when Holland was directed to take part in a station promo dictated by WHAM’s parent company. The promo was combined with those of other company affiliates by the website Deadspin and edited to suggest the participants were espousing a lockstep conservative ideology.

Cue the critics – and they weighed in by the hundreds, flinging nicknames like “Trump Puppet” and questioning her credibility.

“Never question a journalist’s credibility,” said Holland, who, living by her own credo, decided she didn’t have to take it. She responded on her Facebook page, writing, in part:

“The … message you saw me and my colleagues in has damaged the trust you place in us. … That hurts. Here’s the truth: I could have chosen to quit, but who among us has an alternate career in their back pocket ready to go? I have a family to support. That’s not an excuse — that’s reality. Moreover, I have a career I love and worked hard for. Am I supposed to be bullied into giving it up?”

The clouds of controversy eventually parted, giving way to a few lessons about addressing bullies. Holland boiled them down to three key themes:

“Consider who is making claims about you,” Holland advised students. “What is it that’s truly motivating them? What are they afraid of? Do they feel bad about themselves?” The loudest critics are often trying to hide a personal shortcoming, she said, a fact that can put their barbs in volume-lowering perspective.

“Let others be your voice when fighting a bully,” Holland said. “Seek out friends who can spread a message of support online.” One proviso, she added: If a bully becomes threatening, alert the police or other appropriate authorities.

“Know when to put it to bed”

While it can be essential to stand up to online tormentors, it is important to remember that reactions can serve as their oxygen. “People will put their energy elsewhere,” Holland said, “when the see you are not feeding the fire.”

Holland’s final bit of advice was perhaps counterintuitive in an age of online oversharing: “Think twice about sharing your opinion, unless someone asks for it.”

“I know, it’s the internet and everyone has an opinion, but watch what you say to other people,” she concluded. “Don’t be the bully.”

The forum was held in conjunction with Constitution Day, the annual holiday marking the signing of the U.S. Constitution 225 years ago.