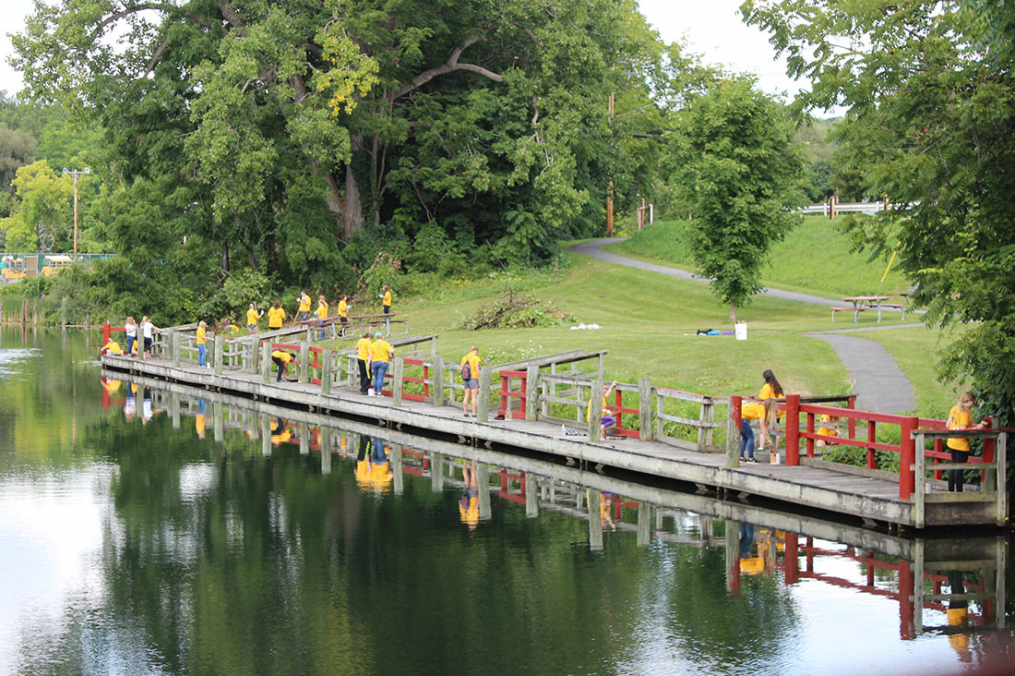 For more than 125 years, Keuka College has fostered the ideals of the humanistic tradition and a vision for a life committed to academic excellence, professional achievement, and service to humanity.

And the newest Keuka College students were given the opportunity to perform a service to their home-away-from-home by practicing social responsibility. The new students, some 450 strong, introduced themselves to their Penn Yan neighbors by cleaning up some of the Keuka Lake Outlet Trail.

The 6.6-mile trail travels between the villages of Penn Yan on Keuka Lake and Dresden on Seneca Lake. The Keuka College students were assigned to various locations along the entire length of the trail.

While the College offers myriad opportunities throughout the year for students to practice social responsibility, including such events as Make a Difference Day and Celebrate Service… Celebrate Yates, this marks the first time new students have undertaken such a project as a class.

According to Amanda Wickham, coordinator of transfer and commuter student services, this new project was added to Wolf Week, the College’s transition week for new students, to help establish strong bonds with each other, and demonstrate that “Keuka College Wolves give to their community and care about our surroundings.”

“Our incoming students are completing their first community service project together,” adds Amanda. “Because Keuka College is community-focused and believes it is important to give back to not only our College, but to our neighbors in Penn Yan, we thought this project would be a good way to introduce our new students to the culture of the College.”

Like Amanda, Whitney Cowan ’21 also believes in the power of giving back to her College community.

“It is important to give back, because it shows the community that we care. And after we are done, the Outlet Trail will look nicer,” she says.

Kacey Philbrick ’21 was among a group assigned to paint a boardwalk railing near the boat launch in Penn Yan.

“Painting the railing sounded daunting at first,” she admits. “But it’s been really fun, and I can already see the difference the painted railing will make.”

Kiara Pointer ’21 agrees, saying that she “enjoys painting, and it does make the area look nicer,” while classmate Morgan Spencer ’21 adds “painting is soothing, and I’ve made a new friend.”

And building new friendships is one outcome of Wolf Week, something Amber Ward ’21 appreciates.

“Wolf Week and this project have helped me meet people, kept me distracted from being homesick, and I’ve begun to build new friendships,” she says.

Together, the newest members of Keuka College logged nearly 2,700 hours of community service along the Outlet Trail. They were tasked with such duties as picking weeds, raking, clearing brush, collecting garbage, sawing limbs, and painting.