Learning and Living Down Under 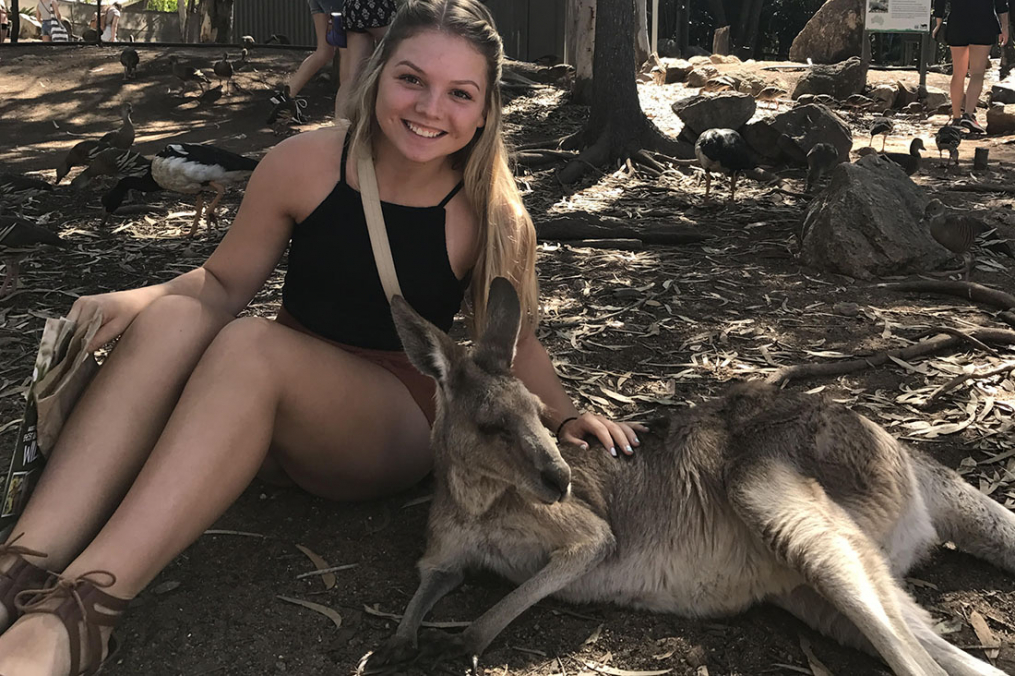 Keuka College junior Vanessa Tsarevich loves to travel and explore new places, so it’s fitting that when looking at colleges at which to spend the fall 2017 semester abroad, she chose Australia’s James Cook University (JCU).

Captain Cook was a British explorer, navigator, and cartographer in the Royal Navy. Among his credits are three voyages through the Pacific Ocean, during which he achieved the first recorded European contact with the eastern coastline of Australia and the Hawaiian Islands.

Globe Trotter
And while Vanessa may not circumnavigate the globe, she is already a seasoned traveler in her own right.

“I’ve always dreamed of traveling across the world alone, exploring breathtaking cities, being exposed to different cultures, and eating exotic foods. I originally wanted to study abroad because of my love for traveling, but I also wanted to do something out of my comfort zone—something that would give me life experience I could thank myself for later,” says Vanessa. “I knew college would be the perfect time to do something so unique, so I did extensive online research, taking into consideration where I’ve always wanted to visit, and what was important to me: sunny weather and English-speaking people. I thought Northern Queensland Australia was the perfect fit for me, which was when I found James Cook University.”

Vanessa grew up traveling to Europe “all the time, as I spent every summer in Ukraine with my father’s side of the family.”

Additionally, Vanessa participated in the College’s trip with 4 Walls to Nicaragua in January 2017. Vanessa says the experience made her love for traveling to new places even stronger.

“When I came to Australia, I realized I knew no one, and no one knew me,” says Vanessa. “It was scary, but thrilling at the same time. Since I am studying abroad in Australia, I really wanted to cross the Great Barrier Reef off of my bucket list, and I ended up being able to snorkel and paddleboard over the reef, which was one of the coolest things I have ever done.”

Making Her Mark
A remarkable navigator and explorer, Captain Cook influenced many areas of human endeavor: astronomy, marine surveying, cartography, geography, natural history, and anthropology. And like Captain Cook, Vanessa intends to leave her mark. A biomedical major at Keuka College, she wants to ultimately pursue a career as a surgeon.

“I chose biomedicine as a major to prepare myself for the Medical College Admission Test (MCAT) and, ultimately, medical school,” says Vanessa. “I know it is very cliché, but I want to help people. Everyone, at some point in their life, will need medical care and sometimes, it can be life-or-death. The reason the human race is able to live as long as we do is because of the dedication of doctors. Being part of that, something that is so much bigger than me, would be an indescribable feeling.”

“My favorite class is immunology and infectious diseases because of the cool parasites and microorganisms we get to work with every week,” says Vanessa. “In the lab, we did a few basic cultures of different bacterium, but the coolest part was when we worked with living parasites. My professor, Jeffrey Warner [associate professor in JCU’s College of Public Health, Medical & Vet Sciences] traveled to Papua New Guinea to conduct a research project on patients with tuberculosis (TB), in hopes he could help effectively treat their illnesses.”

What Professor Warner found, Vanessa adds, is that their serology tests didn’t match up with a TB infection, so he tested to see if they had a secondary infection.

“To his surprise, all of his patients had a parasite living inside of them,” says Vanessa. “He ended up bringing samples of their feces back to Australia so we could examine them. We found there were numerous gastrointestinal tract parasites including Trichuris trichuria, Ascaris lumbricoides, and Enterobius vermicularis. It was a really cool experience, especially because I wouldn’t have gotten this opportunity in the labs at Keuka College.”

Of course, Vanessa adds, the education system in Australia is “very different” from what she is used to.

“Students take one exam for each class, and only do a couple assignments through the entire semester,” she says, “so it’s basically all-or-nothing when it comes to final exams. Practicing that kind of exam style has built my confidence for my MCAT exam, which I plan to take this upcoming summer.”

Expanding Her Comfort Zone
There is so much more to life that we can’t experience staying in one place, Vanessa says, and after this experience, she believes she is more ready, and confident, for medical school—the next big step in her life.

“Studying abroad has given me even more drive and ambition to pursue a career as a medical doctor. Being on my own for nearly five months, 10,000 miles away from my family and friends, made me realize I really can do anything I set my mind to,” she says. “This study-abroad experience has exposed a better version of myself that I could have never done staying home. I hope I can inspire others to step out of their comfort zones, take advantage of study-abroad opportunities, and do something they’ll thank themselves for later.”

“Keuka College’s staff and faculty were incredibly supportive of my decision,” says Vanessa. “Dr. Tom Carroll [professor of chemistry], especially, really convinced me that this was something I could do. His belief in me is why I am where I am today, and I cannot thank him enough for that.”