They each painted a palette for the annual fundraising event. 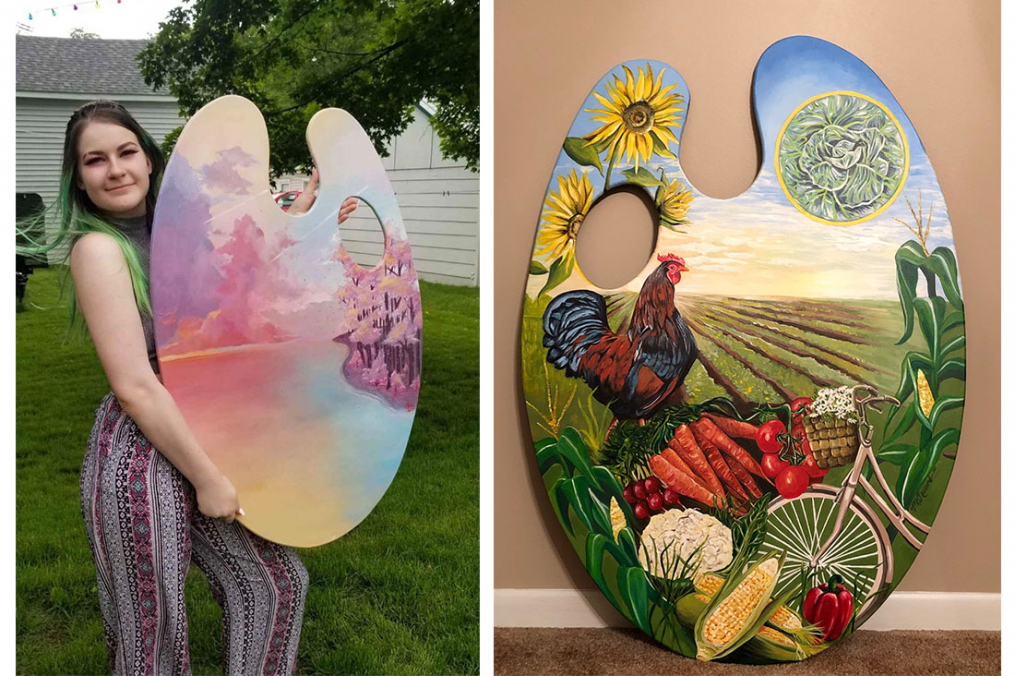 Keuka College junior Mary Glaccum (left) shows off the palette she painted, titled "Hope," for the Palettes of Keuka Art Tour. On the right, Associate Professor of Art Melissa Newcomb's palette is titled "Rise and Shine."

Since 2007, the village of Hammondsport has displayed hand-painted, oversized artists’ palettes, each illustrating a scene of life on Keuka Lake.

Known as the Palettes of Keuka Art Tour, the annual community event celebrates the beauty of Keuka Lake through the talented work of local artists.

“We have 30 artists painting a palette, and each will be displayed throughout the village of Hammondsport this summer,” says Mary Jane “MJ” Bray, associate director of the Keuka College Leadership Circle, and a member of the Palettes of Keuka committee.

Two of the artists this year have a Keuka College connection—Associate Professor of Art Melissa Newcomb and Mary Glaccum ’21 an art and design major, who each painted a palette for the event.

Melissa’s Palettes of Keuka is titled “Rise and Shine,” while Mary titled her palette “Hope.”

“I’m so grateful to Mary Jane for encouraging me to participate,” says Melissa. “This one took some time to plan and several hours of painting, and I’m thrilled it’s completed.”

According to MJ, people can stop by the Hammondsport Chamber of Commerce throughout the summer and pick up a map of the palettes’ locations, and take a self-guided walking tour to view them.

“Each palette will have a secret letter,” says MJ. “Collect each letter and unscramble them to find the answer to a trivia question, and you will be entered to possibly win a prize.”

On display from June 28-Aug. 31, the Palettes of Keuka Art Tour culminates in an auction set for Saturday, Aug. 31. Proceeds from the auction fund scholarships for graduating high school seniors in the Hammondsport School District, as well as the purchase of much-needed art supplies for the elementary school.