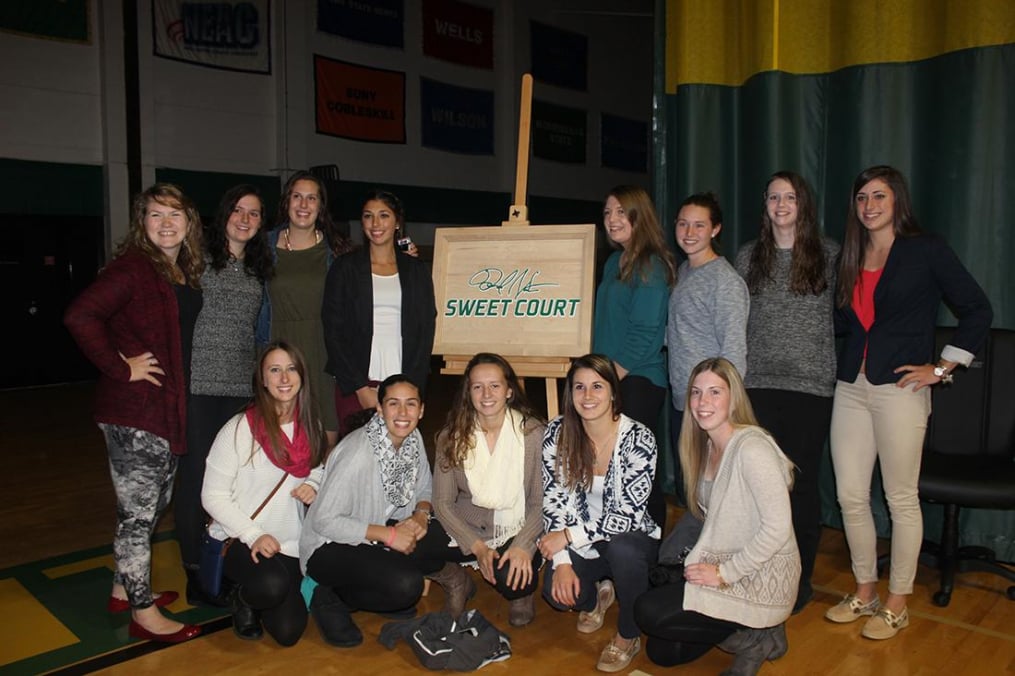 On opening night of Green & Gold Celebration Weekend at Keuka College, the College announced its intention of naming the basketball court at the JMW Recreation and Athletics Center after longtime coach and Director of Athletics David Sweet.

“David M. Sweet Court” is a plan brought forward from former players at Keuka College with the support from the Athletics Booster Club. “Everything you see with the Department of Athletics at Keuka College, Coach Sweet has had his hand on,” said Shawn Reed ’89, a four-year Men’s Basketball player for Keuka College. “It is appropriate to name the court after coach. He knows every inch of the floor and the building. He is the reason Keuka College Athletics is as successful as it is today.”

Sweet has served as Director of Athletics since Keuka College returned to being a co-educational institution in the fall of 1985. That also marked the beginning of his tenure of the sidelines for the Men’s Basketball team at Keuka College. He led the then Keuka College Warriors to a win in their first game and guided the team to a 16-6 record that inaugural season. Sweet would stay in charge of the Men’s Basketball team for 15 seasons, amassing 203 victories.

Overall, David Sweet coached 34 sports seasons at Keuka College, leading his teams to 500 total wins, 12 conference championships, and 4 NCAA Tournament appearances. This was all done while also serving as the Director of Athletics at Keuka College. Under his guidance, the Department of Athletics won a total of 53 regular season championships and made 19 NCAA Division III Tournament appearances.

Sweet helped cofound the North Eastern Athletic Conference, which Keuka competes in today, as well as developed the Keuka College Athletics Hall of Fame and Booster Club. He led the effort for the multi-million dollar field renovations at the Jephson Community Athletic Complex and has guided the Department of Athletics from three varsity teams in 1985 to 19 teams today.

The double major crammed a lot – including a Field Period stint at an Illinois newspaper and directing a College musical – into her first year on campus.