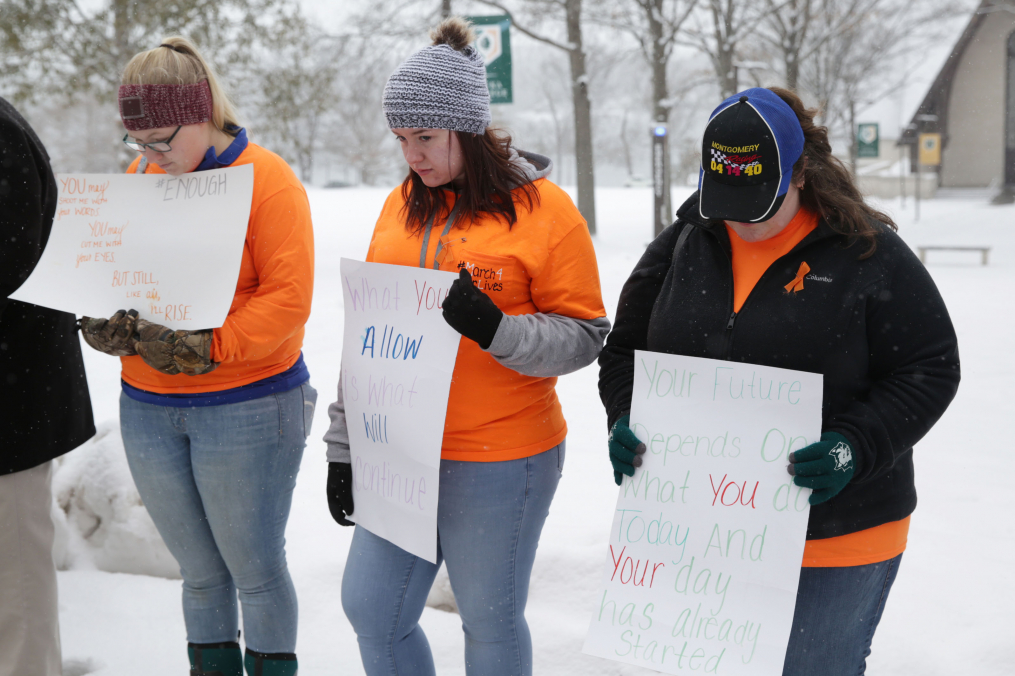 Three Keuka College students hold posters they made in a show of solidarity with the national #ENOUGH movement during an event that included 17 minutes of silence on Wednesday, March 14.

Some 100 members of the Keuka College community participated in the national #ENOUGH event Wednesday, March 14. The event, held one month after the school shooting in Parkland, Fla., encouraged schools across the nation to raise awareness about issues of school safety and the impact of gun violence.

Organized by the Women’s March Youth Empower, Wednesday’s commemorations saw participating schools begin their events at 10 a.m. and include 17 minutes of silence in memory of the 17 victims of the shooting at Marjory Stoneman Douglas High School.

Keuka College’s event was led by two social work students, Kacey Peters ’19 and Amanda Utter ’20, who organized an educational event and follow-up discussion on campus. Participants lined the sidewalk behind Ball Hall, some holding signs, some standing in quiet reflection, all silent for 17 minutes. HEOP Counselor and Rev. Robert Hoggard offered a prayer before the event.

“I told Amanda about the movement and expressed my interest,” said Kacey, describing how the College’s participation got its start. “From then, we worked together sending emails to faculty to see if it was possible for Keuka College to join the movement. After [Professor of Social Work] Stephanie Craig found out about our interest, she asked us to come into her Ethics and Diversity class, as it was also her students’ campus-wide project.”

After the 17 minutes of silence, a discussion was held in the College’s Norton Chapel. College Chaplain Rev. Eric Detar discussed the importance of kind words and actions towards one another, Director of Campus Safety Jim Cunningham shared the College’s safety protocol and the Office of Campus Safety’s role in an emergency, and Professor Craig spoke about the importance of self-care and what we can do to ensure we take of ourselves each day.

The audience also heard from College President Dr. Jorge L. Díaz-Herrera, who applauded the efforts of the students.

“Keuka College supports freedom of speech of all members of the College community, and these students are providing awareness of an important issue,” said Dr. Díaz-Herrera. “We encourage vigorous debate and discussion of all issues, and we are continually improving our campus safety protocols, as preparedness is important.”

In fact, Keuka College will conduct a previously scheduled test of its Emergency Alert and Shelter-in-Place procedures Tuesday, March 20.

Kacey said she never imagined that the College’s event would grow as big as it did, and both she and Amanda praised the College’s faculty for its support.

“Participating in the #ENOUGH movement was an idea that started with some students, but was brought to life by the support of the faculty at Keuka College,” said Amanda. “As social workers, it is our job to advocate for change, and that is exactly how our interest was sparked. Hearing about the shootings breaks my heart, but nothing will change unless we take action ourselves—it’s up to us. Participating in this movement was an opportunity for us to show our support for everyone who has been impacted from school violence.”

Kacey says she takes pride in the work that she and Amanda did to make the College’s event possible, crediting those in Professor Craig’s class for their efforts.

“Without them, I don’t know if this would have been as successful,” she said, citing students who prepared posters, handed out ribbons, and created self-care brochures.

One of those students, social work major Kali Hemings ’20, believed participating in the movement was deeper than simply taking part in a class activity.

“I have seven younger siblings at home, with the youngest being just two years old,” said Kali. “I want to know that each of them are safe every day when they go to school. I don’t ever want to receive a call that says something happened to one of them. I believe everyone deserves to feel safe when they go to school.”

“Change might take time, and it might be small,” said Chloe, a social work major. “You may feel like you are one just one person, but please understand that you can make a huge impact and be a tremendous influence.”

“I am overwhelmed by the support we have gotten from everyone at the College, and I am proud to know that as a community, Keuka College cares,” said Amanda. “I believe that change starts locally, and that by being a friend to everyone, I can make a difference. I am proud of our College and its participation in this movement.”