A Field Period® trip took Megan out of her comfort zone. 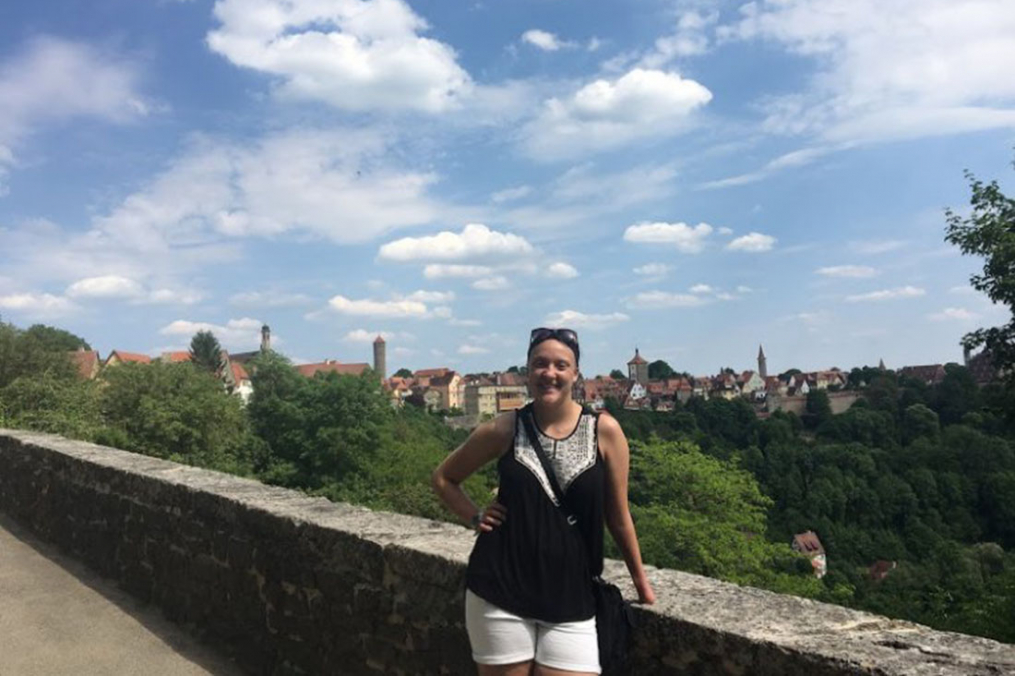 When opportunity knocked on Keuka College sophomore Megan O’Dell’s door, she answered. She said “yes” to the chance to travel to Germany, Austria, and Switzerland for her summer Field Period® experience.

“College is a time for discovery and exploration, and thanks to my Field Period® trip, I have once again freed the traveler’s spirit that resides in me, because there is an entire world to explore,” says Megan, who received a Judith Oliver Brown Memorial Scholarship, which honors the 1963 Keuka College graduate and is designed to assist students planning to pursue culturally oriented Field Period® experiences.

Megan, a unified childhood/special education major, has made a deep commitment to her academics and fulfilling her dream of becoming a teacher. But she also knows that education is more than well-written papers and “A-worthy” presentations.

“Prior to this trip, the only destinations outside the U.S. that I had ventured to were Canada and the Dominican Republic,” she says. “This longer, farther, trip abroad taught me so much about myself, the diversity of the world, and the similarities between seemingly different countries.”

The goal Megan most wished to achieve during her Field Period® was to step outside of her comfort zone, which she believes she did.

“In the past, I have been rather shy when exploring unknown places, often opting out of things I know little about,” Megan admits. “However, in the interest of making the most of this experience, I did everything I could at each destination we visited, even when it required me to go outside my comfort zone and try things I had never dreamed of trying.”

Megan says she did her best to immerse herself in German, Austrian, and Swiss culture, actively participating in every activity she encountered, and experiencing all that she could.

“I tried so many new things, and overcame many fears and obstacles that once would have held me back,” she says. “As a result, I experienced an amazing amount of personal growth over the course of this trip. Even though I was part of a large group, my confidence, responsibility, and independence increased dramatically.”

With this responsibility, Megan adds, also came the freedom to choose what she wanted to do or where she wanted to explore during some free time.

“I think I did an excellent job staying in the moment and being fully present at each destination,” says Megan. “This goal was one of the most important to me, mainly because I often get consumed by external factors I cannot control and I lose sight of the beauty around me. I did not let this happen and as a result, I was able to embrace every part of this trip, roll with the struggles, and enjoy the successes.”

And because Megan allowed herself to be immersed in the culture, she thinks she learned some quite tangible information on this trip.

“For one, I became much more cognizant of the differences that exist, and the value that these differences can possess,” she says. “Also, I learned that it is fairly easy to find similarities among groups if you agree to set aside the differences. I think that learning how to communicate with people of other lands shows a deep level of respect for the diversity of the world.”

For Megan, this trip gave her the confidence to do things that she had never done on her own before, and embrace the opportunities that came her way.

“If I had stuck to my usual habits and watched from afar instead of getting involved, I never would have made some of the most valuable memories of my life,” Megan says. “I wouldn’t know what the city of Munich looks like from atop its 600-foot-tall Olympic Tower. I wouldn’t know what it is like to order traditional German cuisine from a menu I cannot read. I wouldn’t know how it feels to rush down slides hidden in a retired Austrian salt mine. It would’ve all been missed, but thankfully it wasn’t, and now I’m more excited than ever to travel and branch out.”

Megan adds that her Field Period® trip to Germany, Switzerland, and Austria will stick with her for the rest of her life

“I knew that it would be a special journey from the minute I signed up, but every single day of this Field Period® surpassed my wildest expectations,” says Megan. “My decision to sign up for Germany and Switzerland was quick, and it ended up being a most amazing experience, and one of the best decisions of my life.”