The sophomore believes that creating connections with students is the best part of being a teacher. 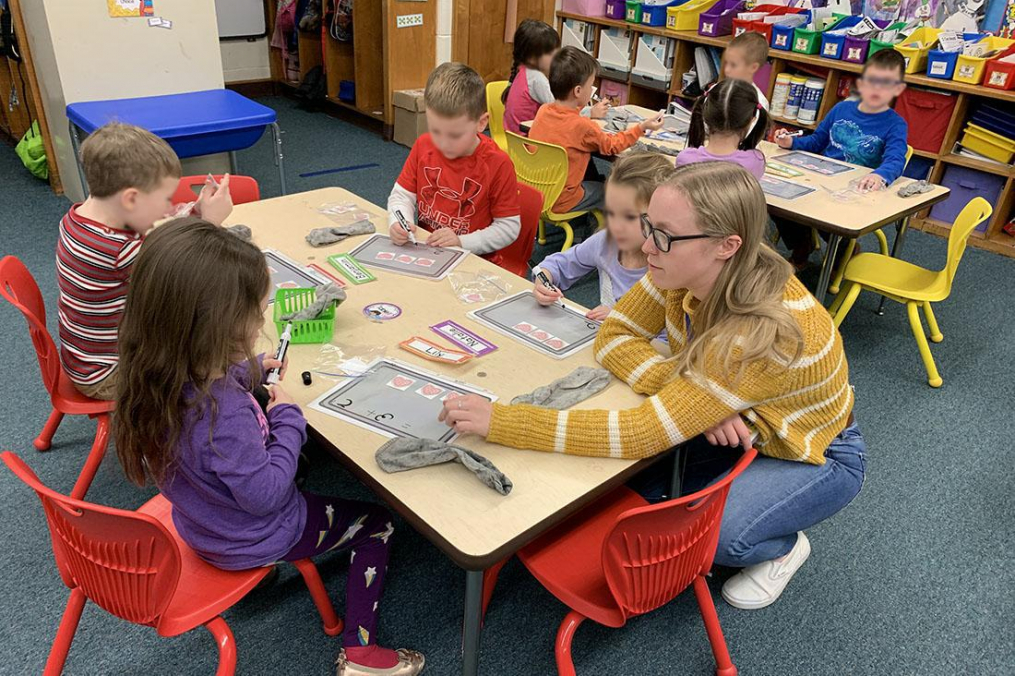 Adeline Bradley '22, helps kindergarteners with their work during her January Field Period®.

What could have been a missed first Field Period® experience for Keuka College sophomore Adeline Bradley turned into one of the best things possible for her.

Adeline enrolled as a psychology major with a minor in political science. She had arranged to spend her first Field Period® observing a school psychologist, as she wanted to work with children.

“One week before its start, I received word that the psychologist had left for another school district,” says Adeline, a resident of Bradford, N.Y., in Steuben County. “To salvage my scheduled Field Period® experience, I requested to observe the school’s pre-k classroom.”

As it turns out, Adeline discovered her true passion—teaching. And finding your true passion is just one aspect of Field Period®, as Adeline learned.

“It is also an opportunity for students to go out and ‘practice’ a real job experience in their major to help determine if they are going to be happy pursuing that field,” she says.

That’s just what Adeline’s first Field Period® did, leading her to change her major to early childhood education. Field Period® is also a chance to fine-tune your interests, which helped Adeline realize she would like to teach kindergarten.

“Entering into my second Field Period®, I was convinced that I only wanted to teach pre-k-aged children,” says Adeline, who spent January in a kindergarten class at Horseheads Center Street Elementary School. “After this new experience, I am now leaning towards kindergarten, as I discovered I enjoy interacting with children in a more academic curriculum.”

Adeline was able to be an active part in the class’s academic curriculum. She guided students in both English Language Arts (ELA) and math assignments, checked their work, led small group activities at academic stations, supervised the classroom, and provided additional support to Mrs. Ripley as needed.

In fact, Adeline enjoyed the structure of the classroom so much, she hopes to incorporate some its aspects—like the academic stations—into her own classroom one day.

“By switching between stations with varying academic activities, the children do not lose interest, and many learning styles are met,” she says.

That’s important to Adeline, who believes watching them blossom as they develop and learn, as well as creating connections with students, is the best part of being a teacher. She shares that connection with Dr. Nicholas Koberstein, assistant professor of child and family studies and psychology.

“He takes a topic and makes it interesting and relevant to help us understand, and he is very supportive of us,” says Adeline, who believes that with “each class and Field Period®, my interests and career path solidifies.”