For Andrew Bagley ’19, Keuka College 'Fit the Mold of My Life' 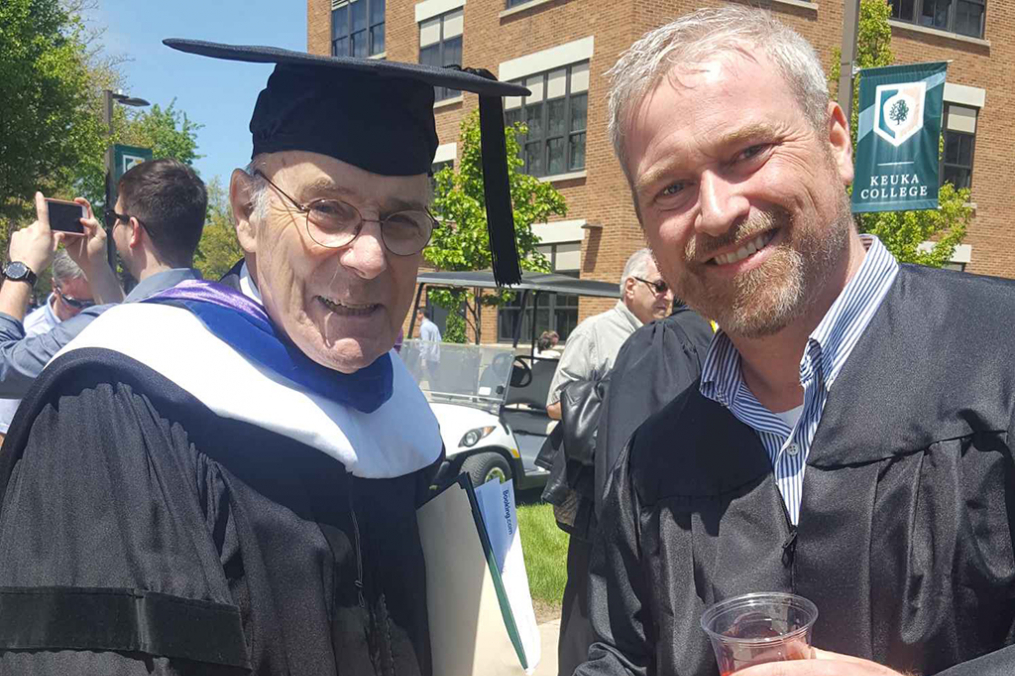 In 2015, Andrew Bagley made a New Year’s resolution. He vowed to finish his bachelor’s degree while working full time.

“I didn’t have the time or money to go full time,” Andrew says, explaining why he needed a program geared toward working adults. “But I went to a Keuka College orientation and I thought, that’s the program for me.”

Keuka College offered a program that “fit the mold of what my life was at the time. One class at a time, meet locally with cohort once a week, a two-year program,” Andrew says. “Boom – in two years I would be done.”

The journey wasn’t quite that simple, however. When classes started, he was working remotely for a marketing company out of Binghamton – an “ideal” full-time job that he supplemented by bartending a couple of nights a week. But both jobs ended within a month of each other.

Andrew felt at sea, trying to provide stability and focus for his wife and children. About halfway through his Keuka College program, he withdrew.

Then, in 2017, with the support of his wife, he rejoined a company he had worked with earlier in his career, Fastenal, and accepted a challenge.

“Fastenal asked me to help them with an underperforming territory in Fulton, Oswego County,” he recalls. After successfully reopening that store in Oswego, Andrew felt it was time for another success: completing his bachelor’s degree.

Once again, he took it one class, one professor at a time.

“My project management class came at the same time I had to move the Fastenal branch to Oswego in 2018,” he says. “That was my project in class.”

Andrew was able to make the new store part of his class discussion. He had a lot to talk about: In one year, it became Fastenal’s second-best performing location in the country.

Advancing through the organizational management program showed Andrew what type of learner he is and reinforced the importance of education in the business world.

“I think it’s imperative, if you're going to manage, to realize that everybody learns differently,” he says.

Now, as a general manager of operations and sales for Fastenal, Andrew says the Keuka College organizational management program helped him learn how to communicate and create a successful culture.

“You become a magnet,” he says. “People want to work with you.”