Melissa Newcomb contributes to 800 square foot mural which invites viewers to ‘Step Back in Time.’ 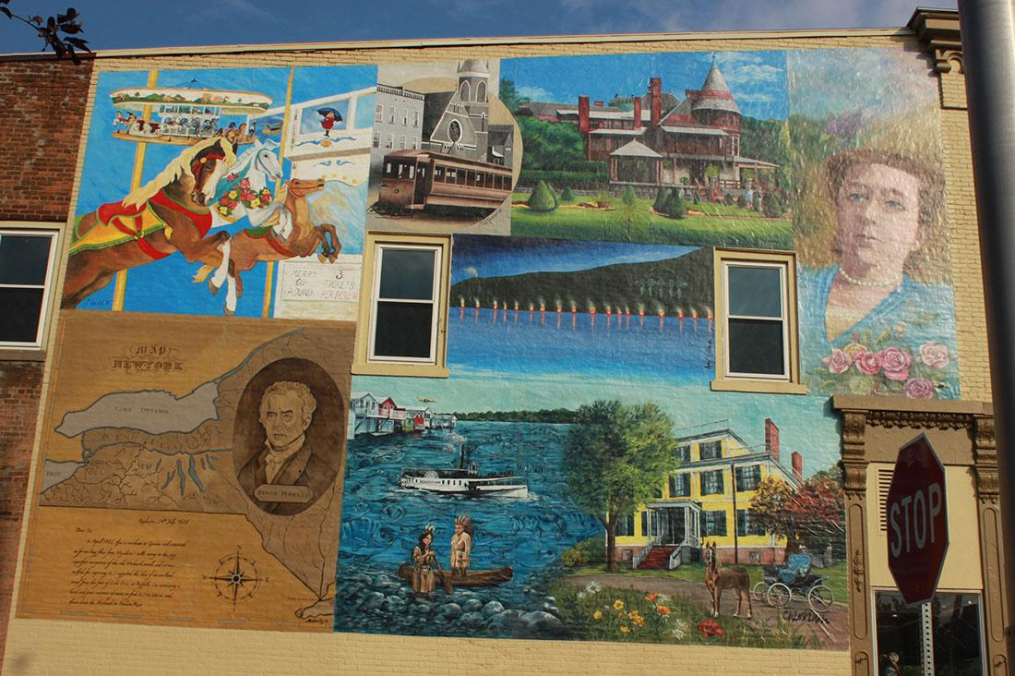 Melissa Newcomb, assistant professor of art, contributed significantly to an historic mural on display on the side of Crown Jewelers along Main Street in Canandaigua.

Titled “Step Back in Time,” a mural was painted by five artists. Including Melissa, the other artists are Meredith Mallwitz, Chloe Smith, and Jane Alden. Amy Colburn, who also painted part of the mural, served as leading artist/director and mentor for the project. The goal for the project was to create a mural highlighting Canandaigua’s rich history and iconic imagery.

“I painted Sonnenberg Mansion and the Canandaigua trolley, which are at the top and in the middle of the collage,” says Melissa who also coordinates the College’s art and design program and the Lightner Art Gallery. “The total width of my section was 18 feet, and the longest panel was 10.5 feet. The mural was painted on a fabric called Evolon, a strong, lightweight, composite fabric. It was hung on the exterior wall using a gel medium mixture that acts like paste. The whole thing was varnished with the same glue-like substance, protecting the mural for years to come.”

Melissa learned of the opportunity to become part of the mural through her Facebook page.

“I believed it was a great opportunity to work with other artists,” says Melissa. “Considering I grew up in the area, and absolutely love Canandaigua and its history, I thought it was appropriate to apply as a local artist and resident.”

According to Melissa, her part was completed in about two months.

“I’ve always considered my work to sway towards realism,” says Melissa. “I have a love for painting, photography, and the historical process. I’m highly attracted to detail, especially the element of line. I’m also attracted to not just black and white/sepia photographs, drawings and/or paintings, but rich colors, which are quite evident in the lush greens through out the foreground of the Mansion. The finished project came out even better than I imagined.”

The best part, says Melissa, was working with a team of artists.

“There were a total of five artists involved in the project and it was so inspiring,” says Melissa. “Each one is so talented, we all supported each other, and worked incredibly well together. It was like a gigantic puzzle, with each section displayed a uniquely strong style, yet fits so well together as a whole. It was truly inspirational seeing everyone’s work come together.”

During an interview with Debbie Smith of Intuit Marketing, Melissa admits she was hesitant at first to apply for the call for artists to contribute to the mural, which was a juried process.

“So I called my mother, one of my biggest supporters, and she said to ‘go for it—what do you have to lose?’” says Melissa. “I’m so grateful I went for it and I was honored to be selected. It has been an incredibly personal experience. It was challenging, motivating, and rewarding. There is nothing greater than that, especially when you do what you love, and when you witness your own artistic growth.”

Adds Melissa: “With any project there are challenges, but that’s what makes each project exciting and rewarding. Painting is a form of meditation and therapy for me, and it’s been such a wonderful opportunity, and has been so much fun.”