Christina spent a month as a contributing writer for the Eagle-Observer newspaper. 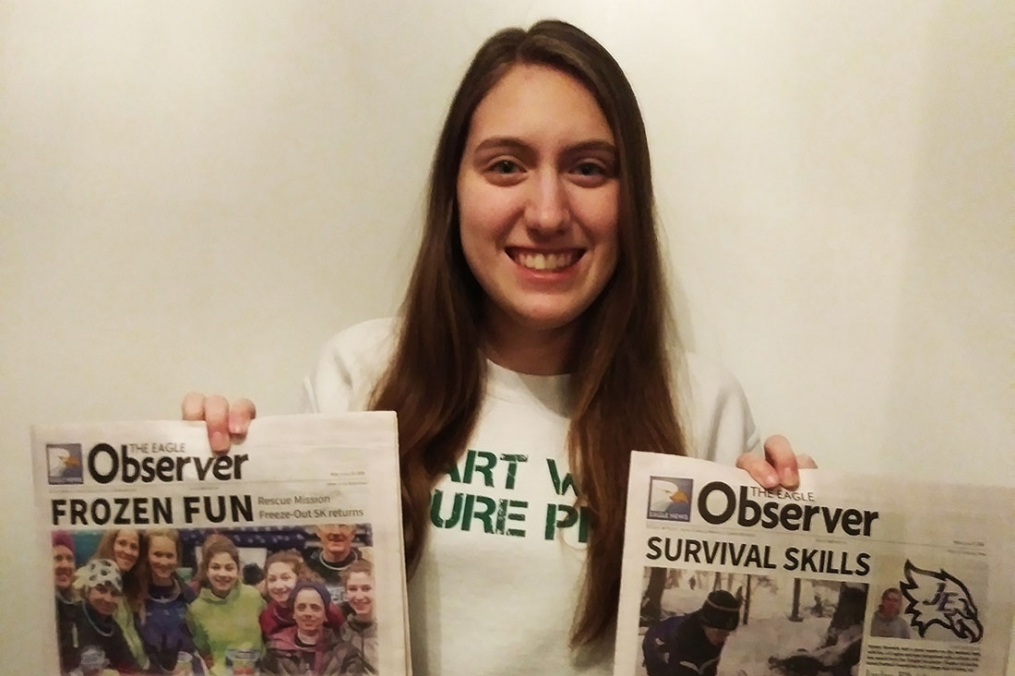 As a child, Keuka College sophomore Christina Young says her career ambitions ranged from actress to astronaut. One occupation that had never crossed her mind: journalism.

But as she grew up, her love of the written word likewise grew and, today, Christina is enrolled at the College as an English major with aspirations of becoming an editor.

“I chose to major in English because it was my favorite subject in school, and I have always loved reading and writing,” says Christina. “I also thought that a degree in English would be one that employers might consider useful for a broad range of jobs.”

To assist her in reaching her editorial goal, Christina spent the month of January completing a Field Period® at the weekly Eagle-Observer newspaper, which covers much of the Syracuse, N.Y., area.

“When I was a kid, I probably would have found writing for a newspaper mundane,” Christina says. “I originally thought I would try to edit novels, but having just finished my internship with an editor from the newspaper, I would definitely consider a newspaper editor as being a possible career choice for me.”

Part of why Christina enjoyed her Field Period® was being able to interview people in different Syracuse-area communities for a variety of stories.

“I have talked to a lot people who have just opened businesses, and a few who have received an award or scholarship for various things,” says Christina, who has also taken her own photos to accompany her stories. “I’ve also covered a lot of events, like presentations or competitions, as well as a polar plunge at Skaneateles Lake. I got to have fun while doing my job at the same time—and I think that’s amazing.”

Also linked to her byline are stories on a 5K fundraiser, an art display at a local library, a new pizza restaurant, and giving folks a “taste” of what’s different about a café and convenience store, among others.

But Christina’s favorite story saw her tapping into her high school Spanish skills.

“One owner had just opened a new Mexican restaurant,” Christina explains. “His English was spotty, so I decided to take a chance and try to interview him in Spanish. I took a few years of Spanish in high school, but I’m by no means good at speaking it. However, he was so touched by the effort that by the end of the interview, he gave me a free burrito and a soda. He was my favorite person to write about by far."

But the confidence to talk with people to learn and tell their stories didn’t come naturally. Christina sees herself as shy, so initially, she was nervous about interviewing strangers.

“One thing I realized from this experience is that it’s not as scary talking to people as I had originally thought,” she says. “The more I did it, the more comfortable I became. Everyone was so polite and nice, and I was pleasantly surprised by the outcome.”

And to Christina, meeting the people whom she wrote about was an honor.

“It is a very humbling experience to mold someone else’s story into an article that can be printed in a paper, and then read by other individuals in the community,” says Christina. “It’s something that I think is a big deal, so I am extremely grateful that I was able to participate in this Field Period® experience.”

Christina also says that this Field Period® showed her that not everything always goes according to plan.

“I am someone who plans everything, so this internship was a wake-up call in the sense that sometimes things shift on the fly, and other people’s schedules won’t always match up with your own,” she says. “And, sometimes, you might even have to speak impromptu Spanish, but that was part of the experience, which is something I will never forget.”