Donations to Tanzanian School Will Have Lasting Impact

The Center for Professional Studies donated laptops and t-shirts to the school. 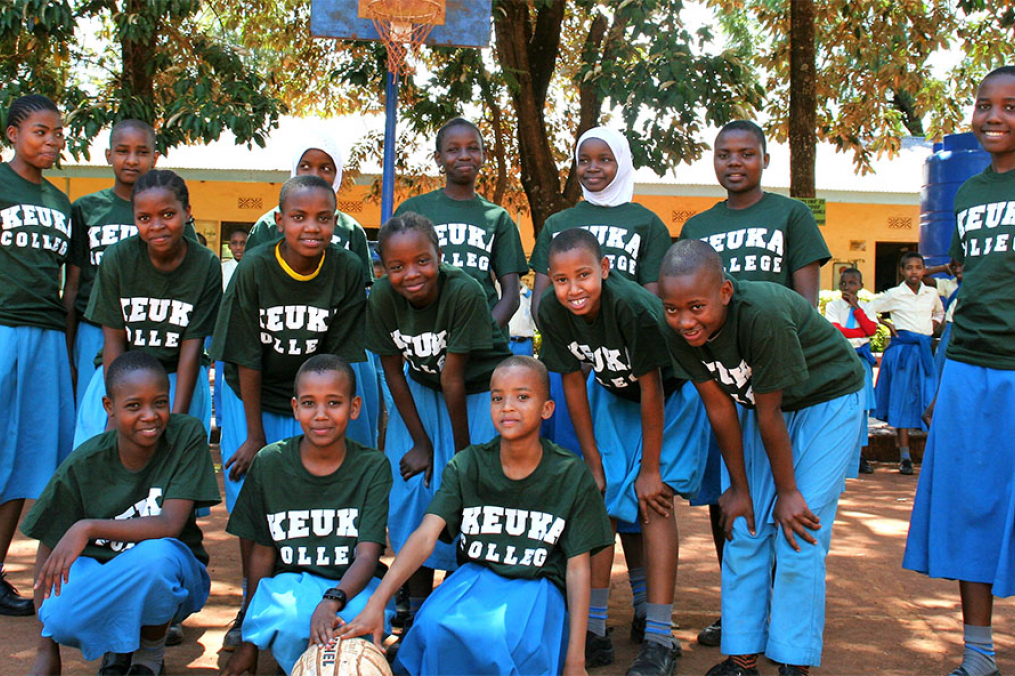 A small school in the Karatu District of the African country of Tanzania recently received a package of Keuka College t-shirts, sent by the College’s Center for Professional Studies (CPS), nearly 7,500 miles away. The Tumaini Junior School also received two laptops, which will help the students further their learning opportunities.

Troy Cusson, instructional design manager for AOE, was introduced to the Tumaini School during his first trip to Tanzania in 2013 when he climbed Mt. Kilimanjaro and Mt. Meru with Journeys of Inspiration.

During this trip, Troy says Journeys of Inspiration was transitioning from an organization that gave inspirational adventures to the not-for-profit Journeys of Solutions, which provides individuals from around the world with avenues to give back and help those in need. Troy adds that the organization matches individuals who want to help in some way with deserving projects around the world, many of which were in locations that were visited by people during their Journeys of Inspiration excursions, including the Tumaini Junior School.

What attracted Troy to the school was its educational model.

Founded by Modest Bayo and his wife Lightness, the school began in their home with just 17 students in 2004. As a young man Modest’s goal was to be a teacher, but he entered the safari business as a guide because it paid much better. Once established as a guide, Modest returned to his commitment to education and was motivated to found a primary school that would help his community.

“They realize, as many do, that education is the key that will help open up many doors for thier students,” says Troy. “Education also offers an opportunity to improve their lives and the lives of their families. The problem is they have far, far less resources than many in the world do.”

But lack of resources didn’t stop Modest and Lightness. Now in its 13th year, Tumaini Junior School is recognized as the leading school in the Karatu district, one of the top schools in the Arusha region, as well as nationally. The school is also recognized as a community resource, both from the citizens and the district government, and the Bayos are admired as visionary community leaders.

Providing some of the resources the school needs seemed like a no-brainer to Troy.

“A simple, functioning laptop that to us costs as much as we spend on dinner out with a family of four, about $60, it wasn’t even a consideration for me,” says Troy. “For many of the students in the school, this is their first opportunity to see a laptop, much less learn how to use one. When I mentioned it to Anne [Killen, associate vice president for AOE], she immediately wrote her check out. How could you not?”

“These students want to learn, and they see every aspect of their education as opportunity for advancement in life, and it starts with the foundations of reading and writing,” he adds. “Now just imagine what having access to a laptop means for them—you tell me—how could it help them? There is no way to even comprehend how much impact they will have.”

“I am continually amazed at the projects completed by Journeys of Solutions, and the positive impact they have on the lives of people,” says Anne. “Supporting these projects is one small way I can help. From purchasing a brick that was used in building a home, to the laptop donation at the Tumaini Junior School, my small gestures will have a lasting impact, and add a social and education value to make the world a better place.”

Journeys of Inspiration had been traveling to Tanzania for several years by the time Troy was prepared to climb Mt. Kilimanjaro and Mt. Meru, he says, and in doing so had made many meaningful connections with several of the porters who guide climbers up the mountain.

“Other travelers saw many areas of the porters’ lives that were in need of a little help and support,” says Troy. “Most live in one or two-room mud huts or shanties made of cardboard and metal scraps, with no or little access to electricity and clean water. Some have children, or know of children, who are in orphanages. Many parents drop their children off to orphanages in the hopes that they will be able to provide a better life then the parents will be able to.”

“In addition to supplying the basics in life, these orphanages have asked for help with getting the children access to a good education,” adds Troy. “Many Journeys of Inspiration travelers have recognized this need, and have agreed to help out through individual student sponsorship and/or by donating supplies. I was able to visit the school in 2013 and see first hand the amazing impact it is having on the children’s lives.”

Troy adds he was delivering additional laptops and school supplies last May, and intends to return in May 2019 to do the same.

“I will also help with a home building project for unwed, uneducated mothers,” he says. “This is a project that also has huge impact on many lives there, and was started by Lightness. I’m also hoping to make a trip to Nepal in 2019 to work on another Journeys of Solutions project—helping many of the Sherpa people who are still struggling with the impacts of the last big earthquake there.”