Robert Stanley ’14 leads his school’s FIRST Robotics Team to the regional title. Next up: The world championships in St. Louis 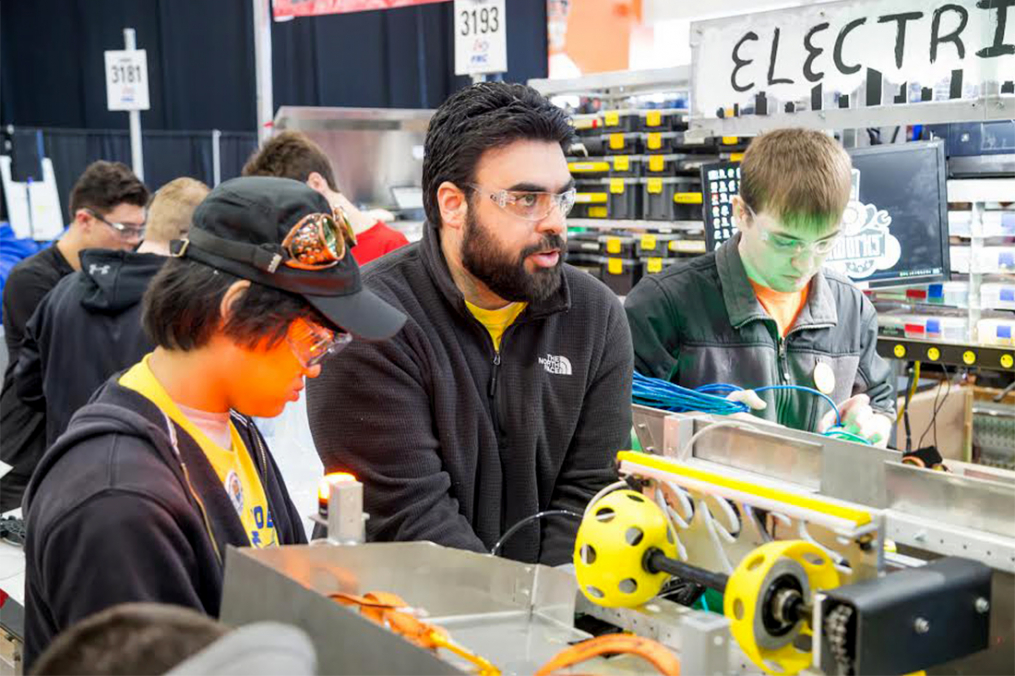 When it comes to driving student interest in often difficult-to-fill high school STEM classes (Science, Technology, Engineering and Math), sometimes a good teacher can do the trick. Sometimes it takes a robot.

Members of  “Electric Fire,” the FIRST Robotics Team at Notre Dame High School in Elmira, have both: Coach Robert Stanley ’14, and “Gearhead.”

The team’s third-year coach, his 20 members, and their creation shared first-place honors at this year’s Finger Lakes Regional FIRST Robotics Competition in Rochester.

“We went there to have fun,” says Robert of the March 17-18 event, at which nearly 50 teams from throughout upstate New York and southern Canada competed. “But we actually won.”

To do so, the grades 9-12 students needed to design and build a working robot, within a six-week window, that could:

Upon learning those requirements, “the students’ first reaction was overwhelming excitement,” says Robert, “because they’d been waiting for the details.”

Their next reaction was … a little different.

But Robert helped the team stay focused, says Jacqueline, who assisted in designing and building “Gearhead.”

“He’s very friendly,” says 15-year-old Jacqueline. “He makes us all laugh. And then when it’s time to get serious, he can make us listen.”

Robert credits the bachelor’s degree in Organizational Management he obtained through Keuka College’s Accelerated Studies for Adults Program with sharpening those leadership skills.

“The degree at Keuka College really helped me grasp the demands of the tech position,” says Robert, who is not only Notre Dame’s Director of Technology but teaches seventh- and eighth-grade tech classes. “Because it combines the management aspects of what I learned at Keuka College with the technology background I already had, it really helped me achieve the goal of becoming an IT manager.”

It wasn’t only the “what” of the degree but the “when” and “where” that attracted Robert, 32. While working on his associate’s degree at Corning Community College, he learned some of the teachers also instructed for Keuka College at CCC, one of the College’s satellite campuses.

And the one-night-a-week-classes worked around Robert’s “crazy” work schedule: “That was perfect for me.”

Now, he uses the robotics team as a back door to generating STEM interest.

“The robotics program is essentially the pinnacle of STEM,” Robert says. “It’s combining science, technology, engineering and math all in one competition -- and making it fun!”

Robert has also works to engage female students, who are notoriously underrepresented in STEM classes (and, as a result, STEM-related professions later in life).

“Most of out elite programmers have been female so we’ve really been trying to foster the idea that not only men can be engineers,” he says.

Members of the Society of Women Engineers – some who work at nearby Corning Inc. – are among the team’s mentors, the better to model female participation and success.

The attention and opportunity are appreciated by students like Kayle Watson, a senior and third-year Robotics Team veteran who hopes to continue her studies at the Rochester Institute of Technology this fall.

“They didn’t have a robotics team at the last school I was at,” says the 17-year-old Elmira resident, “so when I got to Notre Dame I was really excited.”

The team is now preparing for the FIRST Robotics World Competition April 26-29 in St. Louis. That requires a little practice and a lot of fundraising.

Stanley say transportation and lodging costs will surpass $30,000. A GoFundMe page has been established (Gofundme.com/ndhsrobotics2017) and other efforts are under way, including from team member Chen, who put her creative and construction skills to new use:

“I designed these really cool team buttons,” she says. “People can buy them for a dollar.”

The ‘FIRST’ in FIRST Robotics stands for: For Inspiration and Recognition of Technology. 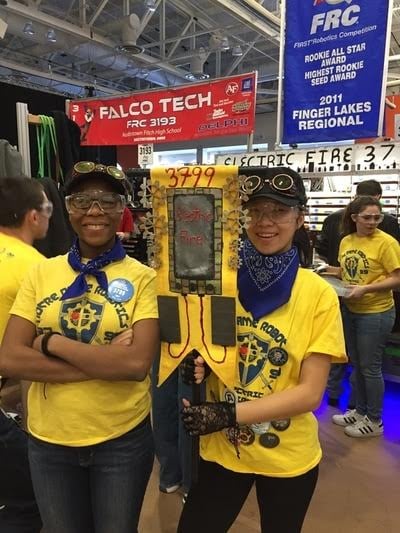 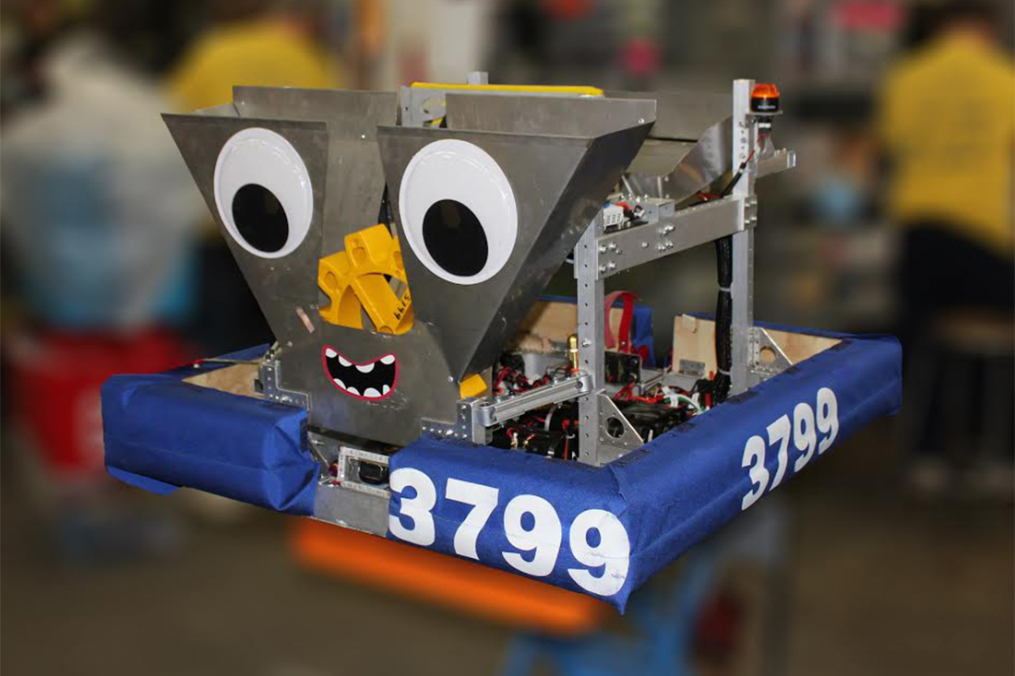 The robotics team had just six weeks to design and build "Gearhead." 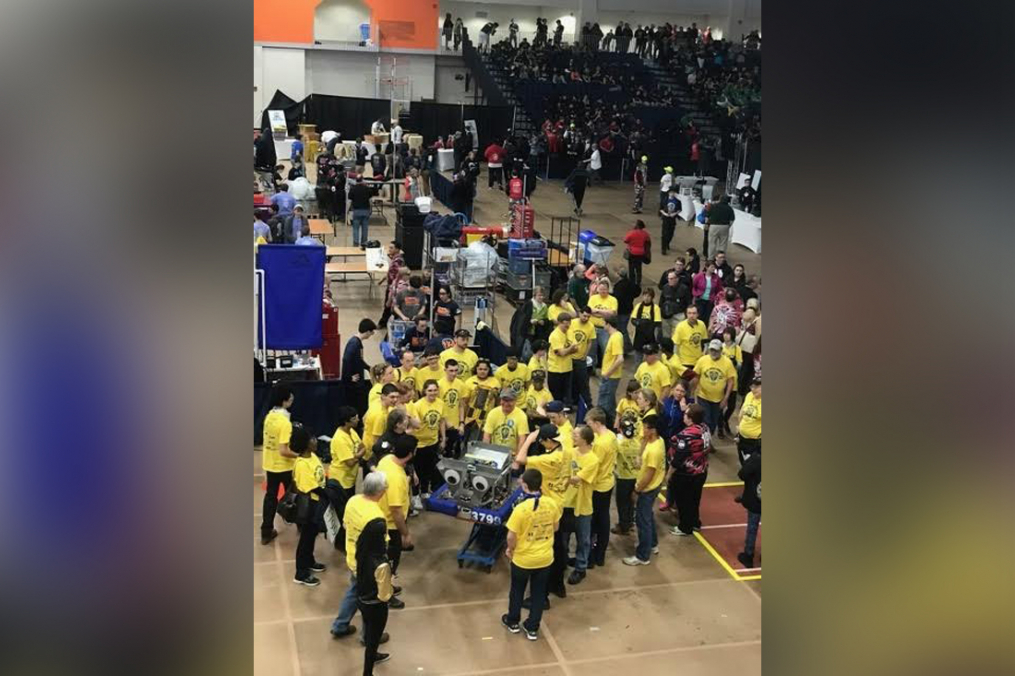 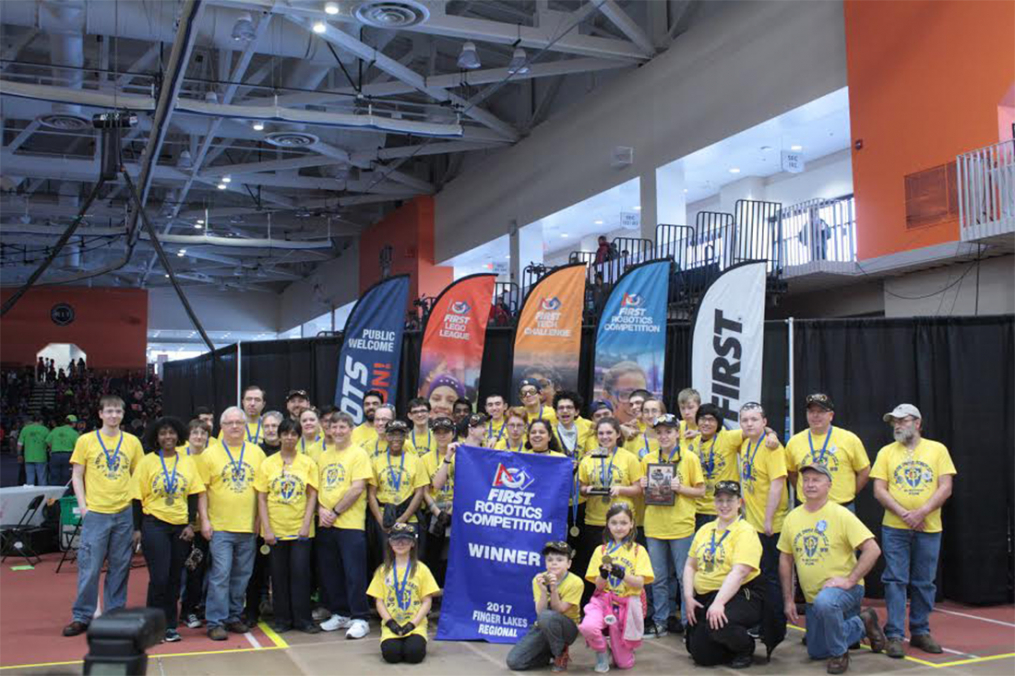