Lots of Keuka College roommates become friends for life. The Schlicht and Tucker families took it one step further. 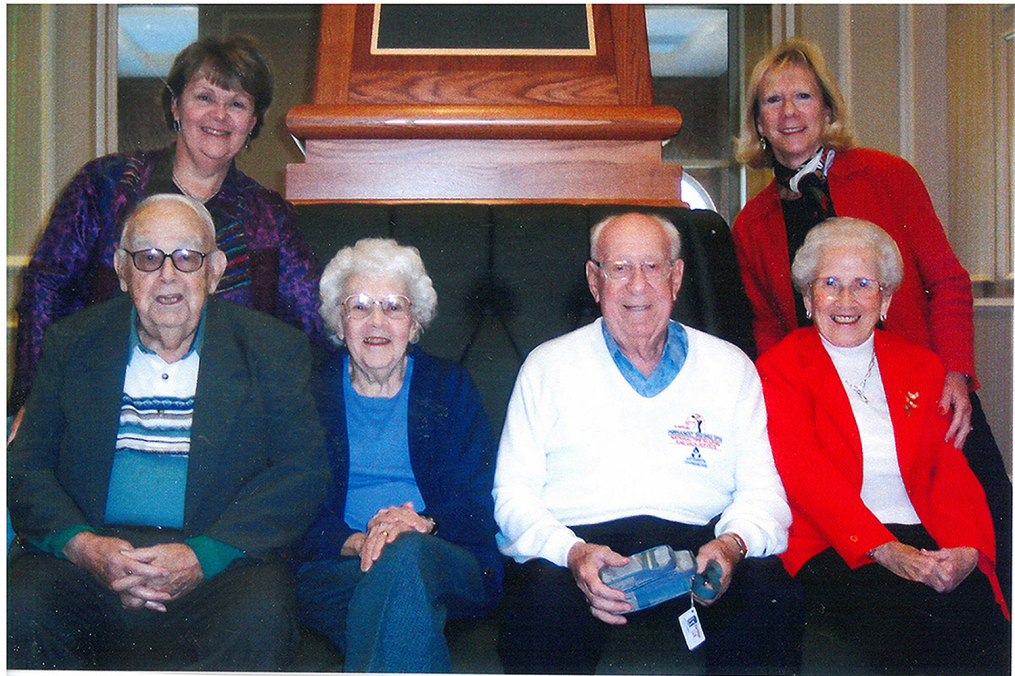 The Tucker and Schlicht families gather at Ball Hall for this circa 2008 photo. From left are Nancy (Tucker) Feligno ’72; her parents, Stanley and Edith Tucker; Kermit “Kerm” Schlicht; Mary Schlicht; and their daughter, Suzanne (Schlicht) Aquilina ’72.

Keuka College freshmen Suzanne Schlicht and Nancy Tucker didn’t have a lot in common when they met as roommates in what was then called Richardson Hall in the fall of 1968.

“She was an education major, I was nursing,” recalls Suzanne (Schlicht) Aquilina ’72. “She was from a small town, Little Falls, near Utica; I was from the city of Buffalo. “

Not only that, the roommates often weren’t even in the same room. Nancy (Tucker) Feligno ’72 sang in the College Chorale, which meant lengthy rehearsals and plenty of off-campus performances. Suzanne spent many weekends at Hobart and William Smith Colleges, visiting her future husband. Both had separate circles of friends.

“We were very different,” Suzanne continues. “That’s probably why we got along so well. After about six months we decided, ‘this is really working!’”

It worked so well, in fact, that the pair roomed together their entire four years at the College.

Still, while it may have taken Suzanne and Nancy a bit of time to connect, their parents got out of the blocks a little more quickly.

“I distinctly remember when we moved in as freshmen and our parents were all there,” Nancy recollects. “They were talking and my mom and Suzanne’s mother were chatting away, and my dad had a great sense of humor, as did (Suzanne’s father). And they just clicked.”

And they stayed clicked.

The start of a beautiful friendship

While it’s not uncommon for Keuka College roommates to forge lifelong bonds, seldom do their parents follow suit.

But such was the case with Suzanne’s parents, Mary and Kermit “Kerm” Schlicht, and Nancy’s parents, Edith and Stanley Tucker. After exchanging greetings in what is now Harrington Hall nearly 50 years ago, the two couples became the best of friends, staying in close contact, visiting regularly and even vacationing together for more than four decades.

Indeed, as the new graduates launched careers, took part in each other’s weddings (Suzanne married husband Alan in Norton Chapel), and started families, their parents saw more of each other than did Suzanne and Nancy.

“While we were raising our families, they would go on vacations,” Nancy recalls. “I remember saying to Suzanne, ‘They have more of a social life than we do!’”

The Schlichts and the Tuckers did not let the miles between Buffalo and Little Falls hinder their friendship. They would go away together “probably three times a year,” says Suzanne. Nothing elaborate: An autumn tour of the Adirondacks was a perfect getaway.

“They would get little timeshares,” says Suzanne, who holds a DNP and splits her time as a nurse practitioner and an adjunct assistant professor at the SUNY at Buffalo, School of Nursing. “It was just a matter of being together.”

That became easier when both couples wintered in Florida – just 45 minutes apart.

“They’d see each other once a week,” recalls Nancy, a lifelong educator who earned her master’s degree from Nazareth College through classes taken at Keuka College as part of an exchange program. She retired from the Geneva City School District in 2011.

Stanley, a science teacher, and Kerm, who worked for Chevrolet, shared a love of golf. Mary and Edith bonded over crafts and cooking.

But a sense of shared values was the glue that held the four friends close.

“They totally were the same down-to-earth, very humble, very appreciative, generation of World War II,” Suzanne says. “They didn’t take anything for granted. … They really shared a lot of the same values.”

“They absolutely did,” Nancy agrees. “The commonality was they worked hard, they raised their kids, they had a very strong value system, and they just persevered in good times and in bad. That’s the message I took from their relationship … and their friendship. It was pretty phenomenal.”

In fact, the close-knit connection moved beyond friendship and into extended family. When a soccer-playing daughter attended college at Hartford, Connecticut-based Trinity College, for example, every Fall Friday for four years Suzanne and Alan stayed at the halfway point of their drive to games from Buffalo: The Tucker home in Little Falls.

“I guess at the heart of it was, we always knew if somebody needed something and they called one of us, we would be there,” Nancy says.

They were there to share celebratory events, like birthdays, and in more challenging times, as when age and maladies in recent years claimed Nancy’s parents and Suzanne’s father.

Mary is still going strong, having blown out the candles on her 98th birthday cake in September.

“Through the really good times and then the path at the end, we stuck together, and they always enjoyed being with one another,” Nancy says. “Through all these years, they stayed close.”

And they never forgot where it all started.

“They loved Keuka College – they always were the best marketing people around,” Suzanne says of her parents. “They thought it was beautiful, and they saw what it did for my nursing career. … I felt Keuka College gave me the best foundation there could be.”

Suzanne’s service as a Trustee allows her to stay connected with the College.

“The expertise on the Board just boggles my mind,” she says. “There are business people, lawyers, educators, clergy, people who have just taken all different paths. It’s a nice, diverse, talented group.”

And because Suzanne stays with Nancy in nearby Geneva when back for College functions, her lifelong friend also reconnects.

“We just got along, enjoyed each other’s company and had good times together,” says Nancy. “And now we have 49 years of a friendship and memories. It is sort of unique. It’s special for us. And it ALL started at Keuka College!”