Helping the Homeless Get a ‘Second Wind’

Hannah Wilke helps those in need “understand they are valuable.” 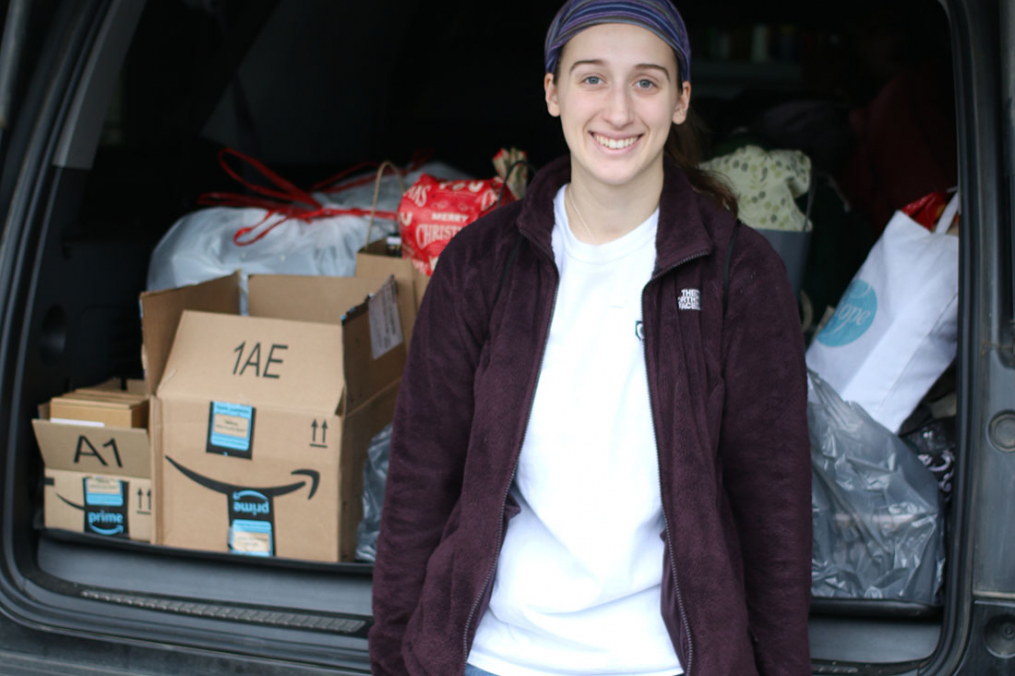 A few years ago, Carmen Guidi, the founder of Second Wind Cottages, spoke to the students in Keuka College sophomore Hannah Wilke’s Horseheads-area high school. The Ithaca-based organization provides shelter and a path to independence for homeless men. Those who reside in the cottages are given the opportunity to have their lives restored and permanently changed.

Once Hannah learned about Second Wind Cottages and its mission, she was eager to help.

“I remember being shocked that there were homeless people in my area, as I naively thought that they only inhabited large cities,” says Hannah, an occupational science major who recently spent two weeks around Christmas volunteering to help the residents of Second Wind Cottages. “At that time, I didn’t really know what I could do, and simply did nothing.”

Early in 2017, while attending a church service led by Carmen, Hannah was drawn to much more than God’s word. She began to understand that almost half of the other parishioners were, or had been, homeless.

“I quickly realized that not everyone is afforded the opportunity to attend a great private college, have a loving family, receive daily meals, have more than one outfit, or even have a place to call home,” Hannah says.

After learning more about Second Wind Cottages, and conducting research on homelessness, including Ithaca’s homeless encampment known as “the jungle,” Hannah wanted to spend a Field Period® helping, learning, and growing in her Christian faith. To further her efforts, Hannah received a Spiritual Exploration Field Period® Scholarship.

Keuka College’s Spiritual Exploration Field Period® Scholarship challenges students to work in an overtly spiritual or religious organization, such as a church, church camps, or religious charities. The student must also demonstrate that this Field Period® will engage his or her own spiritual beliefs in a clear way.

Hannah’s assistance to the homeless was all-encompassing: spiritual, physical, and financial. She purchased food for Christmas dinner, as well as providing the dozen residents of Second Wind Cottages with money to purchase presents for their children. Additionally, Hannah was able to bring blankets, tents, small heaters, food, and other items necessary for survival to residents of the jungle.

Welcome to the Jungle

“I visited the jungle more times than I can count,” says Hannah. “This experience was one of the most eye-opening things to happen to me, as I had no idea the extent of homelessness in my area. You walk behind Walmart and suddenly you’re in a different world. There are paths through the woods, and every 20 feet there is a tent or structure made of tarps. In these shelters, there are usually one to two people and, more times than not, a dog.”

Additionally, there is no place to put trash, go to the bathroom, or get clean water.

“Typically, the residents were happy to see us coming,” says Hannah. “When it’s extremely cold, the residents stay inside their shelters. So, in order to get supplies to them, you have to announce what you have by yelling out, ‘anyone need a blanket, or fuel, or a heater?’ It is extremely sad to see people living this way, and there is a lot of desperation and need.”

But Hannah adds that there is also love and kindness. For example, she says one individual would start a bonfire each time she and her group visited, and would invite the group to share the warmth.

While Hannah saw people without many of life’s necessities, she also saw hope in the stories of the people she met.

“One spiritual journey that really encouraged me was this couple who just lost their jobs and place to stay,” says Hannah. “They were completely without hope—and even wanted to die. My group was able to build a great relationship with them on their darkest night, and they decided they wanted to follow Jesus. Since that scary night, they are completely different. They have new jobs, are helping others, and, although they are still struggling, they are so filled with hope. They are even engaged now.”

Another story that really stood out to Hannah occurred on the last day of her Field Period®, New Year’s Eve.

“A group of us went to the jungle and brought chili,” says Hannah. “It was the coldest I have ever been in my life, and few people left their tents to meet us and eat. When I went to bring chili to one individual in a tent, he was crying because he was so dehydrated, and the extreme cold had frozen all of the water we had previously brought. My heart completely broke as he was literally dying before our eyes. Thankfully, we were able to get some warm water and fill up some propane for the heater and he made it through.”

Hannah believes that as a result of completing her Field Period® at Second Wind Cottages and her visits to the jungle, she grew tremendously as a person, and in her relationship with God. Overall, Hannah says her Field Period® allowed her to “grow in my faith, love, empathy, and the ability to stand up and do the right thing, just as Jesus would.”

She adds that at Second Wind Cottages, she was shown the type of love and giving the Bible talks about.

“I saw God work in so many other ways too,” Hannah adds. “Surprisingly, several individuals who have called the jungle their home for years decided that they had enough, and wanted to improve their situations by going to rehab. I was even able to help move one person out of the jungle! I could go on and on about the miracles that we saw—it is truly amazing. I was also strengthened in knowing that I can make a difference.”

While Hannah has completed her Field Period® requirements, the connections she made will remain with her.

“I will definitely go back and volunteer as I am able,” she says. “I am now part of a team of people working with the homeless in Ithaca, N.Y., and I am blessed to be involved with such a great group of people. The homeless in the jungle, and the formerly homeless men at Second Wind Cottages, are my friends. I know them by name, and I can’t imagine losing these relationships.”

“As one person, you can feel so small, but when you use your voice, and the platform that God has given you, and join others in fighting for a cause, much can be accomplished,” says Hannah.

Click here to learn more about Second Wind Cottages and how to help those in the jungle. You can also watch a video that Hannah and others, including students at Ithaca College, created.