Sam Burge ’98 and a group of OT alumni are changing the Rochester OT landscape. 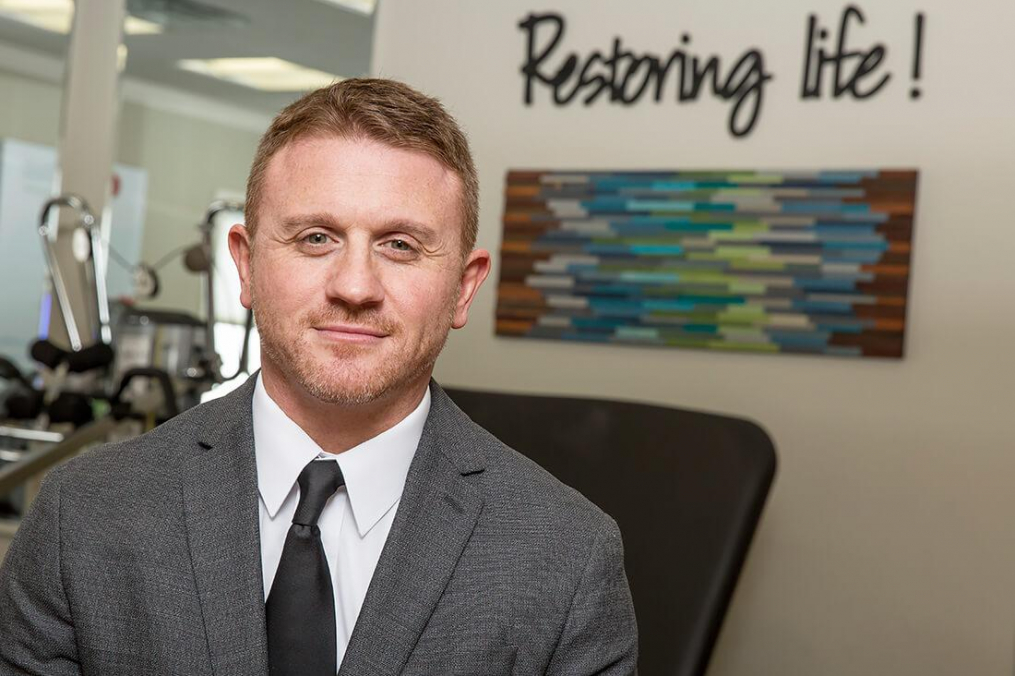 About a year after graduating from Keuka College with a degree in occupational therapy, Sam Burge ’98 noticed a significant challenge facing both the patients he treated and the Certified Home Health Agencies (CHHA) that provided care. Per Medicare definitions, a CHHA must discharge patients who are no longer considered “homebound.” Yet Sam saw other factors indicating that many patients still needed to continue therapy.

For example, seniors were often overwhelmed by the fast-paced environment associated with some outpatient facilities, while others feared leaving their homes or faced transportation challenges, he says. For any occupational therapist (OT) like him, the regulation created an ethical dilemma.

“As a therapist, you build relationships with people. You care about them. I just couldn’t cut them loose and say ‘Good luck,’” he explains. Inspired to provide continued care for clients, Sam decided to open his own occupational therapy practice, to provide another option he felt seniors—and therapists—in his community needed.

Within six months, Sam began to market what he named Freedom Therapy (FT) Services, and the company incorporated shortly thereafter. As Sam sees it, home care defines the heart and soul of his company, which now employs 170 people. Headquartered in Brighton, the FT work force of occupational therapists, physical therapists, speech therapists, massage therapists, and para-professionals continues to specialize in adult and senior rehabilitation and provides outpatient, in-home, and inpatient care.

“We go where the patients go; we’re not limited by the walls of a facility,” Sam says.

Freedom Therapy also boasts another unique distinction: numerous staff are Keuka College OT graduates. According to Sam, it used to be a company joke that all the managers were Keuka College OT alumni. “We have some PTs and other non–Keuka College grads on our management staff now, but most are die-hard Keukonians,” he says.

Keuka College OT students seem to regularly conduct a Field Period™ or graduate fieldwork placement with his company, too. For example, when Laura Ritchie Cole ’08 M’09 conducted her Level II OT clinical placement with Freedom Therapy at Leroy Village Green in her graduate year, her supervisor was Megan Lovejoy ’99, who joined Sam’s company in 2007.

“It makes you very proud to see a Keuka College student learn from you and then to be able to recommend them for a position, and see them become promoted within the company,” Megan says, describing how Laura not only stepped into her first full-time job with FT, but is now the OT therapy coordinator for FT at the Villages of Orleans facility in Albion.

As with each skilled nursing facility partner, FT serves as a third-party provider of therapy services. As the clinical OT on site, Laura oversees a staff that includes a physical therapist (PT), two PT assistants, a speech therapist, and a certified OT assistant.

Her counterparts at other FT sites include Lara Press Ellingham ’94 at Crest Manor in Perinton, LaTanya Buckner ’96 at Aaron Manor in Fairport, and Amy Sovinsky Smith ’01.

“I think Sam always wants to stand apart in terms of not being seen as another group of therapists in a home, doing what every other group does,” says Lara Ellingham, describing how her team developed a Parkinson’s rehab program that Sam empowered them to market. “At other FT homes they’ve tried to create niches that will set them apart as well, so we’re covering every therapeutic discipline and having an active role in that.”

Mentoring and sharing are other factors that come into play at Freedom Therapy. For example, Amy’s team is launching its own Parkinson’s treatment program, and she has been working with Lara to follow the model already in place in the Perinton facility. That same spirit of teamwork radiates throughout the company’s commitment to provide continuing education for staff as state regulations increase and change.

FT offers workshops about one night a month on various care topics, and OTs from within the organization who may hold certification in specialized treatments have volunteered to serve as instructors for other staff. Whether it may be training on a new lymphedema treatment, new regulations, or a shift to electronic documentation, “everything’s internalized, and we all learn from each other, which is great,” Laura Cole says. “Nobody ever has an issue answering questions, and there’s always someone to turn to.”

That company culture is due in large part to Sam and another Keuka College OT, Lori Moskal Stewart ’02, Sam’s second in command, overseeing all skilled nursing facility sites.

“Right away, I wanted to get the different facility site coordinators together to feel like one team,” Lori says, describing how an OT at one facility who may be struggling to treat a patient with a complex hand problem can consult with an OT at another facility who may be an expert in hand rehabilitation. “We tried to create a family of therapists and a safe haven where the therapists feel like they can support each other, so it feels like they work for FT and not the nursing homes.”

According to Lori, Sam continues to interview every individual the company hires to ensure that they share his passion for quality care.

As staffers have expressed interests in specialty areas such as education or documentation, Sam has worked with them to create jobs they love, while also benefiting the company and clients, Lori added. For example, if a working mom wants to scale back her hours or job-share with another staffer to focus on her family, Sam tries to accommodate her.

He also instills in his staff the value of care that is not necessarily billable.

Irene Moskal was a 44-year OT veteran who left the Syracuse facility where she’d worked 22 years to start at one of Sam’s Auburn sites in preparation for a move to Rochester, closer to her grandchildren. Today, Irene supervises a five-member FT staff at the Latta Road Homes in Greece. Years ago, Irene earned her OT certification through a process known as “career-laddering,” by completing clinical rotations at Upstate Medical University Hospital under a mentor by the name of Peter Talty, who invested 25 years at Keuka College as a revered OT professor. He was the initial link that drew Irene’s daughter—Lori—into the profession and to the College. So Irene doesn’t hesitate to specify what makes her happy to be working for Sam now.

“Although you never get away from having to produce numbers, he’s more about quality outcomes instead of just minutes of treatment,” Irene says, contrasting that with other companies where staff may be required to log treatment minutes, regardless of whether the patient is truly improving. “I can’t deal with my staff that way. I tell them: ‘Do the best you can with each resident.’ That’s what counts. Sam wants us to always be ethical, and he backs us up.”

Relationships remain the heart of the profession, Sam says, calling occupational therapy a career like none other.