For Keith Prestano '13, a League of His Own

Keith Prestano ’13 has gone from patrolling the outfield for Keuka College to running his own division in the Interstate Collegiate Baseball League. 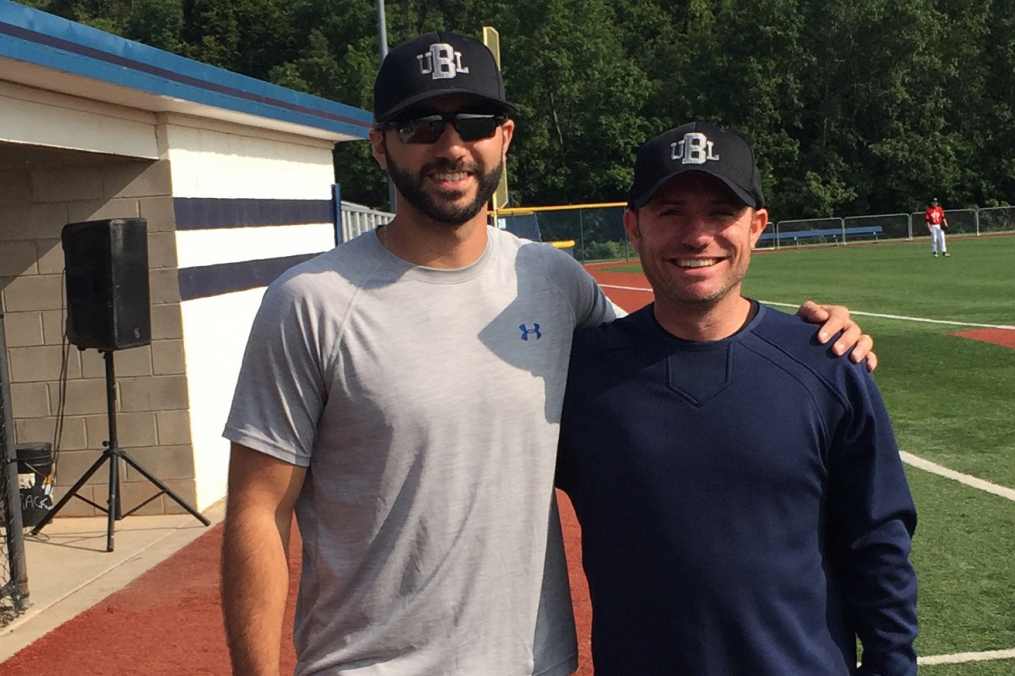 A love of baseball came early to Keith Prestano ’13. A lifelong Yankees fan, he recalls following the team’s march to World Series victory in 1996 – when he was just five years old.

“I remember all of them,” he says of the Bronx Bombers’ ’96 lineup. “I used to do the scorebook in front of the TV with my dad.”

Fast-forward 20 years and Keith has followed that season’s American League Rookie of the Year, Yankees shortstop Derek Jeter, on a similar career track: From player to owner.

Even as future Hall of Famer Jeter awaits Major League Baseball’s approval of his move to become co-owner of the Miami Marlins, former Keuka College outfielder Prestano has assumed ownership of not one, but three teams.

From outfielder to insider

The teams are the Flyin Fish, the Lake Monsters, and the Monarchs, and they make up the Rochester Division of the Interstate Collegiate Baseball League.

The 12-team league allows college-level players to continue to hone their skills during the summer. Players must be college-eligible, Keith says, and while many are Division 2 or 3 veterans, a few have their eyes on a major-league prize.

“We have had a few kids that are playing Division 1 baseball, that their main goal is to play professional ball,” says Keith.

The leap from ICBL to MLB isn’t impossible.

“We had two scouts that came out and watched our games throughout the past season,” says Keith. “It was nice to see some recognition of that. But I’m hoping to bring in a little bit more attention.”

The 30-game season is held entirely in the evenings, so players can attend to day jobs or studies before hitting the field, says Keith. He says selecting talent is one of his major responsibilities as an owner.

“We only accept 70 to 80 players, and we get 120-plus applicants, so it’s competitive,” he says. “We check the stats. See how well they did in school ball. … I’ll look at the application, then send it to the Board of Directors. They’ll review it. Then we all get together and it comes down to seeing if this kid’s got the talent, the drive – if he’s capable of playing.”

Keith knows what he’s talking about when it comes to judging talent. The Astoria, New York, native capped off his four-year College baseball career by being named the 2013 Dana Schillinger Outstanding Senior Male Athlete of the Year.

“I was very fortunate to play at Keuka,” he says. “It was nice to play as a freshman and all through my (College) years.”

By the time he hung up his cleats and grabbed his diploma, he had twice earned all-NEAC honors, and was among the College’s all-time top 10 in doubles, home runs, RBIs, games played, at-bats, and batting average.

One of the keys to that success, he says, is the College’s Associate Athletic Director Jeff Bray, who Keith cites as a personal mentor.

“Jeff set high standards for the programs there that are very successful for Keuka College sports,” Keith says. “He was always around our games and supported our teams.”

Off the field, Keith earned a bachelor’s degree in ASL interpreting, which he took to Gallaudet University in Washington, D.C., where he coached Deaf and hard-of-hearing baseball players from 2013-14. It was there he worked alongside former professional baseball player Curtis Pride.

“I learned a lot from Curtis,” Keith says. “Recruiting, getting to know players on a personal level, creating trust, building trust through on-field and off-field experience. Basically, working with the player to develop what they need.”

Full circle on the diamond

These days, among the players Keith helps develop are some who now wear the uniform he once donned.

“It’s all about getting the kids playing time,” says Keith, “developing skills.”

It was a developing romance, oddly enough, that brought Keith into connection with Rochester-area baseball.

Having met his wife to be, the former Caroline Menaguale (’13), Keith decided to stay in the area by pursuing a Field Period® opportunity in Rochester in 2012. That was the year the Rochester Collegiate Baseball League formed and he played with them. The connections eventually brought him to the ICBL.

“If you love the game of baseball, it’s worth the investment,” says Keith of buying into the league. “You’re not making a lot of money but it’s fun to see the kids have fun and develop."

The Canandaigua resident hopes to see more of that development very soon, with plans to expand to a fourth team in Rochester next year, and into Buffalo within the next two to three years.

But ultimately, he says, the most rewarding aspect of owning teams comes from a place he never stepped foot as a player: the stands.

“Honestly, I love talking to the fans,” Keith says. “Most of the games, I go out into the crowd and talk to the fans and they tell me how positive and how great the league has been, and that gives me a good feeling. Just watching the game and thinking, ‘Hey, I did this.’”