Kindness, Leadership and a Love Story 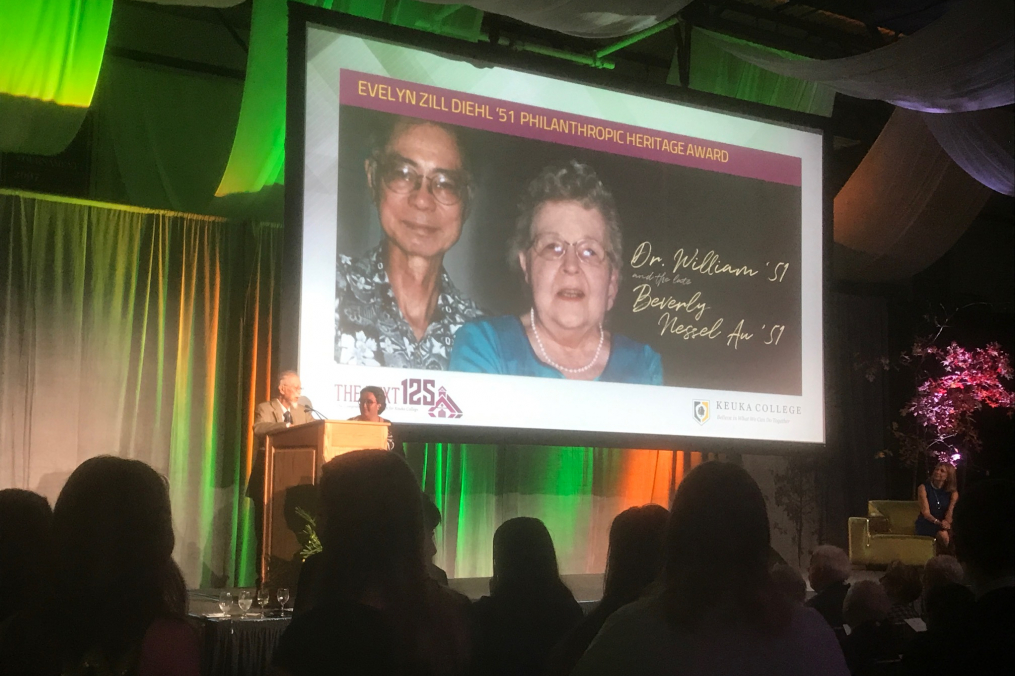 Bev Nessel and Bill Au were a pair of post-World War II college students who didn’t even attend school in the same state when they met during a church service project in 1949.

But bonds between the future Beverly Nessel Au ’51 and Dr. William Y.W. Au ’51 took root in and around the Keuka College campus. As such, the fates of the couple and the College remain interwoven to this day.

Beverly passed away almost 10 years ago, but her memory and devotion to the College live on in the Beverly Nessel Au ’51 Scholarship.

“Beverly wanted to help others like her,” says Bill. “Those from upstate New York, small towns, who have lesser opportunities to go on to College but who could develop into leaders.”

It is just one of the many ways in which the Aus have sought to strengthen the College over the years. Aside from the scholarship, the couple has supported the Campaign to Save Ball Hall, the Shaping the Future: One Graduate at a Time campaign, and the Keuka Fund.

“We would give to both our Colleges,” recalls Bill, a Boston University graduate. “But she would always say, ‘Keuka College needs it more.’”

Because of their long history as enthusiastic and dependable champions of the College, the Aus were the recipients of this year’s Evelyn Zill Diehl ’51 Philanthropic Heritage Award, which recognizes supporters who have made the College a significant part of their planned giving legacy. The award was bestowed during the Green & Gold Celebration Weekend Gala on Friday, Oct. 13, at the JMW Recreation and Athletics Center.

Beverly arrived in Keuka Park from Rome, New York, the first in her family to attend college. She was attracted to Keuka College by what was then a relatively new program.

“She was searching for a college that would give her work experience as well as learning,” says Bill. “She chose Keuka College because of the Field Period®, because she could work in the community.”

Beverly earned a degree in Christian Education and was president of the Religious Club. So it’s hardly surprising she and Bill met while taking part in a church service project.

What is surprising is that Bev, a Keuka College student on a Field Period® experience, and Bill, a Hawaiian native attending Boston University, met in the unlikely location of William Penn College (now William Penn University) in Oskaloosa, Iowa.

They were there to train in preparation to help rural, Midwest churches develop youth ministry programs. Since they were the only two students from the East, Bev and Bill were selected as half of a four-member team that would spend six weeks touring and teaching at regional churches.

“So we did that for four weeks,” Bill recalls. “And in the fifth week, it was canceled.”

The problem: A polio epidemic was sweeping the region. This led to another problem.

“Bev and I were sort of caught,” Bills says. “We then had to make immediate arrangements to return east, Bev to Rome and I to Boston.”

Of course, there was an upside.

“Travelling together,” Bill says, “we got to know each other better.”

As a result, Bill spent his junior and senior years at Boston College making “two or three weekend trips a month to Keuka College.” Sometimes it was a train to the Syracuse bus station, and on to the College; other times, splitting the driving with a car-owning friend.

“Route 20 was – ugh! – it was a long drive,” he recalls. “Especially during January, when it as very cold in the evenings. ... It always took us at least eight or nine hours. There was no Thruway.”

Not that there was any question of cutting back on the trips.

The couple married in 1952 and Bill set to work pursuing his medical degree, and then a career. Education and job opportunities took them to Watertown, Massachusetts; Syracuse; suburban Maryland; Rochester, New York; Little Rock, Arkansas; and finally, back to upstate New York. (A two-year stint as an Air Force medic for Bill added Montgomery, Alabama, to their list of residences.)

“She had to suffer through a lot of my career ambition,” Bill says of Bev. “She had a lot of patience.”

And a lot to keep her busy. Aside from raising the couple’s four children, Bev was building her own resume, largely in the field of Christian education.

“She got her first job in the First Presbyterian Church, as director of Christian education in Little Falls, New York,” Bill recounts. Bev also held positions at churches in Watertown, and Little Rock, as well as working alongside University of Rochester Research Associate Marion Gleason in researching and editing a reference book on toxicology put out by the University of Rochester Medical School.

She even ran her own business – a needle art store in Norwich, New York, for about five years.

“Commercially it was not a success, but culturally, it was a great success,” Bill says. “A lot of the older adult women who were living by themselves would just drop by the store and stay and talk and get lessons in needle art. But then, it was something she wanted to do not to earn money but to provide a service.”

Through it all, Bev maintained her ties to the College. Bill’s ties grew stronger, as well.

“Every time there was either a class reunion or she would have to go to Keuka for a meeting with class leaders, she dragged me along,” Bill says with a laugh, adding playfully, “actually, it was because she needed me to drive.”

Perhaps, but Bev had drive of her own.

Aside from community service responsibilities in and around her hometown of Sherburne, New York, she helped plan her class’s 45th reunion and was a member of the Class of 1951 50th Reunion Committee. The couple also increasingly supported the College financially, as well as personally.

“She remained in contact with the alumni association and with classmates,” Bill says, “And she always brought me into it.”

Indeed, such was Bill’s involvement and support that he has something that was almost unheard of until the College went co-ed in the 1980s: A Keuka College class year after his name. Dr. William Au ’51 was made an honorary member of his wife’s graduating class.

“After Bev died, in 2008, the class leaders came all the way from Keuka to attend her memorial service in Norwich,” Bill recalls. “We got talking and they said, ‘we don’t want to lose contact with you.’ And then, later on, I found out the class voted me an honorary member.”

It was an easy decision, says Dorisanne Weimert Osborn ’51, a religious education major alongside Bev and a longtime friend of the couple.

“After Bev passed away, Bill continued to be very involved with the College,” she says. “So we felt that he was worthy of – I hope it’s an honor! – to be a member of our class.”

It is not surprising to anyone that has known the Aus, or who knew Beverly, that the scholarship that bears her name is given in recognition of a student who exemplifies kindness and leadership.

Beverly and Bill Au have shown their kindness and leadership repeatedly over the years, through their personal, financial and moral support of the College.

This is just one of the reasons the Evelyn Zill Diehl ’51 Philanthropic Heritage Award is being presented this year to Bill in recognition of Beverly. The award honors those who have made the College a significant part of their planned-giving legacy.

Legacy is a fitting word.

Beverly graduated from Keuka College in 1951, but it remained an important part of the life she and Bill shared and built. In a way, she never left. And now, thanks to the Beverly Nessel Au ’51 Scholarship, she never will.