This year's "Who is Penn Yan?" project flips the script. 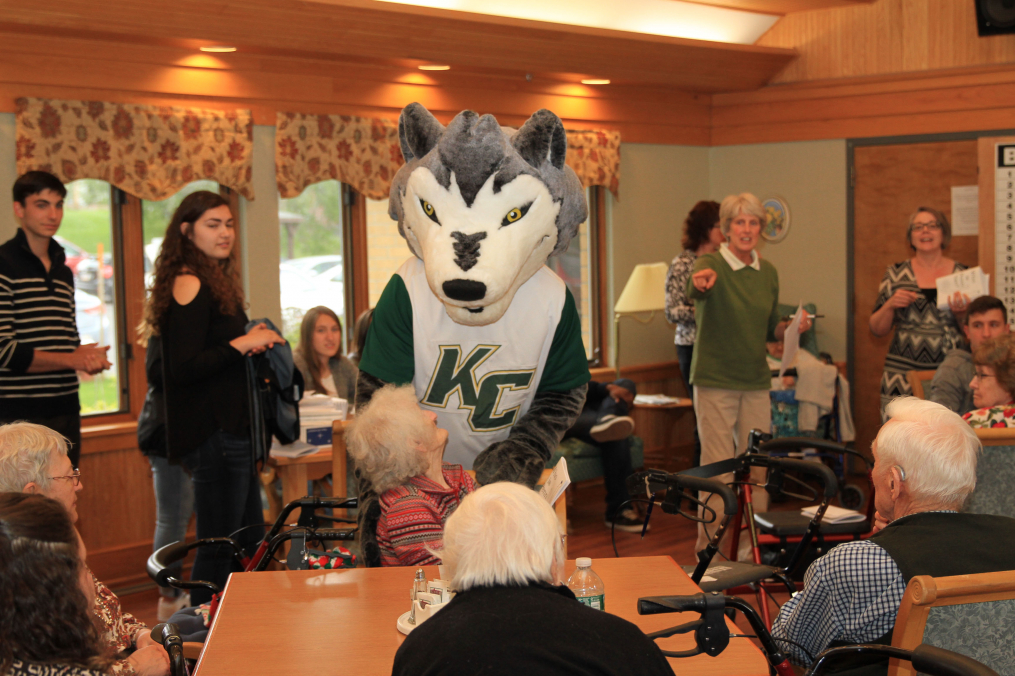 Her story, “The Luminous Life of Loretta,” is included in the newly printed collection, “Who is Penn Yan?”

I believe I have figured out “Who is Penn Yan?” at least from Loretta’s perspective. For her, Penn Yan is like a base of operations for her to care for everyone, while also herself at the same time.

“The Luminous Life of Loretta,” by Savannah Borza (“Who is Penn Yan?” Vol. 4)

The fourth edition of the publication includes nearly two dozen profiles of Penn Yan residents, all penned by students in the College’s Associate Professor of English Dr. Jennie Joiner’s “Literature in the Wider World” class.

The stories came about through repeated student interviews last fall of residents at the Clinton Crest Manor assisted living facility. And they show that many an ordinary-seeming neighbor has lived an extraordinary life.

Take Savannah’s profile subject: Loretta Daily, a former Rochester-area resident who moved to Penn Yan about five years ago. She was married twice – once at 17, a union that lasted 38 years and begat six children; then to the widower of her late best friend. She showed Chihuahuas at dog shows, and even captured first prize in her division one year at the annual Westminster Kennel Club Dog Show in New York City.

“It was wonderful to work with her,” said Savannah. “I got to learn Penn Yan a little better just through Loretta.”

That’s one of the points of the program, said Joiner, who also chairs the College’s Division of Humanities and Fine Arts. She emceed a culmination of the project Tuesday, May 2, at Clinton Crest, bringing students and subjects together to hand out the books during a celebratory reception (with help from College mascot Casey).

“It was very magical watching my students interact and talk with you, and reading the stories that resulted,” Joiner told the residents on Tuesday. “It brings Keuka College into the Penn Yancommunity, and we thank you for being representative of the Penn Yan community and sharing yourselves with the students. It’s a great way of learning about each other.”

Joiner launched the program four years ago as a way to provide her students with hands-on experience in interviewing and story development. By collaborating with their story subjects, students gain a better appreciation of literature as a gateway to understanding the wider world, as well as greater knowledge of Penn Yan through those who call it home.

The three previous “Who is Penn Yan?” installments saw College students interviewing elementary school students in the local class of Terry Test, herself a 1973 Keuka College graduate. Test retired last June after 43 years in the classroom, but she wasn’t ready to give up instruction – or, especially, the “Who is Penn Yan?” project.

After taking up volunteer duties at Clinton Crest, Test proposed focusing the project there. Add receptive management, and equally receptive residents, and students were soon gathering personal histories from decades past.

“For the residents to open up, and for us to watch the engagement the College students offered them – I was thrilled,” said Test.

“I think it took it to a different level,” added Erica Sirianni ’18, who shared the lives of three Clinton Crest residents – Judy Bailey, Donna Welton and Pat Murphy (a 1946 Keuka College graduate) – in her story “The Dundee Girls.” “I got to experience Penn Yan in a whole different way.”

Our lives are a story where every life has extraordinary moments. Through the ups and the downs our story touches people. We all have a different story yet a meaningful one.

And with those life stories come life lessons.

“It was insane! Incredible!” said Jay Grugnale ’18, who profiled Mary Ann Guarney in a piece that is part poem, part interview. “She gave me great perspective and made me ask questions I wouldn’t normally think to ask: ‘Do you have any regrets?’ ‘What inspires you?’ ‘If you had to change one thing, what would it be?’”

“I can’t overemphasize how important this project is, not only for Keuka College but for the residents,” College Provost & Vice President for Academic Affairs Paul Forestell said at the gathering Tuesday. “It emphasizes the importance of everybody’s story.”

Any hesitancy Clinton Crest residents may have had about sharing those stories with College students evaporated almost immediately, said Rosanna Bates, the facility’s activities director.

“Ten minutes into the first session, there was just a buzz,” she recalled. “And nobody was in a hurry to go home.”

Joiner said the program is the epitome of the type of experiential learning in which the College specializes. And she noted students took special care with the real-life stories entrusted by the elders.

“They were really great mentors for the little kids (in years past),” she said, “but the stories this year rose to a different level of writing. They were writing for adults.”